Logos’s Free Book of the Month promotion is offering an excellent commentary once again for the month of June. Until the end of this month, Logos users can download Anthony Tomasino’s contribution on Esther in the Evangelical Exegetical Commentary (EEC). If you are not familiar with the Evangelical Exegetical Commentary is a 44-volume commentary series published by Lexham Press, a division of FaithLife / Logos. The commentary incorporates the latest critical biblical scholarship” and “a distinctly evangelical perspective” and is in many ways similar to the Word Biblical Commentary or Baker Exegetical Commentary. The series was originally planned as a traditional print series but was dropped by the original publisher. Lexham picked it up a few years ago and has been publishing new volumes in the Logos system as they are released. (See this list of volumes, authors and publication dates.)

Anthony J. Tomasino (Ph.D., University of Chicago) is the Director of the Biblical Studies Program and associate professor of Bible, Old Testament and Hebrew studies at Bethel College in Mishawaka, Indiana and is well-known for his Judaism before Jesus: The Events and Ideas that Shaped the New Testament World (IVP, 2003). He wrote the Esther commentary in the Zondervan Bible Background Commentary of the Old Testament. 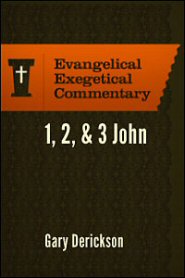 In addition to the Free Book of the Month, Logos is also offering Gary Derickson’s 1, 2, & 3 John commentary in the EEC. Derickson has a Ph.D from Dallas Theological Seminary and is currently Professor of Biblical Studies and Greek and Chair of the Bible and Theology department at Corban University.

This is another great giveaway from Logos I can think of no better use of 99 cents than adding these two resources to your Logos library. In addition to the free and nearly free books, you can enter to win the entire Evangelical Exegetical Commentary Series (a $999.95 value). I think this is the most expensive giveaway Logos has had since the started the promotion.

Both of these books are excellent additions to your Logos library, so make sure to add them to your library before the end of the month.