Logos Bible Software is offering another nice little in their “Free Book of the Month” promotion.  Partnering with Fortress, Logos is giving away a copy of Spirituality of the Psalms by Walter Brueggemann. This 96 page book was originally released in 2001 in the Facets series and is an abridged version of his Message of the Psalms.  Brueggemann is an engaging writer who has written often on the Psalms, so this is a welcome addition to any Logos Library. 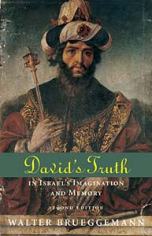 In addition to this free book, Logos is also offering an “almost free” book, Brueggemann David’s Truth: In Israel’s Imagination and Memory (Amazon). This is the second edition, published by Fortress in 2002 as an update to the 1985 edition. The second edition permitted Brueggemann to interact with several recent monographs on David. As he says in the introduction to the second edition, Brueggemann was moving away from historical criticism in that first edition toward “rhetorical and sociological dimensions of interpretation.”

The book is only 99 cents for a limited time. Be sure to enter to win a 24 Book Walter Brueggemann collection ($399 value!)