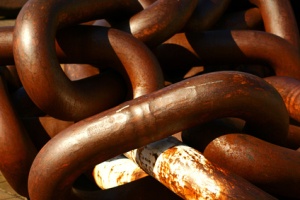 The first two chapters of Galatians dealt directly with the relationship of Paul and the Jerusalem Church. In these chapters Paul has claimed that he was commissioned directly by God to preach his gospel to the Gentiles (1:1-2, 11-12) and that he is not under the authority of the Apostles in Jerusalem (1:13-24). In fact he consulted Jerusalem only when his success among the Gentiles raised the question of circumcision of converts (2:1-10). The pillars of the church at Jerusalem agreed with Paul that Titus ought not be circumcised. Later, Paul confronted Peter publicly for breaking from table fellowship with Gentiles. Clearly Paul is independent of the Jerusalem church.

Beginning in Chapter 3, Paul will begin to create an argument from Scripture which shows that God is doing something new in the Gospel. While the prophets of the Hebrew Bible often foresaw the salvation of the Gentiles, they described this salvation as a “conversion” to the God of Israel. The nations will come to Zion to worship, but (presumably) they will keep the Law as members of Israel. In the present age, however, Paul argues that Gentiles are able to be right with God apart from the “works of the Law.” This is Paul’s contribution to salvation history, something which he has already called a “revelation from God” in 1:11-12.

Paul packs together several texts from the Hebrew Bible to make this point, and requires a great deal from his readers. They need to now only know what these verses say, but also the context in which they are found. That Abraham believed is important, but when he believed is critical to Paul’s point: it was before the sign of the covenant was given (Gen 15, not 17) or before his great demonstration of faith in Gen 22. The model of Abraham’s faith shows that it is only through faith that one can be accounted as righteous.

The reader of Galatians needs to know the whole flow of the Abraham story in Genesis 12-24 in order to understand the full impact of Paul’s argument. Similarly, the quotation of Habakkuk 2 calls to mind a whole collection of events: the fall of Jerusalem and the Exile are the context of Habakkuk’s “complaints.” In response to the obvious fact that Israel and Judah have fallen under the curse of the Law, in Habakkuk they “righteous” must live by faith. Even to say that those under the Law are “under a curse” requires more of a reader than the single line from Deuteronomy cited by Paul. Paul’s argument is based on the whole deuteronomic theology of curse and blessing.

The density of this argument leads to a question concerning what is happening in Paul’s Galatian churches. If Paul is addressing pagan converts to Christianity, then would they appreciate the rhetorical impact of this scriptural argument? Possibly. But based on Paul’s speech in Acts 14 and 17 (clearly pagan audiences) and the letter to the first Thessalonians (with very little reference to the Hebrew Bible), it appears that Paul would not have made an argument based on the Hebrew Bible to a recently-converted from paganism congregation.

Two possibilities remain to explain Paul’s scriptural argument in Gal 3, although they are not mutually exclusive. First, Paul could be addressing God-fearing Gentiles, people who were already practicing a form of Judaism and were now being advised to fully convert to Judaism in order to be right with God. Second, Paul may be using these scripture because they are the texts used by the agitators in his churches. If Abraham were a proto-typical Gentile convert to Judaism, then perhaps one could argue that the sign of the covenant with Abraham was circumcision, therefore a present-day Gentile convert ought to following in Abraham’s faith and fully convert.

How does understanding the “curse of the Law” as an allusion to Deuteronomy’s “Blessing and Cursing” change the way we understand Paul in this passage?

Paul describes the Law as a guardian or supervisor (3:23-26, 4:1-3). This is a metaphor drawn from the well-known practice in the Greco-Roman world of assigning a slave to assist in raising one’s children, from six years into the late teen years. Typically a wealthy family would purchase a slave and assign him to the role of pedagogue, παιδαγωγός.  This man would have been captured in war, perhaps a man who had some education, but was too old to work.

The guardian was not a teacher, although they may have assisted with learning.  They were responsible for taking the child to his teacher and would keep him focused during his studies (sometimes with a stick!)  The pedagogue was to be the moral guide for the child.  Since a child was thought to be ruled by passions rather than by reason, the pedagogue was supposed to rule in those passions and teach the child how to live by reason.  Plato describe the pedagogue as a horse’s bridle which restricted the natural passions of the child (See Plato, Laws, 808e).

Once a child “came of age,” there was no longer a need for the pedagogue, the child was “free” from their guardian.   While a pedagogue may still be respected and honored, after the young man has reached maturity, the relationship ought to end.

In the literature of the Greco-Roman world, a pedagogue was sometimes characterized as rude, cantankerous, rough on their charges etc.  Literature, however, does not always reflect reality.  Think of how Victorian era British nannies are characterized in literature or film – sometimes they are witches, other times they are wonderful in every way. With respect to sexual morals, the pedagogue was a “strict kill-joy” (Young, 161).

But Paul is not emphasizing all aspects of a pedagogue.  The nature of a metaphor is that some elements are highlighted, others are not.  For example, that some literature describes the guardian as a slave-drive does not mean that Paul wants to describe the Law as a slave-driver.  Nor does Paul want to communicate that the Law was a “kill-joy.”   According to Romans 7 the Law is the perfect will of God, so it cannot be characterized as a wicked nanny.

The main point of the metaphor is that the role of the guardian is temporary.  Once a child has reached maturity, the guardian no longer has any official authority of the child, and the child is foolish to continue to live under guardianship any longer.   In fact, Paul will later describe the leading of the Spirit with a word related to a pedagogue. His point in this metaphor is that salvation history as moved on to a new age, from the Law to the Spirit.  One is foolish to go back to the old guardianship of the Law once again.

Bibliography: Much of this material is drawn from Norman Young, “PAIDAGOGOS: The Social Setting of a Pauline Metaphor,” Novum Testamentum 29 (1987): 150-76.  This is by far the best article on the pedagogue in the ancient world.  Young’s more popular level article has illustrations of pedagogues from Greek art, “The Figure of Paidagogos in Art and Literature,” BA 53.2 (1990): 80-86.  Witherington has an excursus on the Law as a Guardian in Galatians, 262-7, although he too is following Young.