Introduction. Romans commentaries are usually as concerned with Pauline Theology as the exegesis of the text. This is natural, since Romans must be the center of any attempt to systematize Pauline Theology. As I have observed in a few previous posts, it is difficult to create any sort of systematic theology (especially Soteriology) without standing on the foundation of Paul. Romans commentaries therefore often must wade into the murky waters of systematic theology in ways that Gospels commentaries usually do not. 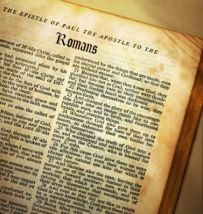 Another factor to consider is the New Perspective on Paul. Since the mid 1970s there has been a move away from the more traditional of Paul found in Augustine and Luther (and represented by traditional Reformed commentaries on the book of Romans). E. P. Sanders sought to read Paul as a representative of Second Temple Period Judaism rather than through the lens of reformed systematic theology. His observations have been challenged, but the influence of this “new perspective” casts a shadow on every commentary written on Romans written in the last 25 years. I have included Dunn (representing the New Perspective) and Cranfield and Schreiner (representing the Traditional View).

C. E. B. Cranfield, Romans (ICC; 2 vol. Edinburgh: T&T Clark, 1975). Cranfield replaced the venerable Sanday and Headlam volume on Romans in the ICC series (available for free via Google Books). Since that volume appeared in 1904, much has happened in Pauline studies! Cranfield’s commentary is a masterpiece of exegesis, covering the nuances of the Greek text of Romans with detailed syntactical comments. Cranfield excels in bringing the syntax to bear on theology. For example, in Romans 5:12, he gives six options for understanding the relative clause “in whom all sinned.” He shows why some ought to be dismissed on exegetical grounds, but others are dismissed for theological reasons (one is too Pelagian, for example!)

Douglas J. Moo, Romans (NICNT; Grand Rapids, Mich.: Eerdmans, 1996). Moo’s commentary on Romans is massive, just a bit over 1000 pages. Remarkably, the introduction is a mere 35 pages! Like many of the newer contributions to the NICNT series, this commentary on Romans engages the Greek text, making exegetical observations primarily in the footnotes. I find that too many of these notes are simply the Greek word. If they had been allowed in the main text, the notes would be far fewer. Moo has a handful of favorite dialogue partners, often playing one off of another; occasionally a footnote is simply the name of the scholar who suggests a certain reading. Moo includes systematic theology as a part of the discussion on a few occasions, especially in places where theology is affected by an exegetical point in the text (imputation of sin in Rom 5:12, for example).

J. D. G. Dunn, Romans (WBC; 2 vol.; Nashville: Word, 1988). One would think that Dunn’s commentary on Romans would be the flagship of the new perspective on Paul, and to a large extent it is just that. Dunn says in his introduction that he intentionally writes his commentary to read Paul in the context of first century Judaism, specifically as described by Sanders. His commitment to this is seen from the very first line of the introduction, “Paul was a Jew. He was born a Jew and brought up a Jew. He never ceased being a Jew.” In fact, the Jewish literature of the Second Temple Period appears more often in this commentary than any other surveyed here. In the exegetical section of the commentary Dunn deals with the details of the Greek text, but in his explanations he begins to create a Theology of Paul (his Pauline Theology is the fruit of his labor in the text of Romans).

Thomas R. Schreiner, Romans (BECNT; Grand Rapids, Mich.: Baker, 1998). Like most of the Baker Exegetical series, Schreiner’s commentary is aimed at the busy pastor and layman. He states in his preface that he intends the commentary to be “meaty,” but not so dense that reading distracts from Paul’s own words. With respect to “new perspective” issues, this commentary is decidedly traditional. Schreiner in fact dedicates the book to John Piper. But this does not mean that the commentary is a parroting of Calvin or Reformed theology. Schreiner carefully weighs the sometimes dense syntax in order to develop Paul’s thought. In the section on Romans 5:12 (“in whom all sinned”) he develops a number of views on the difficult phrase yet settles on a more or less reformed view of the text (original sin, imputation).

K. P. Donfried, The Romans Debate (Peabody, Mass.: Hendrickson, 1977, revised 1991). Including this book instead of another commentary might be a criminal misuse of my prerogative as the list-maker. My reason for including this non-commentary in a list of key commentaries is that the books listed above are noticeably light in introductory matters. Given the importance of the text of Romans, it is understandable that a commentary simply move through the text in order to tease out Paul’s meaning. But each book in this list comes from a perspective theologically and the writers make many assumptions about what Paul says before they approach the text. The Romans Debate collects important articles and book sections on the problems one faces trying to build a “theology of Paul.” There are some real classics in this collection, it is well worth the price of the book to have these essays gathered into one place.

Conclusion. Where’s Wright? I did not include Wright’s commentary on Romans since it is embedded in the New Interpreter’s Bible, and I have not read it! I think that Abingdon needs to publish the Romans commentary separately. My guess is that would sell much better than individual volumes of the larger NIB.

Worse – D. Martin Lloyd-Jones is not on the list.  I can already hear people complaining – so tell me, what commentaries have you found useful (and why)?  Who has been (criminally) omitted from this list?  What classic commentary on Romans should be read by everyone who wants to understand Paul’s thought?