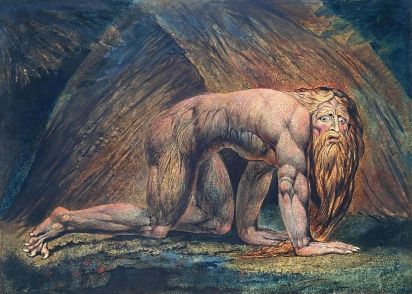 “…enough is known of Nebuchadnezzar’s forty-three-year reign so that it is impossible to fit in such a period of insanity.” Hartman and Di Lella, Daniel, 178.

There no record of a seven month or seven year hiatus in the reign of Nebuchadnezzar nor any indication the king was insane for any period of time. Some scholars suggest the writer of Daniel confused Nebuchadnezzar with Nabonidus, the last king of Babylon (556–539 B. C.) who spend about ten years outside of the city of Babylon. This period it Teima (Tyma, Tema) is sometimes described as a self-imposed exile. The Verse Account of Nabonidus (ANET 312-313) reports Nabonidus’s “protective deity became hostile to him” so he captured Tema and built a palace and temple.

The suggestion Daniel has confused his Babylonian kings may be supported by a text from the Dead Sea Scrolls, the Prayer of Nabonidus (4Q242). The text was published in 1956 and describes a seven year affliction and remarkable confession of faith in the God of Israel after a Jewish exorcist helps him overcome his “malignant inflammation.” Fragments 1-3 read as follows:

Words of the pr[ay]er which Nabonidus, king of [the] la[nd of Baby]lon, the [great] king, prayed [when he was afflicted]  2 by a malignant inflammation, by decree of the G[od Most Hi]gh, in Teiman. [I, Nabonidus,] was afflicted [by a malignant inflammation] 3 for seven years, and was banished far [from men, until I prayed to the God Most High] 4 and an exorcist forgave my sin. He was a Je[w] fr[om the exiles, who said to me:] 5 «Make a proclamation in writing, so that glory, exal[tation and hono]ur be given to the name of [the] G[od Most High». And I wrote as follows: «When] 6 I was afflicted by a ma[lignant] inflammation […] in Teiman, [by decree of the God Most High,] 7 [I] prayed for seven years [to all] the gods of silver and gold, [of bronze and iron,] 8 of wood, of stone and of clay, because [I thoug]ht that t[hey were] gods […] (Martı́nez and Tigchelaar, The Dead Sea Scrolls Study Edition (Leiden; New York: Brill, 1997–1998), 487)

There are some scholars who attempt to fill out this story with the text of Daniel 4, such as inserting the name Daniel into fragment 4. But as John Collins points out, there are real differences between this fragmentary story and Daniel 4. The king’s name is different, his affliction is different, the name of the Jewish exile is not given, etc. He concludes “It is not, of course, historically accurate. It is a Jewish story that narrates a fictitious conversion of a Babylonian king” (Daniel, Hermenia, 218).

Conservative commentaries often observe Nebuchadnezzar’s reign is well documented until his eleventh year. That year is practically silent and details of the following years are far less detailed than his early years. Stephen Langdon published fifty-two building inscriptions from Nebuchadnezzar, but only four come from the latter half of his reign. The latter period is “remarkably poor in its number of literary productions.” Langdon also notes the lack of religious references in the later inscriptions.  After 590 B.C. interests in inscriptions turn more to politics than religion.  Langdon states “we have scarcely anything but palace inscriptions with little to say about the religious interests of the king.”

However, Langdon’s book, Building Inscriptions of the Neo-Babylonian Empire was published in 1905 and until Google books, very difficult to find in a library. I originally read about Langdon in a 1994 article by Paul Ferguson, “Nebuchadnezzar, Gilgamesh, and the ‘Babylonian Job’” JETS 37 (1994): 321-33.

More recently, a few published fragment from Babylon describes Nebuchadnezzar as distracted, disoriented, and confused (A. K. Grayson, Babylonian Historical-Literary Texts, 87-89). The text ends with Nebuchadnezzar going to the “holy gate” and weeping bitterly before the gods. As exciting as this text is, it is too short and fragmented to argue that it does in fact prove Daniel 4.

Finally, the advice of Joyce Baldwin is worth noting here. It is highly unlikely that we will ever find a reference to the king’s madness in Babylonian records. This is simply not the sort of thing any king would record nor would his advisors likely bring it up after he regained his mind (Daniel, 108). Likewise Montgomery points out the royal family did not advertise their illnesses, “The alleged malady is not an impossibility” (Daniel ICC, 220-21).

I would suggest there were many stories circulating about illness or madness in the Babylonian royal family based on the fact there was madness in the royal family. These stories generated several different versions of the story, some featuring Nebuchadnezzar, some Nabonidus. There are numerous other traditions which are similar to Daniel 4 reported in Josephus and Eusebius as well as the Babylonian Ludlul Bel Nemeqi, (“I Will Praise the Lord of Wisdom,” ANET 596-600). In this remarkable story, the narrator says:

I spent the night in my dung like an ox, and wallowed in my excrement like a sheep. My symptoms are beyond the exorcist, and my omens have confused the diviner (ANET 598).

This resonates with Daniel 4 and the Prayer of Nabonidus. Stories about striking down an arrogant Babylonian royal with some kind of illness were not uncommon (and undoubtedly popular).

But why does a Judean exile repeat this story as we have it in the book of Daniel? What is the theological motivation for portraying Nebuchadnezzar as humbled by God? Regardless of the early or later date of Daniel, Nebuchadnezzar and his empire is long gone when the book reached its final form and began to circulate among post-exilic religious and academic communities. Someone living under Antiochus’s reign of terror would have found it comforting that God humbled the great king of Babylon.

If God did this to Nebuchadnezzar, how much more Antiochus, Nero, Vespasian, Domitian, Constantine, or any other world ruler who sought to destroy God’s people.