Isaiah 43:2 When you walk through the fire, you will not be burned; the flames will not set you ablaze.

Nebuchadnezzar is even angrier at three Judean exiles for defying him to his face and orders the furnace be made still hotter, seven times hotter (an idiom meaning “as hot as possible”). Nebuchadnezzar has the three Jews tied up and sends his soldiers to toss them into the top of the furnace so he can watch them die at a safe distance. The flames are so hot the men who threw them into the furnace die from the heat! 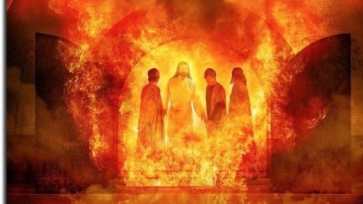 In the LXX and in Jewish tradition, the flames are stoked even hotter while they are in the furnace, trying to make it even hotter. Smoke rose 49 cubits, or 74 feet into the air. Another feature of the LXX at this point in the story is a lengthy prayer (66 verses) by Azariah. This prayer does not appear in any Aramaic texts and is not consider canonical by Protestants.

As Nebuchadnezzar watches, he is amazed to see not three, but four people in the flames. All four are walking around unharmed. This fourth person is described as like “a son of the gods” (ESV), translating the phrase לְבַר־אֱלָהִֽין. What is different about this fourth person is not stated, but Nebuchadnezzar believes he is seeing some kind of divine being in the flames.

Who is the mysterious fourth person in the fiery furnace?

Expounded R. Simeon the Shilonite, “When wicked Nebuchadnezzar threw Hananiah, Mishael, and Azariah into the fiery furnace, Yurqami, prince of hail, stood before the Holy One, blessed be He. He said to him, ‘Lord of the world, let me go down and cool it off and save those righteous men from the fiery furnace.’ Said to him Gabriel, ‘That is not how the power of the Holy One, blessed be He, is, for you are the prince of hail, and everybody knows that water puts out fire. Rather, I am the prince of fire. Let me go down and cool it off inside, [118B] but heat it from the outside, and so I will do a double miracle.’ Said to him the Holy One, blessed be He, ‘Go on down.’ At that moment Gabriel commenced with the sentence, ‘And the truth of the Lord endures forever.’ ” (Jacob Neusner, The Babylonian Talmud. 4:547–548)

In Christian tradition, this fourth person is the Angel of the Lord, מַלְאַ֨ךְ יְהֹוָ֥ה of Exodus 3:2. Many Christian commentators identify the fourth person as the Son of God, a “pre-incarnate Jesus Christ” (Miller, Daniel, 123-124).

However, Montgomery points out the Aramaic phrase “son of the gods” was a “perfectly pagan phrase” (106). Nebuchadnezzar claims to be seeing a divine figure of some kind, associating with one or more of the various gods in his own pantheon. From the perspective of the three men in the fire, this is an agent of God sent to protect them from harm.

When Nebuchadnezzar realizes what has happens, he calls them out, and calls them servants of the Most High God, again indicating that he realizes that the God of the Jews is indeed powerful. This whole sequence of events is even comical: Nebuchadnezzar boldly stated no god can save them, he made every effort to kill the three men, yet he is unable to harm them in any way because they are protected by the Most High God.

Similar to Nebuchadnezzar’s reaction in chapter 2, the king confesses the god of Shadrach, Meshach and Abednego is powerful and issued an edict to protect their right to worship their own God and not to worship his gods. Did Nebuchadnezzar “convert”? Not at all, his confession still falls short of faith in the God of the Judean exiles alone. He certainly falls short of confessing his own gods do not exist.

While toleration of the Jews would have been particularly applicable during the persecution of the Jews under Antichious, there is hardly a period in Jewish history since the dispersion began when they have been entirely free from persecution. As Daniel 3:17 says, God can save us but even if he does not, the Jewish people enduring oppression from Antiochus would not compromise their traditions even if this refusal led to their death.