Ephesians is one of the books in the Pauline collection which is frequently assumed to be pseudonymous.  Despite the fact that Paul refers to himself four times in the letter (1:1, 3:1, 4:1, and 6:19-22), the majority of scholarship in the last 150 years denies the authenticity of the letter. Rather than written by the “historical Paul,” the letter was created in the late first century, perhaps as a companion to the book of Acts. 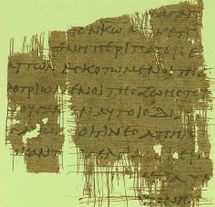 While there are many variations on this argument, many introductions to Paul reject the letter as authentic on the basis of vocabulary, style, and theology.  For many, the letter does not sound enough like Romans, Galatians, or 1-2 Corinthians to be accepted as authentic.  Usually the letter of Ephesians is thought to be a post-Pauline compendium of Paul’s theology.  It was written by a disciple of Paul (“Paul’s best disciple,” Brown, 620).  Sometimes the reconstruction of the circumstances are quite complex. For example, Goodspeed suggested that Onesimus returned to Philemon, was released from his slavery and eventually became the bishop of Ephesus. After Acts was published, there was a great deal of interest in Paul, so Onesimus gathered all the various letters Paul sent to the churches of Ephesus as an introduction to Paul’s theology.  As Brown says, this is interesting but “totally a guess.”

There are some differences between Ephesians and the other Pauline letters.  For example, the common Pauline term brethren is missing (except 6:23), and the letter never calls the Jewish people “Jews” in the epistle, even though the Jews are an important part of his argument.  More surprising is the fact that the verb “to justify” is not used, even though while it is common in Galatians and Romans and might have been useful in the argument of 2:11-22.

Does it matter if Paul did not write the letter himself?  If the letter contains the actual “voice of Paul” then the letter can be considered Pauline.  By way of analogy, in the study of the Gospels there is a great deal of discussion over the words of Jesus.  When I read the words of Jesus in my ESV Bible, can I know that these are the real words of the historical Jesus?  The answer which satisfies me is that the words of Jesus in the Synoptic Gospels are true “voice of Jesus,” even though they are not the actual words Jesus’ words were originally spoken in Aramaic, translated to Greek and then to English for me to read!

In the same way, even if Ephesians was not written by Paul, the true “voice of Paul” can be found in the letter.  As it happens I think Paul did write Ephesians, albeit much later in his life during his Roman house arrest.  The letter was intended to go to all the house churches in Ephesus and there is no burning problem which Paul has to address (as in Galatians or Corinthians).  This explains why the letter is generic in terms of theology and practice.

Considering Ephesians to be an authentic Pauline letter may change the way we envision Paul’s  theology.  While Romans and Galatians are concerning with justification and the struggle to define the Church as something different than Judaism, Ephesians is a witness to the universal church which includes Jews and Gentiles in “one body.”  Unity of the church seems to be Paul’s main theme in the letter.  Rather than drawing lines, Paul is arguing for unity among those who are “in Christ.”

How might taking Ephesians seriously change the way we think about various elements of Pauline Theology?

19 thoughts on “Why Not Ephesians?”