In order to reach the goal to which he has been called, Paul does not look back at any of his achievements but keeps his attention fixed on the goal God has placed before him. Forgetting what lies behind. To “forget” (ἐπιλανθάνομαι) is fairly clear, although this word can mean “do not think about it” or “do not concern yourself with it.” When someone thanks you for a simple favor, the response is often “forget about it.” What we mean is, “don’t be concerned about it, whatever I did is not that big of a deal.”

Paul may refer to his persecution of the followers of Jesus after the resurrection, since he likely had a great deal of guilt and remorse for his attacks on the earliest church. This is very preachable since most people have some guilt over the things they have done in the past. Pastors can use this as an opportunity to encourage people to forgive themselves as Christ forgave them and not dwell on the past.

In the context of Philippians, however, he may refer here to his heritage as a well-trained and highly respected Jewish leader, someone who could claim to be “blameless” with respect to righteousness according to the Law. He has just described his “boast” (vv 4-6) even though he now considers it a loss compared to what he has in Christ.

But there is another factor in “forgetting what lies behind.” Paul was called to be the “light to the Gentiles” by the risen Lord Jesus himself.  Jesus gave to Paul a unique commission and revelation and has directly guided him on a number of occasions. He has already planted many churches and is responsible for spreading the Gospel throughout Roman Empire, he has already written letters which will eventually become a major component of the canon of the New Testament. Paul could review his life in Christ and conclude he has made a spectacular contribution and served God better than anyone else in the first century. These “good things” have to be set aside as well, “forgetting what is behind” must include everything including these things that might be counted as bearing much fruit for God. 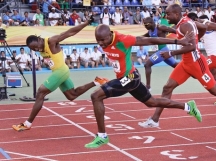 Second, Paul is “straining forward” to what lies ahead. This word (ἐπεκτείνομαι) only appears here in the New Testament, although it is the compound form of the more common word (τείνω) for stretching something or pulling tight on something (like reins, a helmet strap, both from Homer).  Since this is a compound form, the meaning is probably intensified, stretching for something that is just out of your reach, so far that you pull a muscle in your shoulder.

There might be a hint of an athletic metaphor here, since a runner “strains forward” to cross the finish line first, often making a final push to win the race. In 2012  U.S. Olympic trials, Allyson Felix and Jenebah Tarmoh “both crossed the finish line in 11.068 seconds.” Neither of the cameras shooting 3,000 frames per second clearly showed a winner. If either runner had been distracted just a little, or looked to the side a fraction of a second would be lost and the other runner would have clearly won the race.

This is the kind of focus Paul is talking about in Philippians. If one is straining for what is ahead of them, their focus is not on what is behind them, or even what is around them at the moment. They are completely focused on the goal, crossing the finish line and winning the prize. A runner cannot think about who is behind them or running alongside them, they can only focus on the future goal of finishing the race and winning the prize. For Paul, this means the terrible things he had done as well as his admirable service for the cause of Christ. This also means he cannot focus on his opponents who are also running the race (even if they are not completing as properly as Paul is).

It is important understand what Paul is saying here. He forgets whatever is in his past, both good and bad, so that he can run the race set out for him unhindered. This means the one who is in Christ must set aside both negative baggage as well as positive achievements. Paul does this as best he can, considering his former life as an advancing young Pharisee to be rubbish, but also all of his achievements since meeting Christ on the road to Damascus. He has planted churches and developed leaders who will carry his ministry on well after his death. One could argue without Paul, the church would have never spread out into the western Roman Empire as it did. Yet that huge accomplishment is also rubbish to Paul!