In 2 Cor 11 Paul catalogs his suffering in this paragraph. Since this book was written while Paul was in Ephesus (Acts 19), we know he will face even greater suffering than this (two separate two-year house arrests and a shipwreck between!)

He says he has worked harder, been in prison more, been beaten countlessly and has been near death many times. Paul uses a series of adverbs (περισσοτέρως twice, ὑπερβαλλόντως once, and πολλάκις once) to overemphasize his difficult life as a servant of Christ. These were not one-time problems he endured for a short time. This is the constant state of his life since he began his ministry!

“Five time lashed 40 less one” is a reference to Jewish punishment. The Greek says, “I received the forty less one,” which is a clear reference to a lashing. Josephus uses the phrase twice in describing the Mosaic Law (Ant. 4:238. 248). This punishment came from the Jews—it was an attempt from synagogues to bring Paul back in line with his heritage. The maximum punishment in the law was 40 lashes (Deut 25:3). 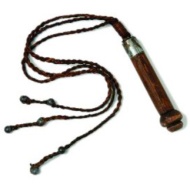 Since the Law says more than 40 lashes is degrading to the one giving the punishment, the tradition developed by the first century to stop short of 40 (m.Makkot 3:10 simply recommends a number near forty but less than forty; 3:11 gives some instruction for beating people who are physically unable to take a full flogging). If the punisher “added even a single stripe and the victim died, lo, this one goes into exile on his account” (m.Makkoth 3:14c). In the Mishnah there is a list of offences which could result in a flogging (m.Makkoth 3:1-9). While some of these are moral offences, there are quite a few violations of the Law which can result in a flogging (Including “He who makes a baldness on his head” and tattooing one’s body (m.Makkoth 3:5-6)!

What is significant is Paul received this penalty five times!  Early in his ministry Paul may have been expelled from the synagogue for teaching that Jesus was the Messiah, and certainly if he taught God-fearing Gentiles they could be fully save without keeping the Law. This indicates he still was trying to reach out to the Jews in the synagogues early in his career, as Acts indicates he never really stopped going to the synagogues to reach the “Jew first.”

“Three times beaten with rods” is a reference to Roman punishment. The Greek (ῥαβδίζω) refers only to beating someone with rods, the Latin term fustigatio was distinct from catigatio, lashing, and verberatio, flogging with chains (BDAG). Paul received this treatment in Acts 16:22 for creating a “public disturbance” even though he was a Roman citizen.

“Once stoned and left for dead” refers to Lystra (Acts 14:19). Stoning was a typical way for a Jewish group to execute someone. In Acts 7 Paul himself participates in the stoning of Stephen and he is about to be stoned in Acts 21:30 when he is falsely accused of bringing a Gentile into the Temple courts.

His “frequent journeys” put him in danger typical of travel in the ancient world.  As Barrett says, “Paul does not exaggerate the perils of his day” (298). Despite Pax Romana and the Roman roads connecting major cities, it was extremely dangerous for anyone to travel in a small group.

“Danger from false brothers” refers to people claiming to be Christians who are looking to accuse Paul. This attack comes from inside the family, from people claiming to be Christians who attack Paul’s theology and missionary methods. Perhaps he has in mind here the troubles he has had with people in Galatia and personal attacks leading up to the Jerusalem conference in Acts 15. It is also possible he has in mind the opponents in Corinth who are attacking him without cause.

Perhaps the most suffering Paul faced is from his own churches (v. 28). He has a great deal of anxiety for the churches he founded, trained, and then left to themselves. He describes this as “daily pressure” (ἐπίστασις) and “worry” (μέριμνα). This concern comes from Paul’s deeply felt personal responsibility for his congregations. He is in constant contact with them and is well aware of the pressure they face from the same sources persecuting Paul.

Paul chooses to boast is in his only weakness (v. 29-30). Paul now returns to the problem which began this long section of foolish boasting. The Corinthian Church seems to have require Paul to put his achievements up against his opponents so they might choose who would bring them the most honor if they were to give them patronage. As C. K. Barrett says “Paul has finally worked off his fit of folly and has returned to his normal sound mind” (302); he will not engage in the typical Roman pursuit of honor with his opponents!