When Paul speaks to the crowd in Acts 22, he goes out of his way to show that he is a faithful Jew. In this speech he tries to demonstrate his commitment to the faith of his ancestors by calling to mind a series of witnesses who can attest to his zeal within Judaism. 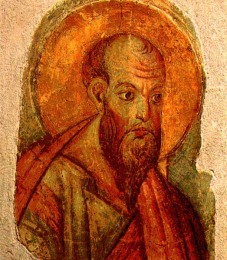 He begins by citing his personal credentials. Notice first that Paul switches to Aramaic.  The people are hostile to him, and consider him a traitor.  By speaking in Aramaic he demonstrates that he is no Hellenistic Jew who does not know the language of the Hebrew Bible.  In fact, it is possible that the Greek says he spoke in Hebrew, but that is less likely since the crowds may not have understood him at that point.

Paul’s education is impeccable – he was a student of Gamaliel.  We met Gamaliel in chapter 5 as the rational voice among the Sanhedrin.  He was the pupil of Hillel, one of the greatest of the Rabbis.  His decisions and opinions are constantly cited in the Mishnah.  Paul does not claim to be a Pharisee here (cf., 23:6), but by claiming to be a student of Gamaliel he is associating himself with one of the most respected teachers in Jerusalem.

At one time, Paul was as zealous for the Law as the crowd is at this moment.  As we have seen many times in Acts, this zeal took the form of violent action against those who claimed that Jesus was the Messiah. Paul calls upon additional witnesses here, since his authority to arrest followers of Jesus came from the High Priest and “council of elders.”  They can attest to his zeal for the Law.  Like Phineas or Judas Maccabees, Paul was willing to use force to compel fellow Jews to keep the Law completely, if it was necessary.   Paul briefly describes his intention to go to Damascus to arrest followers of the Way, another fact that might be confirmed by the High Priest.

Ananias is described as a devout Jew, someone who keeps the Law, and respected by all the Jews living in Damascus.  Luke used the same Greek rod for devout to describe Simeon in the Temple (Luke 2:25) as well as the devout men in the temple who in the Temple at Pentecost (Acts 2:5) and the devout men who buried Stephen.

The speech of Ananias is slightly different from chapter 9.   The way he describes God and Jesus are very Jewish – the “God of Our Fathers” and “Righteous One” are typical phrases used for the God of the Hebrew Bible. In fact, that Jesus is the Righteous One is found in Luke-Acts only in Jewish contexts (Luke 23:47, Acts 3:14, 7:32,13:23).  Ananias does not say here that Paul is called to go to the Gentiles.  Why?  This is probably because Paul wants to emphasize his divine calling, and waits to share this calling until the Lord calls him from the Temple.

Ananias tells Paul to be baptized, but this is an unusual way to express the command in Greek.  Luke uses an aorist middle (quite distinct from the aorist passive), the nuance of meaning ought to be “go baptize yourself.”) This may imply that Paul was to baptize himself in a mikveh, as we have observed several times in Acts. This unusual expression ought to be translated as middle and taken as yet another indication that Paul claims to be a “proper Jew” who is not at all guilty of desecrating the Temple.

What can we make of this claim orthodoxy from Paul?  How can the apostle to the Gentile stand before a Jewish crowd and claim to be an outstanding example of Law-Keeping?  We will continue to deal with this problem as Paul’s defense continues before the Sanhedrin.