In Acts 23:1 Paul claims to have “lived his life in good conscience up to this day.”  In the context of a hearing before the Sanhedrin, it is possible to read this as a statement that he has been faithful to the Jewish Law.   This is very similar to what Paul says in Acts 24:16 when he describes his entry into the Temple as  “I always take pains to have a clear conscience toward both God and man.”  He even points out that he was giving alms to the poor (the collection) and participating in a purification ritual when he was unjustly attacked. 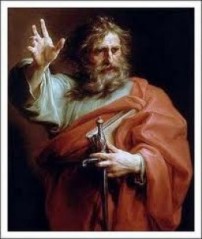 In fact, Paul was in the temple “purifying himself” (ἁγνίζω, Acts 21:24, 24:18).  The verb is not normally associated with the Nazarite vow (which took thirty days, not the seven mentioned in Acts 21).  The verb is used in John 11:55 for Jews purifying themselves prior to the Passover (cf., Josesphus, JW 6, 425, Ant. 12, 145). Pilgrims arriving in Jerusalem from Gentile territory purified themselves in the Temple In Num 19:12 the verb is used to purify oneself after touching a corpse.  That Paul was willing to undergo this level of purity ritual at this point in his career indicates that he is still willing to “be a Jew among the Jews” (1 Cor 9:20).

Paul goes a bit further and claims to be a Pharisee.  After his exchange with the High Priest in Acts 23:2-5, Paul shifts the focus to the controversy between Pharisees and Sadducees (23:6-10). This maneuver has caused some commentators to criticize Paul. It is not an honest argument by Paul, he instigates a near riot between the two factions of the Sanhedrin. The Pharisees were a minority in the Sanhedrin, but a popular and vocal minority. They believed in the resurrection of the dead as well as angels and spirits.

Is this true? Can Paul be considered a “practicing Pharisee” at this point in his ministry?  For some interpreters, this is not at all the historical Paul who wrote Galatians.  At the very least, he has broken purity traditions by eating with Gentiles. Yet with regard to the issue of the resurrection, he was a Pharisee.  Paul is simply stating that he agrees on this major point, and for the Pharisees, at this moment, it is enough for them to defend Paul.

By making this statement, Paul gains the favor of the Pharisees while enraging the Sadducees. The argument that ensues was so fierce that the Roman official thought that Paul would be “torn to pieces,” so he takes him back to the barracks, leaving the Jews to their “theological dispute.”

While it was a crafty way of deflecting attention away from himself, it is possible that Paul was serious – with respect to the Law Paul has a clear conscience. James Dunn offers the suggestion that Paul’s statement was less for the Sanhedrin (which had probably already judged him as guilty), but for the Roman tribune and soldiers.  The word conscience (συνείδησις)  is a concept that does not really appear in Hebrew (Dunn, Beginning at Jerusalem, 974, n. 73, the word is only found in the LXX in Eccl. 10:29 and Wisdom 17:10).  If he spoke Greek and used this particular expression, it is possible that he was claiming to the Romans that he was not guilty of any crime.

What do we do with this incident?  Is Paul playing both sides in order to gain converts?  Did he really “keep the Law” while telling Gentiles to “not keep the Law”?  I can think of a number of issues I might hold loosely so that I can reach both sides.  Perhaps there is an application to Christian involvement in politics or some social issues.