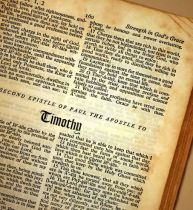 Paul was “appointed a preacher and apostle and teacher” of the Gospel (1:11). This description of Paul’s ministry is similar to 1 Tim 2:7. The “preacher” in the ESV is better a “herald,” or “proclaimer.” This is a person who is appointed to deliver a particular message, in Paul’s case, from God. The language is a little different in 1 Tim 1:18, 6:20 and 2 Tim 2:2. In these later books, Timothy is encouraged to guard or protect the deposit given to him. Like the old “town crier,” Timothy is to take this deposit of tradition and accurately proclaim it to his community.

Paul mentions things passed down to him in his other letters. Two traditional elements were handed down to him from the apostles: 1 Cor 11:2 (the Lord’s table) and 1 Cor 15:1 (witnesses to the resurrection). In 2 Thess 2:15 Paul encourages the congregation to “stand firm” in the traditions which Paul delivered to them. Even in his earliest letter, Paul considers his gospel a tradition which cannot be modified (Gal 1:14).  It is likely that Paul alludes to the words of Jesus in 1 Thess 5, words that are eventually collected in Matthew’s Olivet Discourse.

Paul is clear, however, that much of what he preached he received directly from Jesus through a special revelation. For some doctrines, this is a direct revelation that could not be deduced from the Hebrew Bible. For example, in 1 Thess 4:13-18 Paul says that the Lord himself gave him the revelation of the rapture. That Jews and Gentiles are saved into a single body without requiring the Gentiles to keep the Law is a “mystery” which was not revealed in the Hebrew Bible. In Galatians 1:11-12 Paul claims that the Gospel he preaches is “not of human origin” but rather “received by revelation.”

For some of Paul’s teaching, he may have been led by the Holy Spirit to interpret biblical texts differently, or to combine texts from the Hebrew Bible in unique ways which supported the idea that Jesus is the Messiah or that salvation is apart from works. Romans 4 indicates that the story of Abraham could be interpreted in a way that supported Paul’s gospel – this is exegesis guided by the Spirit of God. Much of the argument of Galatians is based on applications from stories in Genesis. Paul was trained as a scholar and interpreted Scripture in his sermons and letters in a way consistent with other Jewish teachers of his day.  This “interpretation of scripture” is part of the tradition Timothy is to guard and pass along.

In some cases the tradition is handed down from the apostles through Paul, to Timothy and then to the qualified elders in Ephesus. In other cases Paul is the source. But in either case Paul commands Timothy to guard this tradition carefully and to pass it to the next generation of believers.