Commentaries on Philemon are often added to the end of a Colossians commentary as if this short letter is an appendix to Colossians (or, in the case of Jac Müller’s 1955 NICNT commentary, an add-on to Philippians). Perhaps editors consider the letter too short to merit a full sized commentary, unless it is heavily supplemented with additional material on slavery in the Roman world (as in the 588 page Barth and Blanke Eerdmans Critical Commentary, 2000). Although Scot McKnight’s commentary on Philemon in the NICNT series was originally intended to be included with this forthcoming Colossians commentary, Eerdmans decided to publish Philemon separately. 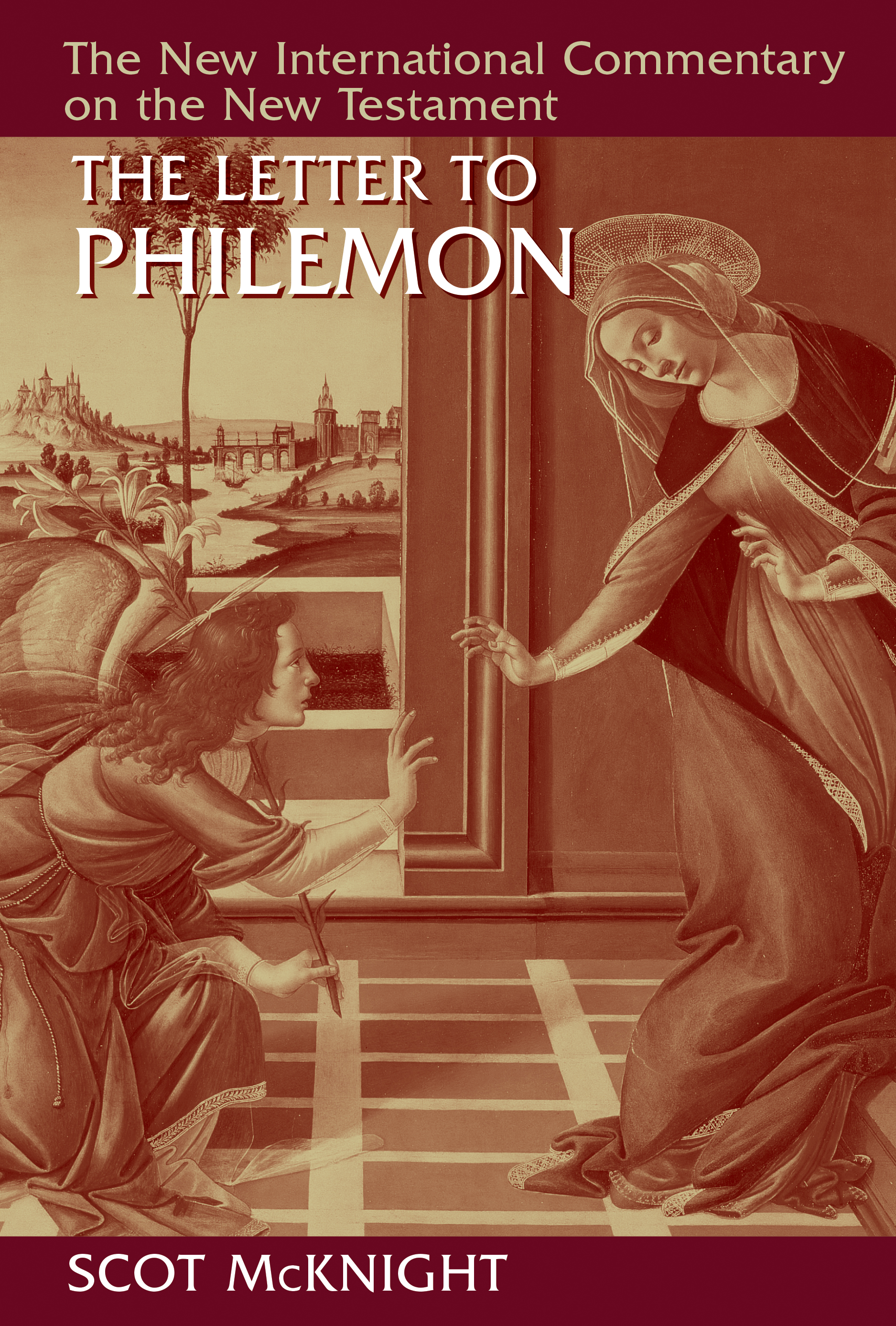 As McKnight recognizes, commentaries on Philemon must deal with the problem of slavery in the letter. In Philemon, Paul “envisions a new kind of relationship on the basis of siblingship,” even if that new relationship is between a slave and master (2). For many modern commentators this is a problem since slavery is a horrific abuse of human rights and a serious problem throughout the world today. Rather than tell Philemon to release his slave Philemon from his bondage, Paul does not seem to notice a problem with slavery in this short letter. Taken along with Colossians, Paul tells slaves to obey their masters rather than commanding masters to set their slaves free. In 1 Corinthians 7:21-24 Paul tells people who were slaves when called by Christ to “not let it trouble them” and to gain their freedom if possible. McKnight points out this is as close to modern abolitionism that Paul gets, “but abolitionism it is not” (29).

Because Paul does not appeal to Onesimus to set Philemon free, he seems to approve of slavery. One approach to the problem is to fully describe slavery in the Roman world then draw contrasts to various modern practices of slavery in order to claim Roman slavery was often not harsh. Onesimus is imagined to be an educated majordomo for a wealthy Philemon, appealing to Paul to adjudicate some dispute with his master. This strategy attempts to reduce Paul’s offensive lack of interest in ending the dehumanizing practice of slavery.

McKnight provides a twenty-two page description of slavery in the Roman world, summarizing a wide range of recent scholarship on Roman slavery. He carefully defines slavery and describes Rome’s pervasive “slave culture.” This includes brief sections on the family loie of a slave, the slave’s relationship with the master, and options for obtaining justice for the slave, including manumission and the possibility of becoming a runaway. Each of this subsections are illustrated with some Greco-Roman source and each example could be multiplied. McKnight offers illustrations and ample references to more detailed works of Roman slavery, thus keeping this commentary on Philemon from becoming too bloated with background material.

After surveying the possibility of slavery as providing a way for a person to move up the Roman social ranks, McKnight comments “we must come down from these utopian mountains to the reality” (26). The western ideal of freedom was unknown to the vast majority or Romans. Only those at the very top of Roman society would have something like the freedom western (especially American) people enjoy. We are, as McKnight says, “driven by culture to evaluate Paul’s moral message on the basis of later abolition of slavery and freedom of slaves” (26). In order to properly interpret a text like Philemon, we must enter the word of the Roman first century and read Philemon in that context.

This is material valuable, but McKnight does not simply lay out background then proceed to the commentary. He includes a six-page essay entitled “Philemon in the Crucible of New World Slavery and Slavery Today” (30-36). Here he deals with the serious problem of slavery in the twenty-first century. A reader of Philemon may feel smugly satisfied modern Christianity has “gone beyond Paul” by ending slavery in England and America, but the conditions of slavery persists throughout the world with estimates as high as thirty-five million people living in slavery. This includes sex trafficking as well as labor exploitation (either agricultural or domestic). McKnight mentions three brief examples, Thai fishing ships, child sex slaves and forced marriages. “Modern slavery” McKnight says, “is different from the past in its deception, its technological sophistication, and is disregard for ethnicity and race” (36). Paul’s answer to this heinous problem would be the same as his answer to Philemon: the church is to be a place where reconciliation happens and justice in the church ought to become justice for all.

The body of the commentary is only about sixty-five pages, about half of the volume. McKnight proceeds as do other contributions to the NICNT. After providing a translation of the text and a brief introduction, McKnight works through the text phrase-by-phrase, with any comments on the Greek in transliteration (although Greek appears untransliterated in the footnotes). Since Philemon is less complicated grammatically than other Pauline letters, the notes only occasionally need to deal with lexical and syntactical issues. More often McKnight comments on the rhetoric of the letter, focusing on how Paul makes his appeal to Philemon.

Conclusion. This new contribution on Philemon ought to take its place alongside other major exegetical commentaries (Barth and Blanke, Johnson, Knox). This small commentary will assist pastors and teachers to prepare sermons and studies on this small but important letter of Paul which are sensitive to the original cultural context but also squarely aimed at contemporary issues. McKnight has already contributed an excellent commentary on James to the NICNT series and his Colossians volume is scheduled for release in February 2018 to replace the venerable NICNT commentary by F. F. Bruce on Colossians, Philemon, and Ephesians (1984). In anticipation of this new commentary, McKnight posted “Ten Reasons the Church Needs Philemon” to his Jesus Creed blog. EerdWorld has a short video interviewing McKnight on this commentary and his forthcoming NICNT commentary on Colossians.