Paul addressed the book we call Romans to Christians living in Rome. At the time the letter was written, he had not yet visited the city as far as we know and he does not personally know Christians in Rome. Although he may have something about the church through Aquila and Priscilla (Acts 18:1-4), there is nothing to suggest he ministered there until he arrives about A.D. 60 (Acts 28:11-31). How did Christianity come to Rome?

The traditional view is the Roman church was founded by both Peter and Paul is rarely accept today. According to Eusebius, Peter followed the ach-heretic Simon the Sorcerer (Acts 8) to Rome in the second year of Claudius (A.D. 42). According to Eusebius, the Gospel Peter preached at this time was so well received the Roman people demanded a written copy, which became the Gospel of Mark, a tradition also found in Irenaeus.

Eusebuis, Hist. eccl. 2.15.1 And so greatly did the splendor of piety illumine the minds of Peter’s hearers that they were not satisfied with hearing once only, and were not content with the unwritten teaching of the divine Gospel, but with all sorts of entreaties they besought Mark, a follower of Peter, and the one whose Gospel is extant, that he would leave them a written monument of the doctrine which had been orally communicated to them.

Irenaeus, Haer. 3.1 Matthew also issued a written Gospel among the Hebrews in their own dialect, while Peter and Paul were preaching at Rome, and laying the foundations of the Church.

Setting this tradition aside, the modern consensus view is that the church was founded by believers who returned to Rome after Pentecost. Jews had contact with Rome as early as 160 B.C. According to 1 Macc 8:17-22, the Judas Maccabees sent an embassy to Rome in order to secure “establish friendship and alliance.” Pompey brought Jews captured at Jerusalem to Rome in 63 B.C. (Anitq. 14.4.5) and by the time Romans was written the Jewish population in Rome may have been as high as 50,000 (Fitzmyer, Romans, 27).  Craig Keener says estimates vary “from perhaps a quarter of a million (extrapolated from water supplies) to over a million for its metropolitan area (extrapolated, in my opinion more reliably, from concrete census figures from ancient historians” (Keener, Romans, 9). Fitzmyer also argues for at least thirteen synagogues based on inscriptional evidence (Fitzmyer, Romans, 28). In addition to these inscriptions there are thousands of funerary inscriptions in the catacombs.

Jewish Christianity would have come to Rome soon after Pentecost as Jews visiting Jerusalem in A. D. 30 or 33 returned home (depending on the date of the crucifixtion). Acts 2:10 lists Jews from the city of Rome as present in the crowd at Pentecost and Acts 6:9 mentions the Synagogue of the Freedmen. Although visitors to that synagogue could have come from anywhere, Fitzmyer suggests the members may have been descended from the Jews taken captive by Pompey (Fitzmyer, Romans, 29).

Raymond Brown points out that Christian missionaries coming from Jerusalem were more conservative with respect the Law and the connection of Christianity and Judaism in contrast to Christian missionaries from Antioch, such as Paul (Acts and Galatians support his point; see his Introduction, 562). He observes Paul is far more diplomatic with respect to the Law in Romans, as compared to Galatians. This may indicate the majority of his readers were Jews and more conservative with respect to the role of the Law for the Christian.

There is evidence of Christians in Rome as early as A.D. 49, when Claudius expelled Jews for rioting over “Chrestus,” likely a Latinized form of Christos, the Greek translation of Messiah. Luke refers to this decree in Acts 18:2-4. Soon after arriving in Corinth, Paul meets Aquila and Priscilla, Jewish tentmakers forced to leave Rome by Claudius. It is possible this expulsion of believers in A.D. 49 only effected the Jewish members of the congregation. If this is the case, then the congregation might have been founded by Jews, but is now primarily Gentile God-Fearers. If the church continued to grow, the percentage of Gentiles would have grown in this period.

After the death of Claudius the edit was canceled and Jewish believers could return to Rome, perhaps to discover the Christian congregations were far more Gentile than when they left. The Roman churches to which Paul wrote were therefore a mixture of Jewish and Gentile believers. The churches were not founded by Paul 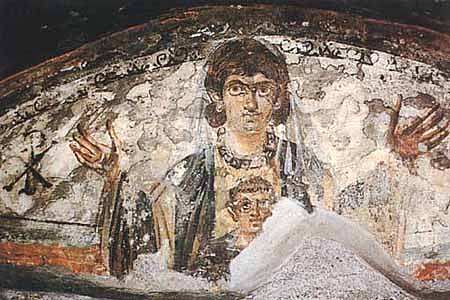 This consensus view has been challenged because parts of the book seem addressed only to Jews, other sections to Gentiles. There are details in the book that seem to be addressed to Jewish readers, especially in Romans 1-4. On the other hand, there are indications that Gentiles are being addressed in the church. In 11:13, Paul addresses “you Gentiles.”

It is best, therefore, to understand the church as both Jew and Gentile. Paul deals with the shift in God’s program from the Jew to all the world in Romans 9-11, and with some of the difficulties that Jewish-Christian congregations face in chapter 14. In fact, this may be the occasion for the letter.

7 thoughts on “How Did Christianity Come to Rome?”