After seven days of fasting, Ezra is still troubled in his spirit and once again brings a complaint before the Lord. He reviews creation (6:38-54) before asking his real question – if Israel really is God’s favorite people out of all those descended from Adam, how is it that the other nations domineer and devour her (6:55-59)? 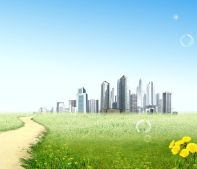 Uriel once again comes to Ezra and gives him another parable (7:1-25). This time a city is in the middle of a plain, but the entrance to the city is very narrow so that only one man may walk along the path and dangers are on either side. If a man is given the city as an inheritance, how can the man take possession of it without passing through the dangers? The angel makes the analogy clear. Israel is in sin because of Adam and therefore all her entrances are narrow and filled with danger. Israel is coming into her inheritance shortly, but to get into that city they must pass through the “narrow gate” fraught with dangers.

Uriel does not pause for another question from Ezra this time but rather moves right into the “signs” section of the vision (7:26-44). A time will come when a city appears and Israel will be delivered from the dangers of this world. “My son the Messiah” will appear and people will rejoice with him for 400 years (v. 28). Translations of this verse shows considerable variation in this title (OTP 1:537, note e). The Armenian has “the Messiah of God,” Georgian has “the elect my Messiah,” while the Latin has “my son Jesus.”

After that time he will die (v. 29) and the world will return to primeval silence. After seven days the world will be roused and all corruptible will perish. The dead will be raised to life and the Most High will be seated on the seat of judgment in order to pass judgment. The unrighteous will go down into the “furnace of hell” while the righteous into the “paradise of delight.”

This part of the vision is remarkable for a number of reasons. First, there is an indication of a temporary kingdom after the coming of the Messiah. This is not quite like Rev. 20 and the thousand-year kingdom (in 4 Ezra this kingdom only lasts four hundred years), but at least there is an expectation here of a gap between the coming of Messiah and the eternal state during which time the messiah will rule in peace on earth. Secondly, the term Messiah is used for the coming deliverer. This single Messiah will reveal himself and rescue the people from the dangers of the present age. Third, the major difference is that the Messiah dies at the end of the temporary kingdom. This expectation does not seem to be found in the New Testament at all. The description of the judgment at the end of the temporary kingdom sounds much more like the judgment in Mt. 25:31-46, although Revelation has a “complete” judgment at the end of the thousand years as well (Rev. 20:11-15, the “lake of fire” sounds much like the “furnace of hell” here in 4 Ezra).

Ezra praised God because of this revelation, but expresses some fear that there will not be many who are judged worthy at this final judgment (7:45-61). Uriel agrees, just as precious stones are precious because they are rare, so too the righteous is precious because they are so few. In 7:54-57 there is a superficial parallel to 1 Cor 3:10-14 in that a man builds on his foundation either precious things or worthless things. In 4 Ezra the earth is said to produce wither precious or worthless things as well. The point of these two passages are quite different, as are the catalog of worthless things. Ezra once again laments on behalf of the human race since so many of them are born into a world to be tormented then judged unworthy (7:62-74).

Uriel responds the state of humanity is Adam’s fault, the judgment is fair and just (contra 1 Enoch 31). Ezra then asks the angel about the place of the dead and the sorts of things which await the unrighteous dead (7:75-101). Uriel will describe this to him, but first he admonishes him to not be associated with those who are tormented. Ezra is told he has a “treasure of works laid up with the Most High” which will not be shown until the final judgment. This “storehouse of works” and the later questions about praying for those in torment are obvious hooks to later Catholic theology. It is odd, therefore, that these sections do not appear in the Latin version of 4 Ezra. Verses 36-105 are missing. Uriel gives the seven ways the unrighteous put themselves in torment (verses 81-87) and the seven ways the righteous can enter into paradise (88-99). Essentially those who serve the Lord in this life are rewarded, if not, they are tormented. 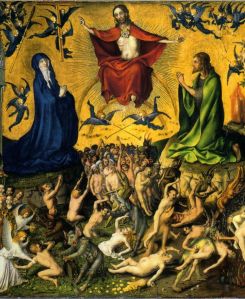 After seeing these things Ezra asks if the righteous will be allowed to intercede on behalf of the tormented (7:102-105). The Day of Judgment, Ezra is told, is decisive. No one will pray for another after the Day of Judgment and everyone will bear their own righteousness or unrighteousness. Ezra wonders about this, since Abraham was allowed to intercede on behalf of Sodom (7:106-111; The Latin text resumes at verse 36, after the strong negative answer on prayers for the dead in verse 105). He mentions the prayers of Moses, Joshua, Samuel, David, Solomon, Elijah and Hezekiah, all of whom prayed to the Lord on behalf of others and were heard. Uriel’s answer involves the difference between this age and the age to come. This age is weak, therefore the strong can pray for the weak with some effect. The coming age, however, is an age of glory and perfect righteousness (7:112-115). No one will be able to have mercy on the one who is judged in the coming age. Ezra once again laments over the seeming futility of mankind’s existence, but Uriel explains that the world is fair (7:116-131). Uriel quotes Moses – choose life that you may live!

Ezra then implores the Lord on the basis of his attributes (7:132-8:3). He lists seven divine attributes such as mercy, gracious, bountifulness, etc.  If God is this good, how can he judge people so harshly? Uriel’s response is to repeat the parable of the earth. From the earth come many clay pots which are nothing but dust, but only a few pieces of gold. “Many have been created, but few will be saved” (verse 3, a similar line to Mt. 22:14, “many are called but few are chosen” but with a completely different application).

Ezra tries to implore the Lord on the basis of creation once again (8:4-36). The point of this long prayer is that God’s creation is good and well-ordered. Why then would God, who is good and righteous, destroy those who have taught his law the same way he destroys other “beasts?” This question comes back to the problem of the destruction of Jerusalem. Ezra is told that it is true that God does not care so much for the unrighteous as he rejoices in the righteous (8:37-40). Ultimately, whatever a farmer sows will grow and give fruit (8:41). Ezra tries to shift the blame back to God: if the crop does not come in, it is because the rains did not come. He therefore begs God to spare the people and have mercy on creation (8:42-45). The Lord responds to this accusation that while Ezra is righteous, he does not love creation more than God. Ultimately everything will be judged fairly; evil will be done away with and the righteous will enter into paradise (8:46-62). Judgment is in fact drawing near, a fact which is only revealed to a few.

As in the earlier visions, last part of this vision is a description of the signs which will precede the end of the age (8:63-9:13). As before, there will be earthquakes and political chaos, showing that everything the Lord has declared from the beginning will be shown to be true. The fate of the wicked is described one more time in 9:14-25. Ezra compares the wicked to the righteous as a wave is to a drop of water. The Lord compares this to wheat on the threshing floor, more is burned than is used for food. “Let the multitude perish which has been born in vain, but let my grape and my plant be saved, because with much labor I have perfected them” (verse 22). Ezra is sent into a field to contemplate this answer and the Lord gives him a series of dreams.