This book is a follow-up to The Psalms as Christian Worship (Eerdmans, 2010). Like the previous volume, the goal of The Psalms as Christian Lament is to provide an “informed historical-theological-pastoral insights into ten lament psalms” in which the others who provide a basis for a “theology of lament.” In order to achieve this goal, each chapter begins with a short history of interpretation before turning to an exegetical study of the Psalm. Sometimes this historical study includes a single scholar, other times there are several are included. 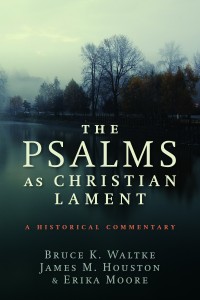 Why study these particular Psalms? As the authors point out in their introduction, Christians often struggle with the idea of lament. Our worship tends to be positive and uplifting, only rarely does a congregation offer a lament to the Lord as a form of worship. Yet the Psalter includes many worship songs in which the psalmist cries out before the Lord, lamenting their suffering and oppression. According to the introduction, there are forty-two individual laments and another sixteen corporate laments. This means lament is one of the dominating genres in the Psalter.

The book studies ten lament psalms, including six of the seven traditional penitential psalms (Psalm 51 appears in the previous volume). Each chapter begins by listening to the “voice of the church.” This section James Houston selects one or more ancient commentary on the Psalm as an example of how the Psalm was read at various points in church history. By examining the range of ancient and medieval writers on the following list, it seems clear the examples were chose to provide various kinds of commentary on the Psalms. There is both chronological and theological diversity in the chosen commentators. Houston does not quote the historical commentaries at length, so in this sense the book is not the same sort of tool as the Ancient Christian Commentaries (InterVarsity Press). After introducing the writer and placing him in historical context, Houston focus on how the individual writer drew theological implications from the Psalm under examination.

After this historical section, for nine of the chapters Bruce Waltke provides a new translation of the psalm with textual notes on syntax and textual variants. Erika Moore provides the translation and exegesis for Psalm 39. After his translation, Waltke sets the literary context of the Psalm by observing canonical links to nearby Psalms. For example, Psalm 32 has a number of lexical and thematic links to Psalm 31, implying the two Psalms could be read together. This juxtaposition in the canon of the Psalter can provide some insights for interpretation. In addition to literary context, Waltke comments briefly on Form Critical approaches to the Psalm. For the most part this is a short note explaining why the Psalm is a lament or penitential Psalm. Waltke also briefly comments on “Rhetorical Criticism,” by which he means the structure of the Psalm (stanza, strophe, etc.) Sometimes these are summed up into a single section on “form and structure;” the headings are inconsistent in the book. In the final section before the commentary he provides a very short summary, the “message of the Psalm.”

Conclusion. Like the previous volume, The Psalms as Christian Lament: A Historical Commentary will appeal to many Christians who want to read the Hebrew Bible through the lens of some of the greatest exegete of the Church. Although it does not provide access to the original commentaries of these ancient writers, the summaries will give most readers a sense of how Christians have approached Psalms of laments at various times in history.

However, I think the organization of the chapters could be improved. I would have preferred to have the historical material after the exegetical section. To my way of thinking, I prefer to have a solid idea of what the Hebrew text actually says before encountering how it was understood later in Church history. Placing the historical section first cannot help by color the reading of the Psalm, perhaps obscuring the meaning of the text as it appears in the Hebrew Bible. To be fair, the book is subtitled A Historical Commentary; any reader who shares my suspicion of Reception Criticism can simply read the sections in reverse order.

Reading how a particular Psalm was understood by the later church is important and I appreciate these sections (especially since church history is not my specialty). This project makes me wonder of a similar book could be written which focuses on the Psalms as Jewish Scripture. I would be very interested in reading a commentary which has the same level of exegetical rigor but traces the reception of selected Psalms through the Second Temple Period (including the New Testament), then beyond the Second Temple Period into medieval Jewish exegesis. I know bits and pieces of this exist, but I know of nothing like this single readable volume for Jewish exegesis.

The Psalms as Christian Lament is an excellent contribution to the study of the Psalms if only for Waltke’s exegetical comments. That the Christian history of interpretation is included is a bonus.