This new contribution to the Handbooks of Old Testament Exegesis covers a huge section of the Old Testament canon. Gary Smith has already contributed a commentary on Isaiah in the New American Commentary series (B&H, 2007, 2009), The NIV Application Commentary on Hosea, Amos, Micah (Zondervan, 2001), the Mentor commentary on Amos (Mentor, 1998), as well as The Prophets as Preachers (B&H 1998). 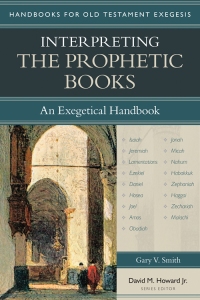 Smith begins with a discussion of prophetic literature. This first chapter is divided into a discussion of the genre of written prophecy and a brief introduction to the literary aspects of prophecy. Smith describes prophecy as having three “temporal categories.” First, some prophecy refers to events in the life of the life of the prophet (the present), some prophecies refer to a “future era.” His third category is “symbolic apocalyptic prophecies.”

Like other books in this series, Interpreting the Prophetic Books suffers from the limitations of the series. Since the goal is a short primer, there is no way for/ Smith to adequately cover even the four major prophets. Since the book is designed to cover 17 books, Smith must dispatch the major themes of each prophet in twenty-four pages (chapter 2) and the historical context in a mere nine pages (chapter 3)! This third chapter also includes a short note on Ancient Near Eastern prophecy and a primer on textual criticism in the Prophets.

A valuable aspect of this book is the section on interpretive issues unique to the prophetic books (chapter 4). Smith first deal with the problem of “literal vs. metaphorical.” There are many examples of prophecy which was fulfilled literally (Amos’s prediction that Israel would go into exile “beyond Damascus” Amos 5:27), but there are other examples of prophecy given in poetic language which remain “nebulous” (116). Smith uses Isaiah 42:14-16 as an example of a prophecy that is not particularly specific and contains highly evocative metaphoric language such as describing God’s anguish over his people as like the pain of a woman giving birth. When this kind of metaphoric language is used in a future prophecy, the application is even less clear. Using the example of Isaiah 42:1, Smith points shows how four different commentators read the broad metaphors in quite different ways (120).

Second, Smith asks if the meaning of prophecy is limited by its context. For a prophet like Haggai, there is a particular time and place which creates the background context for the prophecy. But an eschatological or apocalyptic prophecy has no immediate connection to the context of the prophet (121) since it refers to something in the future of the prophet and perhaps still future for the modern reader. Sometimes later New Testament progressive revelation makes the prophecy more clear, but Smith urges humility when approaching these prophecies.

Third, the conditional / unconditional nature of prophecy causes a number of problems for the interpreter. While some prophecies are explicitly conditional, others do not seem to be conditional yet remain unfulfilled. Smith cites Micah 3:12 as a vivid prophecy of the destruction of Jerusalem that remained unfulfilled after Hezekiah responded properly to the Lord. Smith cites Jer 18:7-10 as a hint many prophecies are conditioned on a proper response even if the original prophecy did not make the contingency obvious.

Fourth, Smith deals with the problem of both near and far fulfillments of prophecy. There are many “day of the Lord” prophecies which seem to have a fulfillment in the fall of Samaria or Jerusalem, yet are not fully realized in those historic events. For example, there are many prophecies concerning the restoration of Israel and Judah to the land which are not fulfilled in the end of the exile, such as God “pouring out his Spirit” on his people (Ezek 36:27, Joel 2:28-29).

Since most readers of this book will be Christians, Smith discusses the problem of fulfillment of Old Testament prophecy in the New Testament. Sometimes a New Testament writer claims a messianic prophecy is fulfilled even though it is hard to see how that is the case from a modern perspective. For example, Matt 2:15 claims the sojourn in Egypt was the fulfillment of Hos 11:1, a text describing Israel as a child coming up out of Egypt. But in the context, this looks back at the Exodus or forward to a new Exodus at the end of the exile, but there is no clear reference to the Messiah being taken to Egypt as a child. Evangelicals have offered several ways to approach these exegetical problems (double fulfillment, a “fuller sense,” pesher and typological interpretations, for example).

Last in this section, Smith asks if prophecy is always fulfilled. This may seem like an odd question, but there are examples when a prophecy seems to clearly predict something which does not occur. Jonah is an obvious example, although implied contingency may be a solution (Nineveh did repent) or near/far fulfillment (Nineveh did fall eventually). In other cases, there is only a partial fulfillment because a prophecy was stretched to cover many more years than first anticipated (the exile for example). For some difficult prophecies such as Ezekiel’s prediction Babylon would destroy Tyre, Smith encourages the reader to humbly admit there is something anomalous in the prophecy and that we do not fully understand the situation (140).

Chapters 5-6 deal with proclaiming the prophetic texts and drawing applications from these sometimes obscure passages of Scripture for contemporary Christians. These two chapters provide a hermeneutical strategy for reading prophetic texts and several examples of proclaimed prophecy.  First, the exegete must define the setting of the prophecy. This requires a study of the political, socio-economic and religious setting of the prophet. Second, the exegete must fully appreciate the nuances of the literary context, including the genre of the prophecy as well as any elements of biblical poetry present in the text. From this research, the exegete can develop a “descriptive outline” of the text. From this outline, basic steps of exegesis will fill in the details (word studies, background studies, etc.)

Once the descriptive outline has been detailed for the passage, the exegete must find a way to present the material to an audience. This requires using the needs of the audience to develop a thematic outline and illustrating the main principles of the text which will be of importance to the audience. Smith encourages a sermon presentation that is both theological and practical and calls for some change in action or thinking. He illustrates this method with Isaiah 31:1-9 (a near-fulfillment) and Jeremiah 23:1-8 (a distant fulfillment).

Conclusion. While some portions of this book are extremely brief, the hermeneutical method presented by Smith is clear and useful. Certainly I would have liked to see far more detail in chapters 2-3, but detailed descriptions of the prophet books, especially with respect to the formation of the books goes well beyond the goals of this short handbook. A second mild criticism is the lack of attention to application of the prophets to contemporary social issues. Since many of the prophets accused their listeners of abuse of the poor and needy and a general lack of justice in their society, it seems to me this message is an easy application to contemporary American culture. Third, I wonder if Smith would consider some passages in the prophets to be “un-preachable” from the pulpit in most churches. For example, Daniel 11 has so many difficulties, it is almost impossible to preach an applicable sermon which also deals with the text in any detail. Perhaps some of the more vulgar passages would be difficult to properly treat in a church context (Ezekiel 16, Nahum 2).

This Handbook reaches its goal of providing students of Old Testament prophecy the tools for teaching and preaching these important and often neglected texts. This would make a good textbook for a college or seminary class on the Prophets, especially in more conservative circles.

NB: Thanks to Kregel Books for kindly providing me with a review copy of this book. This did not influence my thoughts regarding the work.