Seifrid’s new commentary on Second Corinthians arrived about the same time as the second edition of Ralph Martin’s classic WBC commentary from Zondervan. Seifrid is known for his work on Pauline theology and more specifically Justification in the Pauline literature. His Christ, Our Righteousness: Paul’s Theology of Justification (IVP 2001) built on the foundation of his Justification by Faith: The Origin and Development of a Central Pauline Theme (Brill, 1992). As one of the editors of Justification and Variegated Nomism (Baker, 2004), Seifrid is also well-known as a defender of the traditional view of Paul over against the New Perspective. This theological background often comes through clearly in his commentary on 2 Corinthians. 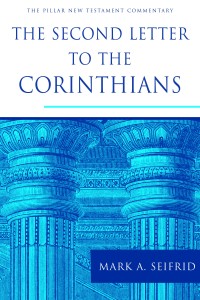 In the brief twelve-page introduction to the commentary, Seifrid first discusses the situation both before and after the writing of the second letter to the Corinthian church. Here he traces the sometimes confusing period after the reception of 1 Corinthians, a brief time which included a “painful visit” and later “tearful letter” delivered by Titus.

Second, the introduction examines the various suggestions for the identity of Paul’s opponents in the letter, which naturally leads Seifrid to the purpose of the letter. He advocates a minimal “mirror-reading,” resulting in a Jewish-Christian opponent who appeared in Corinth between the two canonical letters. Since these new arrivals were considered apostles by the Corinthian church, they have made a bad situation worse. But for Seifrid, there is nothing in the letter which can be used to clearly describe a theology of the opponents. They preach another Jesus (2 Cor 11:4) and for Paul, this is the real threat to the church.

Since there are a number of complex theories regarding the composition of 2 Corinthians, the third section of the introduction deals with the integrity of the letter. After a short synopsis of the usual divisions suggested in scholarship, Seifrid concludes the alleged incoherence and inconsistency is “more apparent than real (xxxi). Paul’s defense of his mission “constitutes the thematic unity” for the letter.

Finally, Seifrid offers a few comments on the theology of the letter. Despite the fact 2 Corinthians is a deeply personal letter, Paul’s concern is to lay out clearly the marks of a true apostle. For the Corinthians, there is “jarring contrast between his powerful letters and his pitiful presence” (xxxii). Seifrid sees this as a hermenutical problem, and the whole of Scripture is at stake. For those who are outsiders, a veil covers their face and prevents them from seeing God and his saving work. The opponents have been blinded by the god of this world and are therefore “unbelievers” by definition. Only those who are “in Christ” are free in see the truth of the Gospel as revealed now by Paul, God’s representative.

In my view, Seifrid’s introduction is too brief. While I agree there is little or no merit to many of the partition theories for the letter, I would have liked more engagement with contemporary scholarship on the literary issues, whether in the introduction or the appropriate places in the commentary. While I thought his section on 6:14-7:1 was excellent, there is no hint this section is sometimes seen as a non-Pauline insertion. There is no interaction with Betz’s theory that chapters 8-9 are administrative letters, he simply states that chapters 8-9 are “integral to Paul’s larger purpose in the letter of binding the Corinthians to the other churches and to Christ” (317). Perhaps including a detailed discussion of these literary issues would have distracted from Seifrid’s overall goal of explaining the text of the letter as we have it, but given the strong objections to the unity of the letter in New Testament scholarship, I am surprised the issue is not addressed.

The commentary follows the same pattern the other Pillar commentaries. After a translation of the text, Seifrid briefly introduces the pericope, usually setting the section into the context of the letter as a whole. The commentary proper proceeds verse by verse, commenting primarily on the English text, although occasionally he comments on a transliterated Greek word. Greek and Hebrew untransliterated in the footnotes. There are less exegetical comments on the Greek text than other PNTC commentaries. In fact only rarely does he comment on the text. Comparing this to D. A. Carson’s Matthew or Colin Kruse’s Romans in the same series, there is very little exegetical material indeed.

Seifrid’s comments on 1 Cor 5:21 are an example of the more theological nature of the commentary. For Seifrid, “not reckoning the trespasses of the world” is a “forensic event” and reconciliation and justification refer to the same event, the cross and resurrection (260-261, and note 539). This verse offers Seifrid the opportunity to write more than eight pages on justification from a decidedly Lutheran perspective (citing Luther and Melanchton at length in the notes). His discussion is excellent and the theology presented in this section certainly reflects the “traditional view” of Paul and justification, but there is little discussion of the exegetical details in the text itself. For example, a discussion of the meaning of γενώμεθα in the ἵνα-clause is missing. Nor does Seifrid discuss the potentially rich allusion to Isaiah 53. But this is the style of the commentary and this criticism should not detract from the value of the commentary.

Interaction with other commentaries is minimal in the body of the commentary, but Seifrid is obviously well-informed by a broad spectrum of scholarship. It is not surprising that Luther is one of the most cited commentaries in the notes (according to the index), but only one reference to Ralph Martin’s WBC commentary is strange. (Ironically, Barack Obama is also cited one time as well!) Another difference between this commentary and others in the PNTC series is Seifrid use of German scholarship. Seifrid often cites the work of the Lutheran systematic theologian Oswald Bayer.

There are three excurses embedded in the commentary. For example, after Paul’s reference to himself as a “minister of the New Covenant” in 2 Cor 3:6, Seifrid offers 4 pages on “Paul’s Understanding of ‘Covenant.’” This brief overview of a monograph-worthy topic is a kind of biblical theology of Covenant,” beginning with Galatians and concluding with Hebrews. Seifrid concludes Paul’s contrast between the New and Old Covenants in 3:6 and 3:14 is consistent with both Galatians and Hebrews.

Conclusion. Seifrid’s commentary on 2 Corinthians is another excellent contribution to the study of this oft-neglected letter of Paul. While it is certainly more theological than exegetical, it will nevertheless be a valuable resource for Bible teachers and pastors for many years.

8 thoughts on “Book Review: Mark A. Seifrid, The Second Letter to the Corinthians”