The chant of the Ephesians in Acts 19 is “Great is Artemis!”  In order to better understand the impact of Paul’s ministry in Ephesus, it is a good idea to know a few things about this important god.  Since footnoting is difficult in the blog format, I will simply state that the following essay draws on a number of sources, including appropriate articles in the Anchor Bible Dictionary, The Dictionary of Deities and Demigods, and Ben Witherington’s commentary on Acts.

The goddess Artemis was a virgin huntress and was worshiped throughout the ancient world.  She is the daughter of Zeus by Leto, and the twin sister of Apollo and is usually included in the 12 Olympian gods.   The origin of her name is disputed; it may come from the Greek artamos, “butcher,” or arktos, “bear.”  On the other hand, Pausanias lists 64 different local variations on the name of Artemis (By way of comparison, Zeus has 67 local variations, Athena has only 59). The Latin Vulgate used the Latin form of her name, Diana; the form appears in Luther’s version and the KJV as well.  She has the ability to turn people (or gods) into animals.  In one legend she changed here hunting companion (Callisto) into a she-bear.  When Orion tried to rape her, she transformed him into a scorpion.

She is usually depicted with a bow and accompanied by deer, and was extremely beautiful.  She is also often combined with the “mother goddess” and therefore a fertility goddess and protector of young children.   But in fact she is rarely portrayed as a helpful goddess. This aspect has a dark side, since Artemis is given the right to kill women at childbirth (Iliad 21.479-488), and she is sometimes combined with Hecate, the goddess of witchcraft. She is usually shown wearing a crown with 12 stars, indicating her power over fate (ie., the zodiac). While women called on her for protection during childbirth, they also feared here because the goddess may cause the death of a child as well as she might protect it.  Since she is associated with women, Artemis is sometimes associate with the moon and menstruation.  In the earliest legends (Hesiod, for example), Helios (the sun god) and his sister Selena (the moon god) are roughly equivalent to Apollo as the sun god and his sister Artemis.  Philo of Alexandria calls Artemis the moon god (De decal. 54) When boys and girls came of age they sacrificed a hair-lock to the goddess on the third and last day of the Apatouria or clan festival.  Girls made a similar sacrifice when they married, boys when they entered into their father’s clan.

Artemis was worshiped in many locations, but the temple in Ephesus was considered one of the wonders of the ancient world. While Ephesus is known to have worshiped as many as 25 other gods, Artemis was consider the city’s chief god.  An inscription calls her “the goddess who rules our city” (SIG 867,29).  Artemis was worshiped from Spain to Syria, Strabo (Geog 4.1.5) lists thirty three other temples of Artemis in the ancient world.  Inscriptions from Ephesus describe Artemis as a goddess who answers prayer (I.Eph 26.1, 18) and she is called “savior” (I.Eph 26.4, 18), although this salvation is likely healing from sickness and disease.

The temple at Ephesus was used as a bank.  “Dio Chrysostom of Prusa describes it as a place where people from all over the Roman empire, private persons, allied kings and townships, had deposited large sums of money (Or. 31, 54).”  It is possible money was lent by the temple as well, although this is disputed.

The temple hosted festival and processions during the month of Artemision.  Every day during this month was a holy day and all judicial activity was to cease during the month.  The image of Artemis would have been dressed and adorned beautifully, and placed in a cart to travel through the city, accompanied by the worshipers. Little is known about the nature of the sacrifices, although there were many during the month long festival.  It may be that Artemis was particularly identified with magic, since she was often identified with Hecate, the goddess of magic.  Tatian in the second century simply states: “Artemis is a magos” (Or. ad. Gr. 8, 2).

Since Artemis was such an important part of Ephesian culture, the success of Paul’s gospel would be interpreted as an attack on the culture and economy of the city.

The riot in Ephesus (Acts 19:23-41) is an important story in the developing plot-line of Acts, although Paul is not really a part of the story. We are told that the silversmiths fear the rise of Christianity in Ephesus, Paul’s companions are arrested, and the city manager calms the crowd. The reader does not know what happens to Paul during and after the riot. 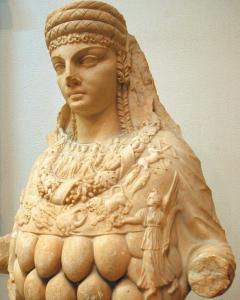 For this reason, some speculate Paul was arrested and imprisoned in Ephesus, a time reflected in 1 Cor 15:32, “if I fought the wild beasts in Ephesus…” The implication is Paul was forced into some sort of gladiatorial punishment, although the text may refer to his opponents rather than literal animals. If Paul was in prison in Ephesus, then he may very well have written Philippians, Colossians and Philemon while under arrest, rather than from Rome. As a Roman citizen, it is doubtful Paul would have been sent into the gladiatorial games, and if he had, it is even less likely he would have survived. Although Paul’s imprisonment in Ephesus is an argument from silence and not particularly persuasive, it does solve some problems with those books.

The main point of the riot in Ephesus is that that Christianity has made such an impact on the culture of Ephesus that the culture begins to “fight back.” At the end of this attack on Paul’s mission in Ephesus, the city official concludes what Paul preaches is not against Rome nor is it illegal according to Roman Law. This seems to be a major sub-text in the book of Acts. Luke wants to inform us the Romans found Christianity compatible with Roman Law.

A second problem addressed by this section of Acts is the “parting of the ways.” When did Christianity become distinct from Judaism? As far as the Romans are concerned in Acts 19, Christianity is still the same thing as Judaism. In Acts 18 the Jews in Corinth argued that Paul was not one of them. In the riot at Ephesus the crowds do not make a distinction between Alexander (a Jew) and the Christians. At this point in the development of Christianity, any decision about the Christians may have had an indirect impact on the Jewish community.

Perhaps the most important theme of this incident is the fact Christianity challenged the greatest pagan cult in the ancient world and was seen as a serious threat to that cult. I think that this is the challenge of the story: how has contemporary Christianity impacted culture?

The answer is (sadly) either “not at all” or as something which secular society mocks and then promptly ignores.