Matthew 8:18 is a transition between the three healing stories in Capernaum and the three stories loosely concerned with following Jesus. First, two would-be disciples approach Jesus and Jesus responds with rather difficult, enigmatic sayings. Second, Jesus demonstrates his authority of creation itself, yet his own disciples have “little faith.”  Third, Jesus demonstrates his authority over demons, and a whole town demands he leave their region. In 9:1, Jesus crosses the lake again and returns to “his own town” Capernaum. 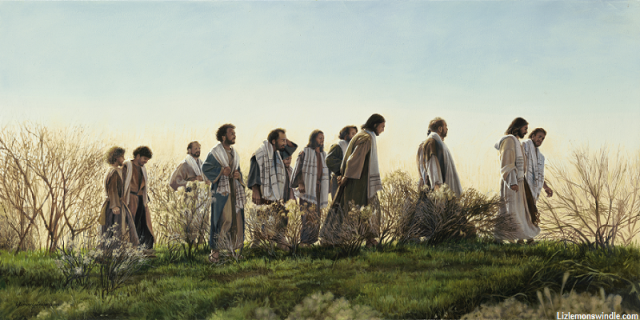 Luke 9:57-61 has close parallels to these two would-be disciples, but adds a third who wants to return home to say farewell to his family, evoking Jesus’s well-known saying, “No one who puts his hand to the plow and looks back is fit for the kingdom of God.” In the first case, Luke does not identify the mane as a scribe (he is “someone,” τις).

A scribe approaches Jesus and expresses his desire to become a follower of Jesus. A scribe (γραμματεύς) usually refers to someone who is clerk or secretary, someone who can read and write and is trained in dealing with official documents. However, in Matthew the scribes are usually experts in the law, or the biblical scholars. The scribes were who people would look to for answers about how to interpret and apply the Law to a specific situation.

This scribe ought to call to mind the summary statement at the end of the Sermon on the Mount; Jesus taught “as one who had authority, not as their scribes” (οὐχ ὡς οἱ γραμματεῖς αὐτῶν).

The scribe addresses Jesus as “teacher” (Διδάσκαλε, rather than ῥαββί, רַבִּי) and says he will follow Jesus wherever he goes. This is the way a student might ask a rabbi to enter into a formal discipleship relationship. Nolland suggests the man sees Jesus as an important somebody with whom he would like to be associated (Nolland, Matthew, 365).

In contemporary academia, someone has more gravitas if they did their doctoral work at a top-notch university or had an academic star as their thesis advisor. Sometimes even taking a single class with a particularly famous scholar is enough to boast about. (Michael Bird once asked me for directions in the book room at SBL, and I put that on my resume.)  Perhaps this scribe wanted to pad his resume by sitting under Jesus’s teaching for a few months.

But this is not the kind of disciple Jesus is looking for. Prior to the Sermon on the Mount Jesus called Peter, Andrew, James and John to follow him and they immediately abandoned their business (fishing) and followed him (Matt 4:20). That is the kind of followers Jesus demands, in contrast to the scribe who is looking for a traditional rabbi/teacher-student relationship.

The response contrasts the type of discipleship the scribe might expect with Jesus’s unusual demands on his disciples.  This is the first time in the Gospel of Matthew Jesus has identified himself as the “Son of Man” (there are a total of 28 Son of Man sayings in Matthew). Although the phrase does appear in Ezekiel (always God referring to the prophet as a human), it is more likely the title is drawn from Daniel 7:13-14. After a series of kingdoms, Daniel sees a son of man who comes before the Ancient of Days to judge the final kingdom and establish his own everlasting kingdom.

In this case, the Son of Man has a humble ministry among the poorest in Israel. He says the animals have place to live, but the “Son of Man has no place to lay his head.” If Son of Man alludes to the Jewish expectation of a David-like king who would rule over Israel in peace and prosperity, it would be shocking to hear he has no “place to lay his head.” Perhaps this alludes to David before he became king, running from King Saul, although there is no exact parallel to this saying in 1 Samuel or the Psalms.

T. W. Manson argued “birds of the air” were apocalyptic symbolism for the gentile nations and foxes were the Ammonites (Manson, Sayings of Jesus, 72). In Luke 13:32 Jesus calls Herod Antipas “that fox.” Manson suggests Jesus means something like, “everyone is welcome in Israel except true Israel (the Son of Man).” Bailey suggests political overtones in the saying, “The Son of Man stands powerless and alone. Are you serious in wanting to follow a rejected Son of man?” (Through Peasant Eyes, 25).

Certainly, Jesus is not homeless in the modern sense of the word. In fact, he will return to “his own town” in Matt 9:1 and live in Peter’s house in Capernaum. However, following Jesus is not like following a traditional rabbi; becoming a disciple of Jesus is to become a “scribe of the kingdom” (13:52) who sells everything he has in order to obtain the kingdom (13:44-46).

Followers of Jesus are the disenfranchised, the poor and the fringes of Israel, not the Herodians or the Temple aristocracy. Jesus does live a life of voluntary poverty and he does have an itinerant ministry that takes him all over Galilee and Judea. But his point here is that he not welcomed by the “in group.” Yet he will be welcomed by sinners (9:10-13).

Jesus is therefore telling the man that following him as a disciple is not likely to result in a traditional scribal role (Decent salary? Benefits? Comfortable perks of the job?). In fact, if someone wants to follow Jesus, they must be rejected by the other scribes and teachers of the Law, challenged by the Pharisees and he must be prepared to suffer along with him. Following Jesus will lead to Gethsemane and Golgotha (Bailey, Through Peasant Eyes, 24).

Did the man follow Jesus? Davies and Allison think he was not a “friendly inquirer who is (implicitly) bidden to follow Jesus. On the contrary, the scribe, we are to think, is turned away” (Davies and Allison, Matthew, 2:41). On the analogy of the rich man who asks Jesus what he must do to inherit the kingdom, perhaps this scribe went away from Jesus disappointed with the answer he was given (Matt 19:16-30).