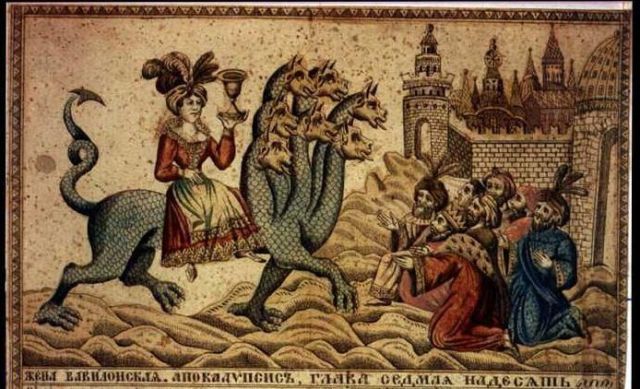 The phrase translated “greatly amazed” (θαυμάζω…θαῦμα μέγα) in the NRSV could have the sense of “greatly disturbed,” the context determines θαυμάζω is used in a good or bad sense (BDAG). Some scholars consider this phrase reflect a Hebrew phrase (NewDocs 5, 35). The LXX uses θαυμάζω with the sense of “appalled” (Lev 26:32, translating שׁמם, “to shudder, be appalled”). What John sees in 17:2-6a is shocking and he needs the angel to explain the terrifying vision. In 17:8 the nations will “marvel” at the scarlet beast, although this still could be read as “were appalled” when they saw the beast. Although this might be overinterpreting the text, perhaps the point is John is appalled by the great prostitute drink on the blood of the saints, but the world is amazed and worships her and the beast she rides.

Is the scarlet beast the same as the beast from the sea introduced in Revelation13? This seems more likely since there are a number of parallels between Revelation 13 and 17. Like the beast in 13:1, this scarlet beast the bottomless pit, or the Abyss (ἄβυσσος). In Revelation 11 the bottomless pit is the home of the demonic locust horde, ruled by Abaddon. It is possible this beast is the king of the Abyss, but it is more likely the Abyss and the Sea as parallel terms. This beast rises a last time to go to his destruction (ἀπώλεια), a word related to the name of the king of the Abyss, Apollyon (Rev 9:11).  All the inhabitants of earth who are not in the Lamb’s book of life are “astonished” at this beast. This is parallel to Revelation 13:3 when the beast from the sea is wounded and appears dead yet appears to come back to life. The “names written in the Lamb’s book of life” is repeated from Revelation 13:8.

Like the mark of the beast, the angel reveals the mystery of the woman and the beast she rides (17:7). The beast has seven heads and ten horns. The heads are the seven hills on which she sits but also seven kings. The horns are ten kings who have not yet received a kingdom (17:12-14). The waters on which she sits are the great multitudes of the nations (17:15).

Juvenal, Satires 9.130 “Never fear: so long as these Seven Hills stand fast you’ll always have friends in the trade, they’ll still come flocking from near and far, by ship or by coach, these gentry who scratch their heads with one finger.”

For many expositors, the seven hills refer to Rome and the kings are a series of kings in Roman history. The trouble is where to start the sequence and who to include in the series. Aune offers nine variations, some beginning as early as Julius Caesar and others terminating as late as Nevra. Some of the schemes include Galba, Otho, and Vitellus, others omit these three minor emperors who rule briefly in the year between Nero’s death and Vespasian’s ascension to the throne.

Greg Beale, on the other hand, takes the mountains as symbolic of strength in Apocalyptic literature and the number seven as referring to completeness (cf. Aune 3:948). For Beale, this text does not refer to seven kings in any sequence but rather the mountains and kings “represent the oppressive power of world government throughout the ages” (Beale, Revelation 889).

It is also possible to focus on the sixth king as John’s main interest and ignore the first five. It is this sixth king who is well known to the readers (Nero or Domitian, depending on the date of the book). A final king will come soon but will only remain a short time. Bauckham pointed out the odd wording of seven kings, then an eighth is a “‘graded numerical saying,’ which uses two consecutive numbers as parallels” (cited in Aune, 3:950). Smalley suggested the “eighth king” is probably Domitian as Nero redivivus (Thunder and Love, 135-36).

This seems hopelessly complicated. But the point of the vision is not far from Daniel’s visions of empires in Daniel 2, 7 and 11. The kingdom of man will not stand long, nor will God allow the final kingdom to continue to persecute his people. Babylon is about to fall!