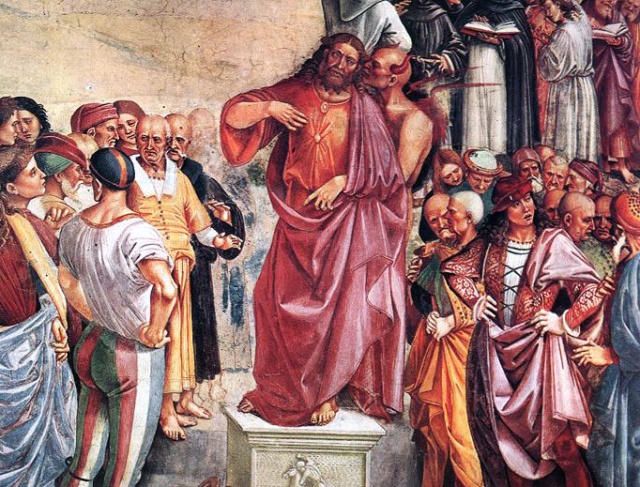 As with the first beast, many commentators think this is an allusion to the two primordial beasts in Job, Leviathan and Behemoth. In several Second Temple period texts, God separated Leviathan and Behemoth on the fifth day of creation (1 Enoch 60:7-101, 24; 4 Ezra 6:47–54; 2 Apoc. Bar. 29:4). These two beasts are prepared for the “great day of the Lord” when they will be turned into food (1 Enoch 60:24).

1 Enoch 60.7–10  On that day, two monsters will be parted—one monster, a female named Leviathan, in order to dwell in the abyss of the ocean over the fountains of water; 8 and (the other), a male called Behemoth, which holds his chest in an invisible desert whose name is Dundayin, east of the garden of Eden, wherein the elect and the righteous ones dwell, wherein my grandfather was taken, the seventh from Adam, the first man whom the Lord of the Spirits created. 9 Then I asked the second angel in order that he may show me (how) strong these monsters are, how they were separated on this day and were cast, the one into the abysses of the ocean, and the other into the dry desert. 10 And he said to me, “You, son of man, according (to the degree) to which it will be permitted, you will know the hidden things.”

The second beast has two horns like a lamb, but it speaks with the voice of the dragon. The dragon has already been identified as Satan. The two horns are unusual since they are the usual number from a lamb; usually animals have many horns. It is possible, then, the horns do not represent rulers (as with the first beast), but rather suggest the appearance of harmlessness. But when the harmless looking beast speaks it is communicating the word of the Dragon, Satan. In the opening paragraph I suggested John has created a satanic parody of the trinity. If that is the case, then this second beast is like the Holy Spirit. Rather than communicating the word of God, it speaks the word of the Dragon.

What does this “false prophet” do? Unlike the first beast, John gives a series of activities associated with the false prophet and many evoke the activity of the Holy Spirit in the New Testament. (Note I am using masculine personal pronouns here because they are in the Greek text; this is a possible argument against a parody of the Holy Spirit since the Greek for spirit is neuter.)

First, the false prophet causes the inhabitants of the whole world to worship the first beast. If the first beast refers to the Roman empire, then worshiping the Roman empire naturally brings the imperial cult to mind. Most commentators understand this as an allusion to Daniel 3; Nebuchadnezzar set up an image and demanded everyone worship it or be put to death.

Third, he heals the near-fatal wound of the first beast. This is the greatest of miracles, a parody of the resurrection of Christ. In Revelation 13:3 the first beast appeared to have died and was brought back to life, now in 13:14 it is the power of the false prophet that did this great miracle. It is important to observe the first beast was not actually dead, so this is a false-resurrection.

Fourth, he makes the image of the first beast speak.  This was a belief of the first century, that statues could magically be made to talk. Certain cults would use ventriloquism to make statues appear to talk. In this case the statues will pronounce judgement on all who do not worship it.

Fifth, he requires that all men receive the mark of the beast on their hand or forehead. This may allude to increasing pressure on Christians in Asia Minor to participate in the imperial cult. I will deal with the Mark of the Beast in another post.

John’s description of the first beast is consistent with warnings against false prophets in Deuteronomy 13:1-3, Jesus’s warnings about false prophets and false messiahs (Mark 13:21-23, Matt 24:23-25), as well as Paul’s description of the coming Lawless one (2 Thess 2:9-11). The Lawless One is empowered by Satan and will have “all power and false signs and wonders” in order to deceive those who have refused to love the truth. People believe these deceiving signs because God has sent a “strong delusion” so that they believe what is false. Similarly, here in Revelation 13 the second beast does great signs to convince the whole world of the power of the first beast.

Other Second Temple period texts describe the coming evil one as doing many great signs. Aune points to Sibylline Oracle 3.63-74 since it combines the Return of Nero myth with the satanic Beliar performing great miracles, including raising the dead:

In summary, the second beast in Revelation 13 is the religious support for the empire and emperor described by the first beast. Although many in the modern west think of the separation of church and state as good and normal, the Roman world did not think of the political world as separate from the religious. The emperor demonstrated proper piety toward the gods and was deified and worshiped in the imperial cult. The imperial cult served to unified the empire and served to broadcast imperial propaganda throughout the Roman world.

Although little is known about the function of the imperial priesthood, John appears to be describing the function of the imperial cult and its priesthood. (Aune, 756; Beasley-Murray, 216). If the first beast is the Roman empire and the horns are various emperors, then the imperial cult was the religious support system for the empire, especially in Asia Minor. This will be clearer with the final activity of the second beast, forcing all people to take the mark of the beast.