Harvey consciously geared this commentary to non-academics. His goal is to assist readers of Romans who are active pastors, teachers, and Bible students. There is no detailed history of interpretation, no deep dive into extra biblical literature, no closely argued discussions of finer points of Greek verb tenses, and no extensive comments on textual criticism. Readers interested in these issues should consult his Romans: Exegetical Guide to the Greek New Testament (B&H Academic, 2017). Although his bibliography includes commentaries since 1965, his main lights are commentaries by Cranfield (ICC, 1980), Dunn (WBC, 1988), Jewett (Hermenia, 2007), Longenecker, (NIGTC 2016), Moo (NICNT, 1996), and Schreiner (BECNT, 1998). Moo and Schreiner have both published second editions since the completion of Harvey’s commentary. 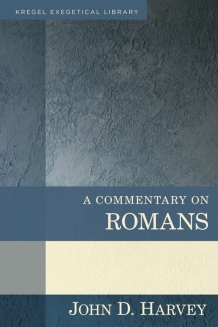 He explains his exegetical methodology as answering three questions about each verse (p. 10). First, what did Paul say? Second, why did he say it? And third, what should I do with it? For more detailed methodological issues, readers should consult his Interpreting the Pauline Letters (Kregel Academic, 2012).

In the 40-page introduction, he argues Paul wrote the entire letter from Corinth in A.D. 56-57. He provides several pages of background for a letter, including a brief historical, social, cultural, and religious setting for Christianity in the city of Rome in the middle of the first century. He believes the audience as both Jews and Gentiles and that the letter addressed as a “cluster of issues.” The introduction also includes several pages and charts on genre and structure of Romans, including a brief look at the rhetoric of the letter.

Each section of the commentary begins with a fresh translation of the text with notes with brief textual critical issues and syntactical observations. These observations include grammatical categories but only rarely make reference to advanced grammars (those details are often found in his Exegetical Guide). Following this translation, Harvey sets the context and structure of the pericope in the overall outline of Romans. This is followed by a brief statement of the basic message of the section and detailed exegetical outline. Following this outline, he offers an explanation of the text, usually covering several verses at a time. In the body of the commentary Greek appears in parentheses without transliteration. Almost all interactions with commentaries appears in the footnotes. This makes for a concise commentary that does indeed focus on what Paul said and why did he say it?” Following the explanation of the text, Harvey makes a few comments under the heading Theology and Appropriation.” In this section he comments on biblical-theological issues in order to answer his third question, “what should I do with it?” In most cases, Harvey concludes with the words “Paul’s primary purpose for including his paragraph…”

Harvey translates the phrase διὰ πίστεως Ἰησοῦ Χριστοῦ Romans 3:22 “by faith in Jesus Christ” and τὸν ἐκ πίστεως Ἰησοῦ. in verse 26 as “the one who is of faith in Jesus.” He states both genitives are objective (p. 127). He does not enter into the scholarly discussion of pistis christou other than a footnote pointing to Schreiner’s discussion and conclusion in favor of the objective genitive.

The same is true for the meaning of “all sinned” in Romans 5:12. He observes there are five common interpretations and cites additional scholarship in the footnotes (p. 168). Harvey does not wade into the deep waters of the various ways the verse is used in systematic theology. Because his purpose in the commentary is the basic meaning of the text, he concludes “Paul’s primary purpose was to inform his readers that righteousness, acquittal, and life now apply to them because of what Christ has done as certain as sin, condemnation, and death previously applied to them because of what Adam did” (p. 169).

Comparing six major views on the identity of the “I” in Romans 7:2-25, he observes that although the options are bewildering, it is “best not to expend time and energy trying to decide, for example, whether ‘I’ describes Paul before or after his conversion” (p. 199).

The purpose of Romans 9-11 is the fulfillment of God’s plan. He argues God will fulfill his plan and keep his word to Israel, using Israel’s unresponsiveness to show mercy to all. On the controversial issue of what “all Israel” means in Romans 11, Harvey compares six recent commentaries in a chart (with Calvin and Schreiner combined). He agrees with Longenecker that “all Israel” refers to “a large number of elect an ethnic Jews near the end of history” (p. 291).

On the usually controversial issue of Paul’s female coworkers, Phoebe is a woman of high social standing in some wealth who was a leader in the church (p. 376). Like Prisca and Aquila, Andronicus and Junia are a husband and wife ministry team who were well known to the apostles (p.382, citing this Exegetical Guide for the details).

The book ends abruptly on page 400. There is no conclusion, no indices and only a select bibliography (pp 15-20).

Conclusion. There have been several second editions of major commentaries in Romans published in the last few years. Harvey’s commentary is less than half the length of the six major commentaries he works with in this book and it is far less engaged with contemporary Pauline scholarship than Longenecker, Moo, et al. But this should not be considered as a criticism, Harvey’s commentary achieves when it’s set out to accomplish, a simple explanation of what Paul said and why he said it for the busy pastor struggling to prepare Bible classes and sermons or Bible student who wants to go deeper than the average Bible study. This commentary is similar in approach to Grant Osborne’s Romans commentary and should not be compared to recent encyclopedic commentaries on Romans.

Other Reviewed Commentaries in this Series:

Duane Garrett, A Commentary on Exodus

Robert B. Chisholm, A Commentary on Judges and Ruth

NB: Thanks to Kregel for kindly providing me with a review copy of this book. This did not influence my thoughts regarding the work.