The last line of John’s description of the demonic locust rising from the bottomless pit refers to their king, Abaddon in Hebrew or Apollyon in Greek. Both words mean Destroyer. 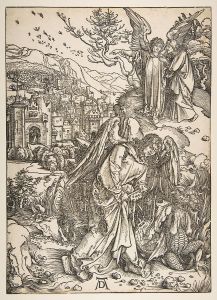 Although Proverbs 30:27 states the locust have no king, there is a reference to the king of the locust in LXX Amos 7:1. The Hebrew reads “after the king’s mowing” although translating the final three words of 7:1 is difficult since the Hebrew גֵּז is rare. The Septuagint translation of Amos 7:1 is considerably different than the Hebrew Bible: “Thus the Lord God showed me and look, the offspring of locusts is coming early, and look, one locust is Agag, the king” (LES2). The name Agag is associated with the Amalekites; in 1 Sam 15 Saul was command to attack Agag, king of the Amalekites.

This translation understands the Greek Γώγ, Gog, as Agag. The NET of the Septuagint translates this as “Gog, their king.” It is likely the translator read the Hebrew word גֵּז as Gog (גּוֹג). The same confusion appears in the LXX of Numbers 24:7, the king is Agag but the LXX has Gog. While it is tantalizing to hear an echo of Ezekiel 38-39 and a foreshadowing of Revelation 20:8, the evidence that Gog is the king of the locust is thin.

The name Abaddon appears only here in Revelation, although the word אֲבַדּוֹן is found in the Hebrew Bible a few times with reference to the abode of the dead, in parallel with Sheol (Job 26:6; Prov 15:11). In Job 31:12 it is also a location: “a fire that consumes as far as Abaddon.” Later rabbinic literature used the term for the place of punishment for the wicked (Grether, “Abaddon,” ABD 1:6).

The name is found in several fragmentary Dead Sea Scrolls as a location of the dead (the pot, sheol, etc.)

1QHa Col. xi:19-20 I thank you, Lord, because you saved my life from the pit, and from the Sheol of Abaddon 20 have lifted me up to an everlasting height, so that I can walk on a boundless plain.

1QHa Col. xi:32 The torrents of Belial break into Abaddon. The schemers of the deep howl at the din of those extracting mud.

In Revelation 9:11Abaddon is not a location but rather the “king of the locust.” In Greek, the name of the king is Apollyon, the destroyer. The Greek is related to the word ἀπολλύναι, “to destroy” but also to the name Apollo (Charles, 1:246). David Aune suggests an allusion to Nero since he claimed to be Apollo and was “identified with Belial in some early Jewish literature” (Aune, 2:535).

However, Beale suggests Abaddon/Apollyon refers to “the angel is that of the exodus plagues” (504). During the tenth plague a destroying angel swept over Egypt. Unfortunately, “destroyer” is a participle of ὀλεθρεύω rather than ἀπόλλυμι. Jubilees 49:2 calls this angel Mastema. LXX Psalm 77:49 refers to “evil angels” active in the plagues.

That Abaddon or Apollyon is associated with the Egyptian plagues would be consistent with the first four trumpets which also alluded to the plagues.