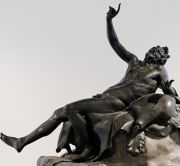 When he writes to the Corinthians, Paul must correct the church because of of their behavior at private banquets (6:12-20). The issue here is going to banquets given by the rich and elite of the city. There is a great deal of evidence concerning the types of things that went on at a Roman banquet of the first century from contemporary writers.

Bruce Winter gathers a number of references from Plutarch describing the combination of gluttony, drunkenness and sexual immorality that were a part of the “after-dinners” as he calls them. There was an association between gluttony and sexual excess, as is seen from the well known saying reported by Plutarch, “in well-gorged-bodies love (passions) reside.” The writer Athenaeus said that the goddess Cypris (Aphrodite) does not visit the poor, “in an empty body no love of the beautiful can reside.” Plutarch also said that in “intemperate intercourse follows a lawless meal, inharmonious music follows a shameless debauch” (Winter, After Paul Left Corinth, 84).

These banquets would only have been attended by the rich elite of the city of Corinth. The poor were not invited, only those of some social standing. In Corinth there was a major city-wide banquet for all citizens celebrating the games. Not only would there have been pressure to attend these banquets on a social level, there was the added pressure of begin a good citizen of Corinth and of Rome.

These sorts of banquets are in the background of 1 Corinthians. Members of the church are not visiting brothels as we might think of it today. They are attending meals with the elite of Corinth, either hosted in the home of a wealthy patron of the city or in a temple. The practice was considered not only acceptable, but in some cases required for social mobility. If one wanted to gain the favor of a wealthy patron in order to advance a business plan, then attendance at a banquet hosted by the patron was a necessity.

Why would the Corinthian Christians think that they had a right to participate in these banquets? Paul seems to have taught them that Christians are to be separate from such activities, and the strong Jewish ethic of many of the founders would have argued against going to a temple, eating food sacrificed to idols, and participating in the “after-dinners.”

It appears at the very least that some Gentile converts to Christianity did not see this kind of activity as “sin.” As with most of the problems Paul treats in 1 Corinthians, the congregation was slow to de-paganize and think about these behaviors through the lens of their new faith. The practice of going to temples to share meals with the elite of Corinth was socially desirable for the wealthy (and “wanna-be” elite). Perhaps individuals in the church thought they had to do their civic duty by doing to the banquets (a virtue) and did not yet see the additional practices as a vice yet.

What are the sorts of behaviors that are accepted (or forbidden) by local congregations in order to better fit into contemporary culture?