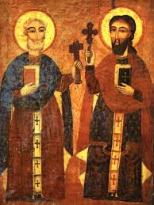 When Paul arrives in Jerusalem, he meets with “James and the Elders.”  As it turns out, there are many Jews in Jerusalem who believe Jesus is the Messiah yet are still following the Law (21:20).  This is not unexpected since Jesus said he did not come to destroy the Law nor did Jesus ever teach his disciples to reject the Law or Temple worship. Jesus did reject the traditions of the Pharisees, but he lived as any Jew might have in the first century. It is better to see Jesus calling his disciples to a deeper engagement with the Law. In the Sermon on the Mount, for example, Jesus wants his followers to obey not only the letter, but also the spirit of the Law.

James, the Lord’s Brother, has emerged as a leader in the Jerusalem church. When Paul arrives he gives a report (ἐξηγέομαι) of how God is working among the Gentiles. While the elders of the community rejoice and praise God for this, James moves quickly from what God is going among the Gentiles to a potential problem with Paul’s missionary activity. James describes the Jerusalem church as very large, the NIV has “thousands,” translating the Greek “myriads” (μυριάς). While this might seem like hyperbole, several thousand people accepted the apostolic teaching in Acts 2 and 3. It is likely additional converts in the many years that have passed and there are still a large number of Jesus-followers in and around Jerusalem at this time.

There are some among this Jewish Christian community who think that Paul has made a grace error by teaching Jews who have accepted Jesus as Messiah to turn away from the Law (v. 21).  Certainly Paul taught Gentiles they were not under the law. The letter to the Galatians is a strong condemnation of Gentiles trying to keep the Law.

With respect to Jews who are in Christ, there is no specific text which clearly indicates Paul told Jews to continue keeping the law and traditions of Israel. It may or may not be the case that Paul considered ceremonial law and traditions matters of indifference.

Ben Witherington thinks it is at least possible Paul considered traditional Jewish practices as no longer required in the present age. Galatians could be read as a repudiation of the Law, although it seems that Paul only has in mind Gentile converts. But this may be the heart of the problem: the church Paul has created is something new and different.  People are converting to a belief in Jesus as savior apart from Law rather than converting to Judaism or converting to a particular messianic conviction within Judaism (Acts, 648).

If members of the Jewish Christian community in Jerusalem had read Galatians, they may have wondered if Paul had rejected the Law himself. If rumors of his “all things to all men” ministry model reached Jerusalem, then it is likely there were Jewish Christians who thought Paul has gone too far in his desire to reach the Gentiles.

Luke certainly describes James and the Elders as polite and welcoming, but there are lingering questions about Paul’s ministry method. Luke does not create an artificial unity here, he reports a real tension in the early church over a critically important issue, the status of Gentiles in the church as well as the role of the Law.

To what extent do these two issues continue to be a problem in Acts and Paul’s letters? Is this tension still a problem in the modern church, even after the Reformation?