In an earlier post I speculated on Paul’s access to wealth during his ministry.  While Paul seems to be willing to live in whatever circumstances his mission require, that mission required a great deal of wealth. He travels with an entourage. 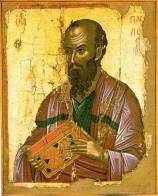 John Polhill speculated that Paul may have been from a wealthy family based on his citizenship.   In order to “buy” a citizenship, one might need to spend 18 months wages or more on the necessary bribes in order to receive the honor.  The fact that Paul was a tent maker from Tarsus may imply that he worked with the costly material cilcium, used for both tents and saddles.

Martin Hengel thought that Paul’s education may be a hint at his social status.  If he came to Jerusalem at a young age, then he was likely from a “well-to-do” family which could afford to send a son to study on Jerusalem. Certainly Schnabel finds this a clear hint that Paul’s family may have had some wealth. It is possible that his family was well-connected among the aristocracy in Jerusalem, permitting them to obtain the services of Gamaliel as a teacher for the young Paul.  Perhaps he was on the fast-track to leadership in the Sanhedrin, explaining why he had access to the High Priest when he wanted to persecute believers in Damascus.

One key bit of evidence is that Paul sponsored a vow in Acts 21.  The Nazarite vow was a Jewish tradition that was supposed to be a deeply spiritual exercise.  To sponsor such a vow would be an indication of Jewish loyalty and fidelity to the Law.  For example, Agrippa I sponsored vows for several young men in order to show his personal loyalty to the law (Josephus, Antiq. 19.294).  Since the expenses for the vow itself could be high, wealthy men could show their support by paying the expenses for one or more men completing their vow. While it is possible Paul took this money from the collection he delivered to Jerusalem, that is not stated in the text.  In any case, taking money intended for the poor in Jerusalem to sponsor the vow does not seem appropriate, the money ought to be come form Paul’s own pocket.

To what extent does Paul’s wealth effect the way he did ministry?  Modern evangelism is often targeted on the “down and out,” people who on the fringes of society.  This is very much like Jesus, and perhaps Peter in Act 9.  Did Paul target wealthy, higher class people (ie., Roman citizens) because he was a wealthy Roman citizen?