It is common for a modern reader of the New Testament to read their spiritual experience into the earliest Jesus followers. But words like conversion, baptism, and church have modern nuances of meaning which are sometimes quite different than the first century. For example, as the early Jesus movement moved away from Jerusalem and into the Roman world, evangelists reached out to Gentiles; Roman pagans who worshiped both local gods and imperial deities. Duff compares the ancient context of the New Testament to an alien, foreign environment (241). 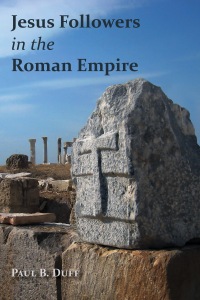 What would the Roman culture think when someone joined a Christian community? Since Christians worshiped Jesus exclusively, they rejected family and local gods. As Duff explains, what we call “conversion” would be seen by the Romans as a “deserting ancestral traditions as a defection from ancestral customs for foreign laws” (115-6). By accepting the gospel of Jesus Christ these “converted pagans” were challenging accepted cultural values and they put themselves in mortal danger.

Paul Duff’s Jesus Followers in the Roman Empire attempts to set the Jesus movement into the context of the ancient world. This book sets some of his previous more technical work on the churches in Revelation, Who Rides the Beast? Prophetic Rivalry and the Rhetoric of Crisis in the Churches of the Apocalypse (Oxford 2001) and his recent Moses in Corinth: The Apologetic Context of 2 Corinthians 3 (NovTSup 159; Brill 2015) into a more popular form.

In the first section of the book, Duff begins with a survey of the three competing worldviews in which the Jesus movement developed. Chapter 1 sets the stage by tracing the Hellenization of Judea and the rise of Roman power after 63 B.C. In some ways Jews were open to Greek culture, but reacted strongly against the attempt to force Jews to Hellenize by Antiochus IV Epiphanes. Having set this context, Duff then gives a short account of the Jesus movement and the “quest for the historical Jesus.” He correctly observes “that all of Jesus’s teaching and actions were performed in a Jewish context” (63) and that the claim Jesus was the Messiah can be traced to Jesus’s own teaching (67). Duff then moves to the development of the movement after the resurrection (although what the disciples of Jesus actually experienced is unclear to Duff (70). He is suspicious of using Acts as a historical source since he dates the book late, written A.D. 80-120 (68) and contains “novelistic interpretations” (74).  Duff observes that Paul did not focus on the Kingdom of God as the other Jesus followers did, preferring to call Jesus Lord or Son of God (75).

Chapter 3 traces the movement from idols to the true God. Although Duff is doubtful about the historicity of the book of Acts (101), Acts 14 as a model for understanding paganism and the gods. (Duff defends his use of the term pagan in his introduction.) In the Roman world, there were many gods and those gods were like humans and occasionally interacted with people (90). Sometimes this interaction was good, and humans might cajole a god into acting on their behalf through worship and sacrifice. That Paul and Barnabas could be gods was a real possibility for the people of Lystra in Acts 14. Paul’s sermon in Acts 14 is significant since he declares he worships the “living and true” God (as opposed to the not-living and false gods of the pagan world). Thus God’s wrath is coming on all people and he will judge the world through his son, “whom he raised from the dead.” By accepting the message of Jesus even the pagans can escape this coming wrath.

This preaching was attractive to some pagans and they not only listened to the message Paul preached, but accepted it and turned from false idols to the living God (1 Thess 1:9-10). What was it in Paul’s preaching that was compelling to the Greco-Roman world? There were people throughout the empire who were already attracted to Judaism (the God Fearers like Cornelius in Acts 10) and perhaps others who were attracted to Judaism without making a commitment. For Duff, Paul was an “itinerant Judean religious expert” (136) who used the Hebrew Scripture and worked miracles in order to reach people who were already interested in religions from the “mysterious east.”

Duff uses Paul’s statement in Galatians 3:28 to describe the earliest churches in the pagan world. Paul’s ideal church was “neither Jew nor Greek, male nor female, slave nor free.” The earliest Jesus movement was a family in which women played a significant role. Similarly, Paul’s churches had a place for women as well. He surveys the list of women who Paul specifically mentions in this letters (Phoebe, Chloe, Priscilla, etc.) Duff dismisses 1 Corinthians 14:34-35 as an interpolation, although he does not argue this point (162) and does not think Paul wrote the Pastoral Epistles, so 1 Timothy 2:11-12 does not represent Paul’s churches (166-7). Although there were a few wealthy members, the earliest Christians were from fairly low economic and social status (192).

The third section of the book is a pair of chapters treating the accommodations the Jesus movement made as well as the resistance to the Empire. By committing themselves to the exclusive worship of Jesus, new Christians severed ties with the culture in which they lived. Duff compares early churches with voluntary associations in the Roman world. Like a local house church, these associates met regularly and often had sacred rituals and moral expectations. Baptism and the Lord’s Supper have parallels with these associations, but the worship of Jesus as Lord sets the early church apart from any pagan counterpart (207).

Gentiles in Paul’s churches would have been under enormous pressure to participate in civic life, including festivals dedicated to various gods. In chapter 8 Duff describes some of these civic festivals or sacred meals at temples. Could a Christian attend a birthday celebration for a family member if the meal was hosted at a local temple? Modern readers are often confused by the issue of eating meat sacrificed to idols in the New Testament, including Acts, Paul’s letters and the book of Revelation. Marriage to a non-believer was also a complicated issue, as 1 Corinthians 7 makes clear. Both controversies continue well into the second century; Duff cites Justin Martyr’s Dialogue with Trypho and Tertullian as an examples.

Conclusion. Duff succeeds in his goal of immersing the reader in the ancient world, teasing out the implications living in the Greco-Roman world for the early Jesus movement. In a study such as this I would have expected more on the Imperial Cult (only a few pages, 86-88). In addition, there is little on Paul’s view of the Empire (was Paul anti-imperial?) Since Duff is skeptical of the book of Acts, he does not make much used of Paul’s activity in Ephesus in Acts 19 or the challenge of the Gospel to the cult of Artemis. Nevertheless, Jesus Followers in the Roman Empire is a valuable introduction to the study of early Christianity.

3 thoughts on “Book Review: Paul B. Duff, Jesus Followers in the Roman Empire”