Marvin Pate’s contribution to Kregel’s Handbooks for New Testament Exegesis series joins John D. Harvey on the Pauline literature and Herbert W. Bateman on the General Letters (David Turner’s contribution on the Gospels and Acts is still in preparation). In many ways this exegetical guide is a companion to Richard Taylor’s Interpreting Apocalyptic Literature (Kregel 2016), although the two books often cover the same material. Pate has written and edited several books on eschatology and Revelation including Four Views of Revelation (Zondervan, 1998), Deliverance Now and Not Yet: The New Testament and the Great Tribulation (with Douglas Kennard; Peter Lang, 2004). Reading Revelation: Four Interpretive Approaches to the Apocalypse (Kregel, 2009), and The Writings of John (Zondervan, 2010). Occasionally Pate refers the reader to these works for detailed arguments when the format of the Exegetical Handbook series limits his discussion of a topic. 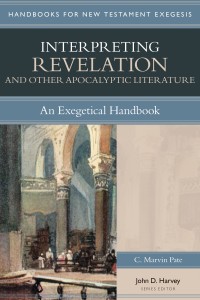 In the Four Views of Revelation he edited in 1998, Pate identified as a “modified futurist” and progressive dispensationalist. In his section of the four views book, Pate embraced the already/not yet approach to eschatology made popular by George Ladd. In short, this is the idea some elements of prophecy concerning the kingdom are already fulfilled in the work of Jesus, such as the initiation of the new covenant and the outpouring of the Holy Spirit. Yet others aspects of prophecies are not yet fulfilled, primarily establishment of a kingdom after the coming of the Messiah.

In this book some 20 years later, Pate still uses the already/not yet rubric for understanding Jesus’s eschatology in the Olivet Discourse (see his 40 Questions about the History Jesus) and his interpretation of Revelation, but he does not identify with any form of dispensationalism in this book. He is fair to “classic dispensationalism” in the Scofield tradition, but prefers an eclectic approach (p. 147). In general he expresses solidly conservative views and certainly expects a real return of Christ in the future, but he does not engage in any of the strange applications of Revelation associated with older forms of dispensationalism.

The first three chapters of this handbook defines apocalyptic and offers an overview of the development of the genre from the Old Testament through the Second Temple Period. He begins with the 1979 SBL definition of apocalyptic. This is more or less the standard definition in scholarship today, but John Collins revisited this definition in 2009 and offered additional nuances of the statement (the essay appears as the first chapter of his Apocalypse, Prophecy, and Pseudepigraphy, Eerdmans, 2015). As most scholars who study apocalyptic observe, this literature often blends several genres in a given book. Pate correctly observes the particular apocalyptic found in Daniel and Revelation are mixed genres: Daniel has court-tales (Dan 1-6) and apocalyptic visions (Dan 7-12); Revelation has letters, throne room visions, and apocalyptic.

Pate surveys the development of apocalyptic beginning in the Old Testament (Isaiah 24-27; 55-56, Joel 2-3, Ezekiel 38-39, Daniel and Zechariah). Since he considers Isaiah a unified book from the eighth century prophet, the “little apocalypse” in Isaiah 24-27 is indeed an early development. Most scholars of Isaiah today consider those chapters to be one of the later additions to the book. Other than Revelation, the main New Testament example of apocalyptic is Jesus’s Olivet Discourse. Pate does a remarkable job illustrating the parallels between the Olivet Discourse and the opening of the seven seals in Revelation 6. Although this is often suggested, few have worked out the detailed parallelism quite like Pate does.

The third chapter of this handbook sketches what Pate calls the “function of apocalyptic.” The general themes of Israel’s history are based on the blessing and cursing found in the Law (especially Deuteronomy).  Because Israel failed to keep the covenant, they fell under the curse of the Law and were eventually exiled from their land. But the covenant also promised a restoration to the land in the future. Pate then demonstrates how this “sin, exile, restoration” pattern resonates throughout both biblical and non-biblical apocalyptic literature. This include the messianic woes, a time of great tribulation prior to the arrival of the kingdom. In fact, this hope of future restoration often drives the apocalyptic reimagining of history in 1 Enoch, 2 Baruch and 4 Ezra.

One of the most fascinating sections of his book is Pate’s use of the Arch of Titus as a model for the book of Revelation. He suggests much of the structure of Revelation can be explained as an ekphrasis. Ekphrasis is a literary description of a piece of art, drawing the picture in the mind of a reader using words. The image of the Great Whore of Babylon in Revelation 17 is a clear example of this literary style. Pate has an extended discussion of the art on the Arch of Titus which he then relates to Revelation 4-19. As far as I know, this has not been suggested before and it is quite intriguing. Since Revelation has at least one other example of this style, it is at least possible John modeled at least some of his imagery on a Roman Triumph and certainly the images of Titus as the conqueror of Judea would resonate with the themes of the book. One possible problem with the suggestion (and it is only a suggestion in this book) is whether the specific images Pate refers to were known well enough to people living in Ephesus about twenty years later. With the Great Whore, the image of Dea Roma was known in imperial cult sites and on coinage. Were there replicas of the Arch of Titus placed in imperial cult centers? Could images from the Arch be distributed elsewhere in the Empire so that readers would catch on to the allusion?

As with all of the volumes in this series, Pate devotes two chapters to preaching apocalyptic literature (ch. 7-8). With respect to application, Pate discusses four issues of “twenty-first century appropriation” of Revelation, the first three are responses to misuse of apocalyptic at the theological level. First, he discusses the long delay of the return of Christ, which he answers by appealing to the already/not yet method explained elsewhere in the book. The Revelation does ague for an imminent return, but that means “any time, not ‘immediate’” (p. 179.

Second, Pate addresses the formation of Israel as a nation in 1948. This date has long fascinated prophecy teachers who have made the unfortunate claim the new political entity Israel is the fulfillment of prophecy. Since Jesus says “this generation will not pass away” in the Olivet discourse (Matt 24:34), some claimed 1948 started the prophetic clock and a literal generation would pass before the Rapture or Second Coming (1981, 1988, etc.). Pate offers five alternatives for understanding “this generation.” He leans towards the view this “generation” refers to the last generation before Christ returns, whenever that is.

Third, Pate deals with the theological question of the status of Israel in the present age. Does the church “replace Israel” as God’s chosen people in God’s plan? Using the 144,000 in Revelation 7, Pate argues Israel has not been replaced as God’s people. This group represents the “Jewish remnant that already accepted Jesus as their Messiah in the first century” and the larger multitude are the Gentiles who have not yet accepted Jesus as Messiah (the already/not yet hermeneutic).

The section on preaching apocalyptic is missing two items I would have appreciated. First, I would like to hear Pate’s advice on what NOT to preach in this literature. Preaching through Revelation 1-3 works well, and the throne visions in 4-5 lend themselves to a sermon. But is it possible to preach through Revelation 8-9 in a series of expositional sermons in a way that is faithful to the text and applicable to a modern congregation? Can a pastor preach the Great Whore of Babylon (Rev 17) in a way that “bridges the gap” between the Roman world of the late first century and modern American Christianity? My second criticism of this section of the book is the two texts Pate chose to model an expositional method for preaching apocalyptic: Romans 11:25-27 and 2 Thessalonians 2:6-7. At least one example sermon should have been drawn from Revelation (the topic of this book). In fact, one sermon from the Seven Churches and one from a later chapter would have been a more appropriate model given the title and themes of the book. At the end of the book I am left wondering, “How do I preach Revelation?”

The final chapter of the book is a list of exegetical tools for biblical interpretation and resources for apocalyptic literature. The first three pages are general tools (including a full page on textual criticism!). With the exception of his own work, there are few items on this list from the last 15 years. This list would benefit by reducing space devoted to general studies, expanding the apocalyptic section with recent important work, and annotating the entries.

Conclusion. Like the other volumes in this series, Pate’s book is a useful overview of a very difficult genre to interpret. I find many of the charts difficult to navigate, perhaps the information would have been better communicated without forcing it into a rigid box format. 1-2 Thessalonians are on the front cover of the book, but really only appear as one of the two examples of preaching apocalyptic. Aside from these criticisms, the first three chapters of this book are worthy reading for an introduction to apocalyptic literature. Pate’s discussion of Revelation 6 and the Olivet Discourse and the Arch of Titus are excellent and worthy of attention.

NB: Thanks to Kregel Academic for kindly providing me with a review copy of this book. This did not influence my thoughts regarding the work.

Reviews of previous volumes in this series: