After Paul established the church at Corinth (Acts 18:1-17), he remained for 18 months before traveling to Ephesus. He will spend three years in Ephesus, although he appears to have done ministry in Troas as well as planting several churches around the Lycus Valley supported by the Ephesian churches.

From Ephesus, he wrote at least one letter which is now lost (1 Cor 5:9, possibly embedded in 2 Cor 6:14-7:1). After hearing reports of divisions and other sins in the church and also receiving a letter from the church with a number of questions, Paul writes a second letter, 1 Corinthians. Paul sends another “severe letter,” probably lost to us and delivered by Titus (2 Cor 12:18). This letter appears to have upset the Corinthian believers and even angered some of them. 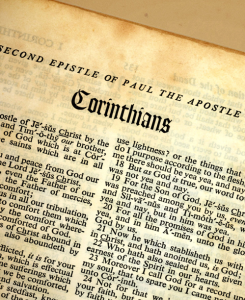 Timothy had been sent to Corinth to “to remind you of my ways in Christ, as I teach them everywhere in every church” (1 Cor 4:14, cf. 16:10). Instead of accepting Timothy as Paul’s personal representative, the church attacks Paul and Timothy is not able to handle the attack so he returns to Ephesus to report to Paul. After hearing from Timothy, Paul makes a “painful visit” to the church (2 Cor 2:1). This is not found in Acts, although Paul spends three years in Ephesus so there is plenty of time for visits to Corinth. This “painful visit” goes very badly and Paul returns to Ephesus angry and humiliated.

After this painful visit he writes another “tearful letter,” which is either lost or embedded in 2 Cor 10-13. During his time in Ephesus Paul faced some persecution and was faced with the possibility of death. This was likely an arrest and imprisonment, although there are no details in the book of Acts (2 Cor 7:8–9).

Titus intended to leave Corinth and meet Paul in Troas, where Paul is preaching at the time. They cannot find one another. Paul therefore does not know what the situation is in Corinth, causing further anxiety (2 Cor 2:12–13). When Paul and Titus finally meet, Paul learns the church dealt with their factions and desires to be reconciled with Paul (2 Cor 7:6-16).

Now that Paul has a better understanding of the situation in Corinth, he writes 2 Corinthians to deal with any remaining barriers to reconciliation with the church. (Martin, 37 suggests the autumn of A.D. 55, from Macedonia, prior to his return to Jerusalem to deliver the collection). It is possible the first nine chapters were written (and sent?) before Paul hears there is still some opposition in the church, chapters 10-13 target the teachers in the Corinthian church who are directly opposing Paul’s authority. The letter is delivered by Titus and two other brothers who are to take care of the collection before Paul arrives.

When Paul finally returns to Corinth he spends three months with the church (Acts 20:2-3). During this time he likely wrote the book of Romans.

This rather complicated story is an attempt to “read between the lines” and sort out several letters (which we do not have) and visits (which Acts does not report). To a certain extent this is speculative, but it is the traditional view of the relationship between Paul and this particularly difficult church.

As Garland points out that the Corinthians “were not yet comfortable in living out the scandal of the cross” (2 Corinthians, 31). The fact of Paul’s suffering and the possibility they too might suffer was troubling for the Gentiles who had converted to Christ.

11 thoughts on “What Happened between First and Second Corinthians?”