The Testament of Solomon begins with the story of a demon named Ornias who stole wages from a worker building the Temple and then sucked the thumb of a man’s son, sapping his strength. Solomon interrogates the boy and discovers the demon’s activities. Solomon prays to the Lord for help, and Michael gives him a ring through which he can imprison demons. He gives the ring to the boy and traps the demon. The boy turns the demon over to Solomon. The demon is brought to the throne of Solomon. Solomon asks him where he lives and he answers with a reference to the zodiac. He mentions he was once thwarted by the archangel Ouriel. Solomon prays to this angel, who comes and commands the demon to cut stones to help finish the temple. Ornias is given the ring and told to bring the prince of demons to Solomon. What follows is a list of demon names and a suggested method for exorcising the demon.

The rest of the book is a series of interrogations. Ornias brings a demon before Solomon, the demon is named, briefly described and then gives the way he might be thwarted. This usually involves invoking a powerful name, such as an angel or Jesus.Ornias goes to Beelzeboul and captures him with the ring. Solomon questions the prince of demons closely. Solomon asks Beelzeboul if there are female demons. He shows one to Solomon, Onoskelis, a beautiful woman who had the legs of a mule. Solomon questions here about her origin and activities and then commands her to spin hemp into ropes.

Chapter 5: Solomon commands Asmodeus to be brought to him, whom he also questions. He explains his origins and activities (marring the beauty of virgins and causing murders), and he explains that the angel Raphael caused him to go away by burning the liver and gall of a sheatfish (a large catfish, cf. Tobit 6:2 for this method of exorcism). Asmodeus is command to mold clay into vessels for the temple.

Chapter 6: Solomon begins to question Beelzeboul again. Beelzeboul “holds in his power the race of those bound by me in Tartarus. He is being nurtured in the Red Sea; when he is ready, he will come in triumph.” He tells Solomon he can be thwarted by several names, Eloi-I causes him to tremble and disappear. Solomon commanded this demon to cut marble for the temple.

Chapter 7: Solomon interrogates Lix Tetrax, the demon of the winds. The name Lix Tetrax appears on a tablet from Crete and is associated with Ephesian magical texts. This is a “blast demons” sometimes found Aramaic incantation texts. The demon explains his origins and activities (whirlwinds and divisions), and tells Solomon three names which will cast him out (including the name of the archangel Azael). He is forced to raise stones for the Temple.

Chapter 8: Solomon interrogates the seven stars of heaven, Deception, Strife, Fate, Distress, Error, Power, and “The Worst.” Their activities are fairly self-explanatory, but Error says “I am Error, King Solomon, and I am leading you into error, and I led you into error when I made you kill your brothers.” This refers to Solomon’s execution of his brother Adonijah (1 Kings 2:25).  Solomon commanded them to dig the foundation of the Temple.

Chapter 9: Solomon interrogates a demon called Murder, who is all limbs and no head. He claims “When infants are ten days old, and if one cries during the night, I become a spirit and I rush in and attack (the infant) through his voice” (9.5). He can only be stopped by a flash of lighting.

Chapter 10: Solomon interrogates a demon called Scepter, who was in the form of a gigantic dog.  This demon says “I deceive men who follow my star closely and I lead (them) into stupidity.” This demon helps Solomon obtain an emerald for the Temple. 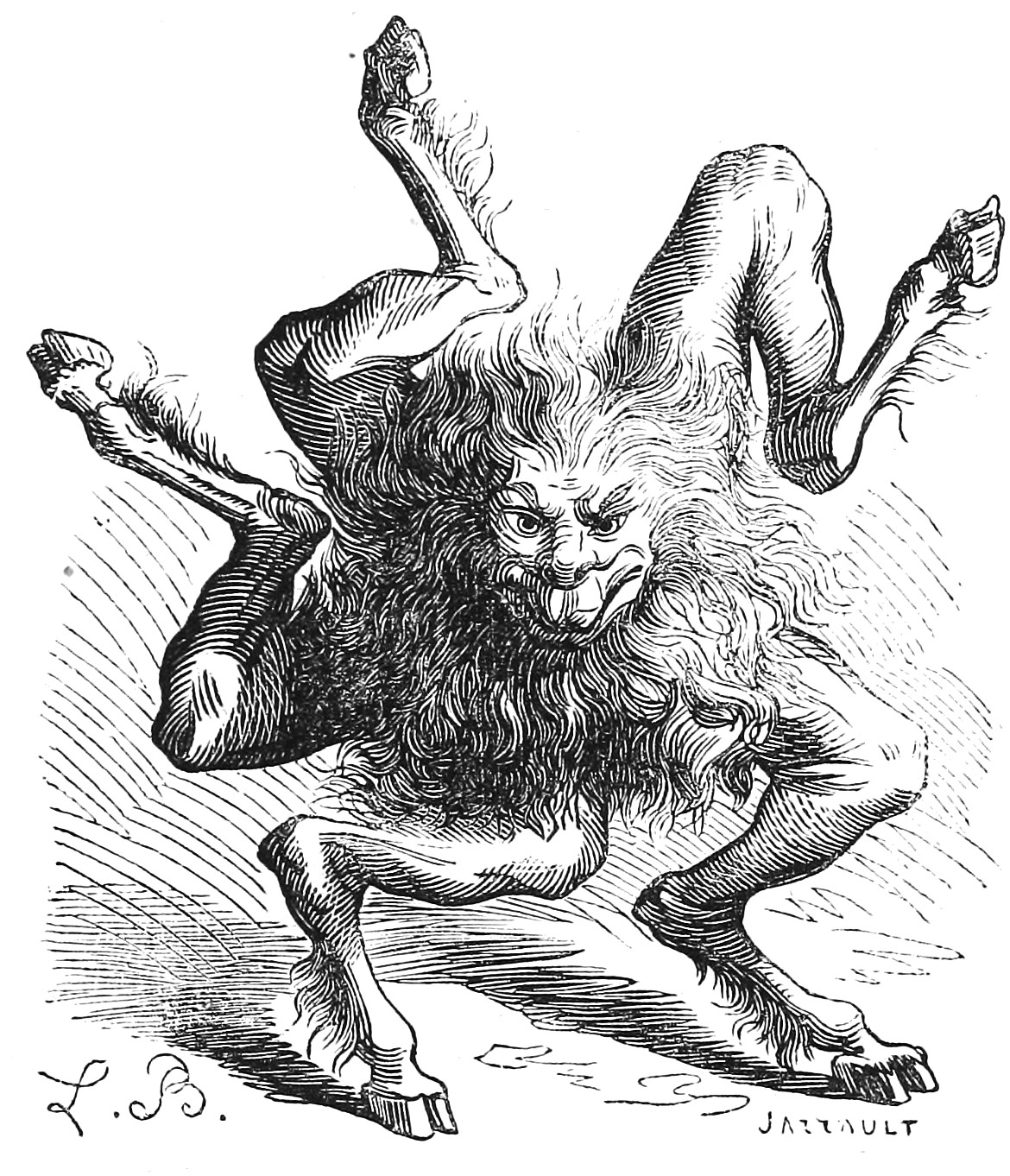 Chapter 11: Solomon interrogates a demon called “the Lion-Shaped Demon” who has a legion of demons under him. This demon “who sneaks in and watches over all who are lying ill with a disease and I make it impossible for man to recover from his taint” (11.2).

Chapter 12: Solomon interrogates a three-headed dragon demon who can be thwarted by the “place of the skull,” an allusion to the crucifixion. He is ordered to make bricks for the temple.

Chapter 13: Solomon interrogates Obyzouth, a female demon with disheveled hair. Disheveled hair evokes Medusa, guardian goddess of Aphrodite, but demons with wild hair also appears in Revelation 9:8. Obyzouth travels all night looking for women giving birth in order to make them strangle their baby. The angel Raphael thwarts her by writing her name on a papyri.

Chapter 14: Solomon interrogates a demon called “the so-called Winged Demon.” This demon performs perverse acts in the night and sometimes copulates with beautiful women “through their buttocks.” He is countered by an angel in the second heaven named Bazazath, a name only appearing here in the pseudepigrapha. He is forced to cut marble for the temple.

Chapter 15: Solomon interrogates a demon called Enepsigos. This female demon has countless names and can be conjured in many forms (including Kronos). The angel Rathanael can thwart her, but the Temple cannot hold her. Solomon inquires of the angel Rathanael and he is told he needs to use the seal of God. This angel prophesies to Solomon that his kingdom will be divided and the Temple will be destroyed until the Son of God comes and is stretched out on the cross.

Chapter 16: Solomon interrogates a demon called Kunopegos, a spirit in the shape of a horse in front and a fish in back (a sea-horse?).  He can change himself into a man and causes seasickness. In order to thwart this demon, one must go through a complicated ritual involving bowls and hemp ropes. Solomon sealed him with his ring and stored the demon away in the temple.

Chapter 17: Solomon interrogates a shadowy demon with gleaming eyes. He has no name, he only identifies himself as a “lecherous” demon. He is thwarted if the name of the savior is written on his head.

Chapter 18: Solomon interrogates thirty-six heavenly bodies with heads like formless dogs. Their names are listed with their activity (headaches, sore throats and other physical ailments) and the way to cast them out. This lengthy (and obtuse) listing ends the “interview” section of the book.

As can be seen from this catalog, demons were associated with a wide variety of afflictions, from “perverse acts in the night” to Kourtael, who “sends forth colics into the bowels” (18.13). The interview section of the book is more or less a manual on casting out demons: match an affliction with the demon and then follow the instruction given in the text. This is the sort of thing the Sons of Sceva attempted in Acts 19, although they failed. The Testament also gives evidence of the association of illness and demonic activity.

9 thoughts on “Testament of Solomon: A Catalog of Demons”