The Testaments of the Twelve Patriarchs claim to be the final words of the sons of Jacob. Just as Jacob gave his final “testament” in Genesis 49, each of these Testaments claim to the last words of a patriarch to their sons. The genre of testament is common in the literature of the Second Temple period and there are many other “testaments,” yet there is no set pattern for the collection. Unlike the apocalypses, the testaments contain a number of elements with the “last words of a famous man” motif the only real common element. 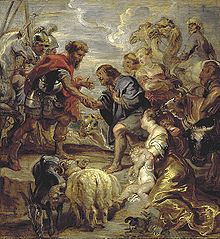 The Testament of the Twelve has been found in several translations, including an Aramaic fragment found among the Cairo Genizah documents in 1910 and at Qumran. This evidence implies the original language of the book was Aramaic, although R. H. Charles argued for a Hebrew original based on “mistranslations” of Semitic phrases in the Greek text.  H. C. Kee, on the other hand, argues the original was Greek based on terms for piety for which there are no real Hebrew equivalents (OTP 1:777).

The books have been dated as early as 250 B.C. based on similarities to the Septuagint, but is seems more likely they come from the Maccabean period. For example, T. Levi 18:2 is often taken as a reference to John Hyrcanus (137-107 B.C.) Craig Evans is more specific in identifying date and authorship: the Testaments “were written between 109 and 106 B.C. E. by a Pharisee who greatly admired John Hyrcanus at the zenith of the Maccabean (or Hasmonean) dynasty” (Ancient Texts, 40). Since many fragments of the books are found at Qumran, a mid- to late-second century B.C. date seems plausible.

As with any of this literature, we must also deal with the probability there are Christian interpolations in the text. These are especially problematic when the text refers to the Messiah. Kee estimates ten of these are Christian. For example, T.Levi 4:1, 14:2, both referring to violence towards the Son and refer to him as “savior of the world.” It is sometimes difficult to separate what is “too Christian” from what is representative of a developing Jewish worldview from which Christianity also developed in the first century. Marinus de Jonge, for example, argued the Testaments were entirely Christian, with some Jewish material at the core (Marinus De Jonge, Studies On The Testaments Of The Twelve Patriarchs: Text And Interpretation [Leiden: Brill, 1975]). The most obvious problem will be messianic prophecies in the “apocalyptic” portions of the Testaments. Some of these will be consistent with the Old Testament and other pseudepigrapha, others will show a clear Christian influence. Both have value for understanding the New Testament and the development of a distinct Christian eschatology, but it is critically important not to mix the Christian with the Jewish.

These books contain ethical admonitions which are akin to the wisdom literature. An elder giving instruction to his children is quite in keeping with Proverbs, for example. Each of the books has a general ethical theme built around the experience of the patriarch. In T.Reuben 3:11-15, for example, Reuben explains his sin against Jacob as a warning against lust. T.Simeon deals with envy and jealousy. Most of the Testaments include a mini-apocalypse. T. Levi contains visionary experience which is more akin to apocalyptic than the other testaments, but the thrust of the book is still ethical. In chapter 13, for example, the writer admonishes his children to “fear the Lord with a whole heart.” The Testaments refer to the Book of Enoch several times, indicating the influence of the apocalyptic text on later Jewish writings (T.Rub. 5:6, T.Sim 5:4, T.Levi 14:1, T.Jud 18:1, T. Dan 5:6, T.Naph 4:1, T.Ben 9:1).

These testaments use the story of Joseph in Genesis as a general framework around which they build their ethical teaching. As such these elements are “expansions” of biblical material (as with Susanna, Bel and the Dragon, the additions to Esther, etc.) The brothers repent of the foolish things they did in the biblical story (T.Rub. 3). Joseph is praised highly (T.Sim. 5, “nothing evil resided in Joseph, cf. Tobit, who is praised in similar ways as a super-righteous model for Jews in the Diaspora).

The expansions necessarily become more imaginative for the brothers who are not featured in an Old Testament story (Issachar, for example). Most of the Testaments have a death notice and a reference to the burial of the patriarch, often in a coffin as Joseph in Gen. 50:22-26. Judah is an exception, he does not wish to be buried like a rich man, and is buried in Hebron “with his fathers.” In T.Sim. 8 there is a tradition that the wizards of Egypt knew Joseph would depart Egypt when there was a great plague and darkness in the land. This is a “prediction” of the plague of darkness (Ex. 10:21-23) and the death of the firstborn in (Ex. 11:1-10).

The value of the Testaments for New Testament studies is twofold. First, the ethical sections provide a backdrop for the ethical teaching found in the Gospels and in the Pauline letters. Just as the Testaments deal with ethical problems of Jews living in a pagan world, Paul often deals with the problem of Christian ethics in a pagan environment.  It is something of a surprise to find less parallels to the ethical content of the Gospels (especially the Sermon on the Mount) than the Pauline literature. For a brief recent review of potential Pauline parallels to first century Judaism, see Udo Schnelle, Apostle Paul: His Life and Theology, (Grand Rapids: Baker, 2005), 70-75.

A second element of this literature which is important for New Testament studies is to be found in the various apocalyptic sections. Of first importance here is T.Levi, but each of the testaments have a mini-apocalypse which contributes to the overall-eschatology of the Testament of the Twelve.

4 thoughts on “What are the Testaments of the Twelve Patriarchs?”