The Apocalypse of Elijah is not strictly speaking an apocalypse. It is strongly influenced by the book of Revelation, especially 11:1-12 (the appearance of two witnesses in Jerusalem). There are dozens of possible ways to interpret the two witnesses, from literal people (Elijah and Moses, Elijah and Enoch) to figurative (the Old and New Testament, two volcanoes, etc.) The book does not contain any of the sorts of things we expect in a true apocalypse: heavenly journeys, thinly veiled reviews of history, revelation of mysterious secret knowledge, or angelic guides. Coptic translations of a Greek original of the Apocalypse date to the fourth century. The book is clearly dependent on Revelation and appears to quote 1 John 2:18. A date of the mid-second century seems probable (OTP 1:730). If the book was a Christian re-working of a Jewish original, then some material may be still older (There is a Hebrew Apocalypse of Elijah which may stand in the background of the book, but no one has systematically studied the possibility of a Hebrew to Greek to Coptic translation). The book may reflect an Egyptian Christianity, but this is far from clear. 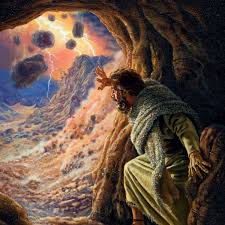 The Apocalypse of Elijah is of interest to the study of New Testament eschatology since there are various interpretations and extensions of key eschatological vocabulary, such as Antichrist and the kingdom. There is a strong martyrdom theme in the book, especially in the fourth chapter.

The word of the Lord comes to Elijah and confronts him over love of the word (chapters 1-2). This verse is roughly the same and 1 John 2:15, but it is not an exact quote. Since the subject matter is common there is no reason to assume the writer of this Apocalypse knew 1 John.

The God of Glory has had mercy on his people in the past and at the present time he has come as a man to save us from sin (3-7). This text says God did not inform anyone of his plan to become incarnate and says God “changed himself into a man.” This is a fairly underdeveloped Christology and does not seem to be aware of any later Trinitarian thinking. God will preserve his people from the man of lawlessness, the term used by Paul in 2 Thessalonians 2 for the antichrist of popular apocalypses. The writer may have been aware of Paul, but the term is general enough that it may have been a common way of describing the apocalyptic oppressor.

The sinners will pass on to “thrones of death” because they have “alienated themselves” from God (8-12). In the last days there will be deceivers who teach false doctrine and “make God their belly” (13-14), a very similar description of the last days as found in 2 Tim 4:1-5 and the false teachers Paul addresses in Philippians (3:19 especially.)  Fasting is of importance to our writer – God ordained the fast because it purifies the heart and hands, heals disease and casts out demons (15-22). Related to the fast is double-mindedness in prayer (23-27). The person who is double-minded in prayer is “darkness to himself.”

Chapter 2 concerns the “kings of Assyria and the dissolution of the heaven and the earth (1). From the west a “king of peace” will arise, but he will in fact be a man of injustice and will take vengeance on Egypt with much bloodshed (2-16). While he is never directly called the Antichrist, this king of peace is modeled after the great Antichrist figures of the past (Antiochus IV Epiphanies for example). That an antichrist-like character will arise out of the east is common in the Sibylline Oracles, which play on the Nero-Myth. Note also Revelation 8 describes a demonic army crossing from the east; the river Euphrates is dried up in order to give the east access to the west.

He commands peace but will appoint priests and establish idols, even commanding that the wise be seized.  The writer gives us some “signs” so that we will know who the king of peace is when he comes (17-28). The material in 17-28 only appears in a recently published manuscript from the Chester Beatty library (OTP 1:741, note e2). Elijah weeps for Egypt which will bear the brunt of the attack of this king of peace (29-38). The days will be so bad people will beg the rocks to fall on them and kill them, but they will not die (33-34, cf. Rev 6:16). Nursing women will be forced to suckle snakes and blood will be drawn from their breasts (35-36). Verses 39-41 are fragmentary, but appear to have described the return of the Jews to Jerusalem. The Assyrians and Persians will fight a war in those days (42-50), and the whole land will hail the Persians. At the end of this time there will be peace and prosperity and the dead will rise (51-53). Curiously, no royal matter will be allowed to be brought for three and a half years. Typically the “time, times and half a time” period from Daniel is the duration of persecution, the reign of an antichrist, etc. This is one of the few direct references to this three and a half year period in the pseudepigrapha.