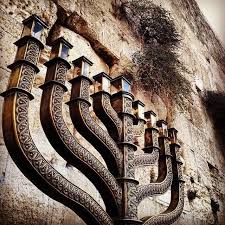 In New Testament studies it is somewhat commonplace to say the Jews at the time of Jesus were expecting a messiah who was a military leader or a Davidic king. In popular preaching this is usually stated without any sort of evidence. There is some reason to think at least some Jewish people in the first century had this view of the messiah, although it was not the only way to think about the messiah in the first century.

This semester I have been teaching a class on the Second Temple period as well as a series of Bible studies in the Gospel of Mark. When I was preparing to teach Mark 10:32-34 for this week, I ran across a potential allusion to the military activity of Judas Maccabees in the Gospel of Mark. I am sure someone what noticed this before, but let me offer this as an illustration of how reading Second Temple period literature helps to illuminate the New Testament.

In Mark 10:32, Jesus is “going before” his disciples. Mark makes it clear Jesus is leading the way up to Jerusalem. Although Jesus has traveled with his disciples in previous stories, this is the first time he has been described as “going before” them. The word is occasionally used to described a military maneuver (2 Macc 11:10), but with the sense of advancing in a battle rather than to describe a general leading his army into battle.

The verb (προάγω) appears in a very important Second Temple text in 2 Maccabees 10:1, Judas Maccabees and his followers up to Jerusalem to recover the Temple after Antiochus had desecrated it. But the writer of 2 Maccabees says it was the Lord himself who was leading them up to the temple (a participle of προάγω, προάγοντος αὐτοὺς).

2 Maccabees 10:1–2 (NRSV) Now Maccabeus and his followers, the Lord leading them on, recovered the temple and the city; 2 they tore down the altars that had been built in the public square by the foreigners, and also destroyed the sacred precincts.

Mark may be intentionally presenting Jesus as acting like Judas Maccabees. For the first time in the Gospel of Mark Jesus is going up to Jerusalem and Jesus himself is leading the way. Before he arrives he will be hailed as the son of David (10:47) and welcomed as the one who comes in the name of the Lord (11:9). The next pericope in Mark begins with the curse of the fig tree (11:12-14) followed by the Temple action (11:15-19). Although the Temple action is symbolic, Jesus is driving out those who are not using the Temple properly. Again, popular preaching calls this a “cleansing of the Temple” even if that word is not used in Mark 11.

This connection of Judas Maccabees may also explains the amazement and the fear of the other followers of Jesus. Perhaps the disciples are amazed that Jesus is leading the way to Jerusalem in this way. Since James and John ask to sit on the right and left hand when “Jesus comes in his glory” (10:37), it is possible the disciples think this is the time the Kingdom will be restored to Israel.