The book of Tobit is, on the face of it, a fairy-tale about a young man, Tobias, who goes out into the wide world, encounters many dangers, but is under the protection of the Heavenly Powers and returns with great riches and with Sarah, his wife, with whom he lives happily ever after. Benedikt Otzen 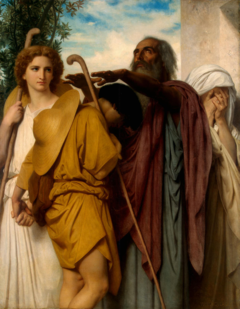 Tobit was written in either Hebrew or Aramaic, there dozens of fragments from five manuscripts found at Qumran. Little can be said of the author other than the fact he was likely a diaspora Jew. The book is difficult to date, but since there is no reference to the Maccabean revolt, but if the provenance of the book is outside of Judah then it is possible the author was not particularly concerned with the problems of living according to the Law in Jerusalem. Carey therefore gives a range of dates from 300 to 100 B. C. (ABD 6:1358).

Often studies on Tobit focus on two well-known literary features. First, the “Grateful Dead” motif refers to a character who does some kindness for the dead. The dead then reciprocate in some way. Tobit risks his own life and health to give the dead a proper burial, but this is not done in order to illicit a favor at all, he is simply performing a duty required by the Torah. In addition, it is not the dead who bless Tobit, but rather God (through the agency of an angelic being). If a Greco-Roman “Grateful Dead” motif is present it is adapted along Jewish lines since it is God who reward Tobit’s piety rather than the ghost of the dead person.

The second motif is the “The Poisonous Bride,” another common theme in the ancient literature.  In the story Sarah is married seven times, but her husband is killed by a demon before consummating the marriage. As with the “Grateful Dead,” this motif is fairly minor in the book of Tobit and cannot be considered the driving motif of the book.

A far more fertile ground for literary parallels is the Hebrew Bible, especially the patriarchal narrative. Tobias goes on a journey and obtains a wife, recalling Isaac and Rebekah (Gen 24) and Jacob (Gen 29). In both of these stories a member of Abraham’s family leaves the Land and journeys to a distant country, yet finds both extended family and the blessing of God through marriage. That Tobit is a righteous sufferer clearly recalls the book of Job. Even the complaints of Tobit’s wife are not unlike those of Job’s wife (Job 2:9-10). While Job is not a part of the Pentateuch, the story of Job was thought to be patriarchal.

Tobit seems to be drawing on the most ancient stories of the Jewish people in order to demonstrate to Diaspora Jews that God still works in the same way he always has even if his people have gone well beyond the Land of the Promise (Weitzman, 60). Like Daniel, Nehemiah, Modecai or Esther, Tobit is a righteous Diaspora Jew.

Is this a fair reading of Tobit? Is there anything else in the book which might support this view?

8 thoughts on “Tobit: A Faithful Israelite”