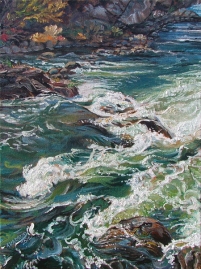 After the dark days, Baruch saw a last “bright waters” which indicate there will be “eternal peace on the throne of the kingdom” (Chapters 73-76). This is the messianic age when health will descend like dew and joy will encompass the earth. Wild animals will serve men and “asps and dragons” will subject themselves to a child. Those who work the fields will never tire because the produce will shoot out speedily.

Baruch responds to the vision and interpretation in prayer and worship (chapter 75) and he is instructed to wait forty days and he will depart from the earth (chapter 76). He assembles the people and explains to the (briefly) his vision and encourages them to hold to the law, since the reason Zion fell is the people forgot the law (chapter 77). The people understand this and request Baruch write a letter to the “brothers in Babylon” that they too may know this revelation from God. There is a little hint here of a difference between Jews in Jerusalem and Jews in the Diaspora. The Jerusalem Jews are concerned their brothers living far away keep the law and see their responsibility in ensuring the Jews in Babylon keep the Law correctly. Is this a hint at the problems between Palestine and Diaspora Jews in the pre-70 era discussed earlier?

Baruch writes a letter to the nine and a half tribes which are living in Babylon (chapters 78-87) explaining to them the Lord justly chastised the nation because they were unrighteous.  He reports what happened when Nebuchadnezzar invaded the city (79) and his vision of the angels around the city who allowed Nebuchadnezzar to take Zion itself (80). He gives them some word of consolation as well, that the Mighty One is a God of Grace and has shown him the “mysteries of the times and the coming periods” (81).

He describes the coming time of justice for God’s people when everything will be put right and the nation will be avenged (82-83). God is fair in all of his judgments, for “if he judges us not according to the multitude of his grace, woe to all us who are born” (84:11).  The youth of the world has passed away and the coming of the “times” is nearly here: the pitcher is full, the ship is near the harbor, etc. (85). When those days come he will purge the world of sin and destroy those who are polluted by sin (85:15).