This collection of essays is an introduction “anti-imperial” or “Empire Criticism” approaches to the New Testament from a decidedly Evangelical perspective. While these approaches have been around for a number of years, Evangelicals have been slow to interact with them.  This volume of essays is a step toward bringing some of the value of studying Empire to a more conservative audience. Since my review was too long for a single post, I will cover the first half of this book here, the second half is here. 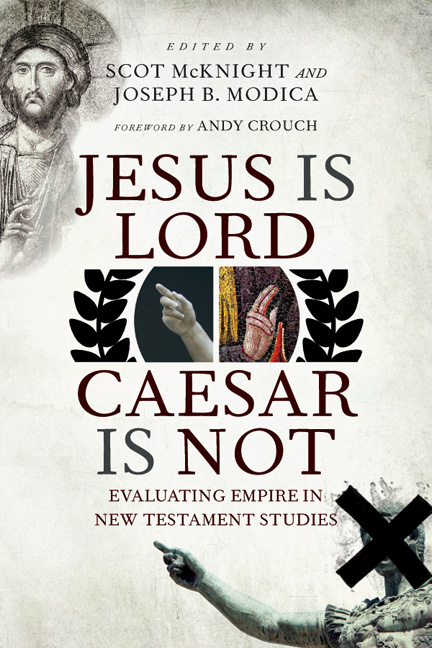 As McKnight and Modica comment in their introduction, one of the problems with some of the work done on anti-imperial rhetoric ends up sounding “too much like one’s personal, progressive, left-wing, Neo-Marxist, or whatever, politics” (19).  This sounds something like the standard criticism of the nineteenth century “lives of Jesus” movement; all of those studies turned Jesus into a nineteenth century Protestant German liberal. McKnight admits that Empire studies grew in popularity during the Bush administration and many were not-so-veiled attempts to criticize growing fears of an “American empire.”

But I could see how an ultra-conservative reader of this book in 2013 could easily import their own fears of a “big government” demanding complete loyalty. In fact, the Snowden NSA leaks occurred while I was reading this book, I had just re-read 1984 and Cory Doctrow’s Little Brother. It will be a simple matter for me to hear “anti-imperial rhetoric in the New Testament” as talking about “my government,” whether the current administration is left or right of the center. (On the other hand, I cannot imagine too many ultra-conservatives reading anti-imperialist approaches to the New Testament!)

But that is not the point of Jesus is Lord, and that is certainly not the value of Empire studies for understanding the New Testament writers. In my approach to the New Testament, context is everything, especially historical context.  Most Bible readers do not have a firm grasp of Roman history of the first century. Other than watching Gladiator or a vague memory of high school world civ classes, the Roman world is largely unknown.  For most Christian readers, the word “Lord” means Jesus and “Gospel” is “how I get saved.”  But in the Roman world of the first century, those words carry some political overtones that could be considered radical when applied to someone other than Caesar.

The first two chapters attempt to set the stage for the rest of the book.  In fact, these two chapters account for about one quarter of the total page count of the book.  In the first chapter, David Nystrom surveys Roman Imperial ideology and the Imperial cult. By the first century, the Roman empire was a vast, socially stratified entity that was thought to have been ordained by the gods themselves. Augustus used both patronage and religion to solidify his power base as emperor.  Worship of the idea of Rome and the emperor as a deity was common in the very regions where Pauline Christianity took root, Ephesus and the Asia Minor.

Judith Diehl’s contribution to the book is the longest, and in many ways the most satisfying.  She begins by surveying some of the same history as Nystrom, but then touches on the potentially anti-imperial elements of the Gospels, Acts and Paul.  In the second part of the chapter she describes several sub-disciplines that are often allied with Empire studies (for example, colonialism, social gospel, patronage, post-colonialism) and shows how these theoretical methods may shed some light on the text.  Certainly patronage is a major factor in the problems at Corinth, but even Paul’s description of the return of Jesus as parousia might be seen as a contrast to the glorious arrival of an Emperor. In the third section of the chapter Diehl surveys literary approaches that are often a major component of Empire studies.  She first describes how symbolism might be construed as subversive language and then gives a few examples of how this works.  The most obvious place to find symbolic language which is almost certainly subversive and anti-imperial is Revelation 18.  She calls apocalyptic “protest literature (73) and shows how “John creatively convinces his audience that there is only one authority in the world that is worth of human devotion and service, and it is not the Roman emperor” (76).

Three chapters are devoted to Empire Studies in the Gospels. First Joel Willitts interacts with David Sim (Apocalyptic Eschatology in Matthew) and the wealth of material produced by Warren Carter on Matthew.  Willits thinks these studies are valuable, but he thinks that ultimately they do not contribute much to the interpretation of the Gospel of Matthew.  Post-colonialism, for example, is not “a very reliable method for interpreting ancient texts” (93), it is the Jewish Scriptures [that] provided the larger story in which Matthew’s Jesus fits” (96).

Dean Pinter’s chapter on Empire in Luke asks two questions.  First, does the gospel of Luke indicate antagonism or rivalry toward the Empire? Despite the fact that Luke refers to Jesus as both Lord and king, he never actually creates an antithesis between the two (110). It is not as though Jesus is presented as an up-and-coming rival to the Roman Empire, but rather that Caesar is a rival to Jesus; it is Jesus that is the true Lord and Savior and Caesar is challenging his supremacy (111) What I found disorienting about this chapter is that the focus is solely on the Gospel of Luke, bracketing out the book of Acts (although there is a nod to the second half of Luke’s work in the conclusion to the chapter). I would have rather had a longer chapter on Luke and Acts as a whole, or maybe a third chapter trying to integrate the material in some way.

Christopher Skinner begins his chapter on John in the imperial context by pointing out that in comparison to the synoptic gospels, there is far less interest in Rome and far more interest in presenting a “theology of Jesus.” What makes John of interest is the consensus view that he wrote from Ephesus toward the end of the first century. Again Warren Carter has written a monograph on John and Empire (T&T Clark 2008), so Skinner must interact with his arguments. In the end, Skinner states that Carter “tries to do too much history with too little evidence” (124).

Drew Strait takes on the problem of Acts and Empire. The topic is difficult primarily because most commentators find a very positive view of Rome in Acts.  Strait examines this consensus view as well as recent challenges and concludes that Luke is not openly critiquing Caesar, and that a critique of the Empire was not his purpose in writing Acts. Jesus is the Lord of all in Acts, and there are some indications that the preaching of the Gospel is a challenge to Rome (Thessalonica, Acts 17), but that is not the purpose of the book.  This conclusion is good, but here is where I would have liked to have some synthesis (or dialogue) between this chapter by Strait and Pinter’s on Luke.  Can the sort of language found in the birth narratives, for example, help us understand the more positive view of Rome in Acts?