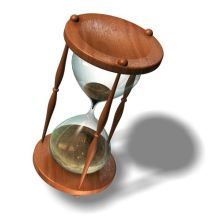 When his brothers encourage him to go up to Jerusalem, Jesus initially refuses their request because “his time has not yet come.” However, he does eventually go to Jerusalem in secret. His apparent refusal leads to some textual variation, since it is clear that Jesus says one thing and does another. One way to explain this is that Jesus said that he would not go now, but he would go later, separate from the family.

Carson, for example, tries to explain that when Jesus says “my time has not yet come,” he means that his time for leaving for the Feast has not yet come. D. A. Carson thinks the next line (“you can go anytime but I cannot”) means Jesus is simply thinking about when he was leaving for the Feast. This is possible, since the point of the rest of the chapter is to argue that Jesus does not act unless the Father directs him. Perhaps this simply means the Father directed Jesus to leave a few days later than his brothers.

It is also likely this is another example of Jesus initially refusing a request but eventually granting the request. In John 2, Jesus appears to refuse Mary’s request to “do something” about the wine. Just as Mary’s request was on an earthly level and Jesus’s answer was on the higher, messianic level, so too here with his brothers. They are thinking solely of Jesus’s status as a religious leader (“Go to Jerusalem where those sorts of people hang out”), Jesus is thinking about his real mission to die on the cross at the next Passover. Nicodemus and the woman at the well also mix up the earthly and the spiritual, except in those cases Jesus says something spiritual and they take it as earthly.

The timing of Jesus’s death is to be at the Passover, not the Feast of Tabernacles. If he appears there at the beginning of the Feast, there may be a unintentional “triumphal entry.” is actions would therefore be seen as messianic and probably develop into a riot!

The Feast of the Tabernacles is a week-long celebration of the Wilderness period (usually in late September or October, 15-21 Tishri, see Lev 23:34). In A.D. 32, the feast was celebrated Sept 10-17, the Fest of Dedication is two months later. Tabernacles is an 8 day pilgrimage in September or October at the end of the grape harvest. This is a season when many farmers were praying for rain. By the first century, there were daily processions from the pool of Siloam to the temple to the pour out libations on the altar. The courts of the temple were lit by huge torches, thus we have a combination of the themes of water and light that Jesus uses for the teaching sections.

In the prophets, the Exile was described as a long time in the wilderness. Israel was once again facing the punishment of God because of their covenant of unfaithfulness. The Fest o the Tabernacles naturally stirred the nation’s hope for a new Joshua who would begin another Conquest of the Land promised to Abraham. That Jesus is the same name as Joshua ought to not be ignored, since Jesus will draw attention to himself as a messianic figure during a Feast dedicated to a remembrance of that first Joshua and the end of the exile in the wilderness. The crowds think Jesus is the one who will end the long Exile of Israel, now under Roman rule.

The appointed time Jesus is looking forward to is his crucifixion, resurrection, and glorification.