We left our hotel and headed to Sardis. Two of the cites of Revelation do not have much to see, Philadelphia and Thyatira. The problem is both of these locations have modern cities built over them, making the kind of archaeology seem at Hierapolis or Laodicea impossible. I read the letter to Philadelphia as we drove past in our van rather than make the stop. This also freed up time to spend at Smyrna later in the day. 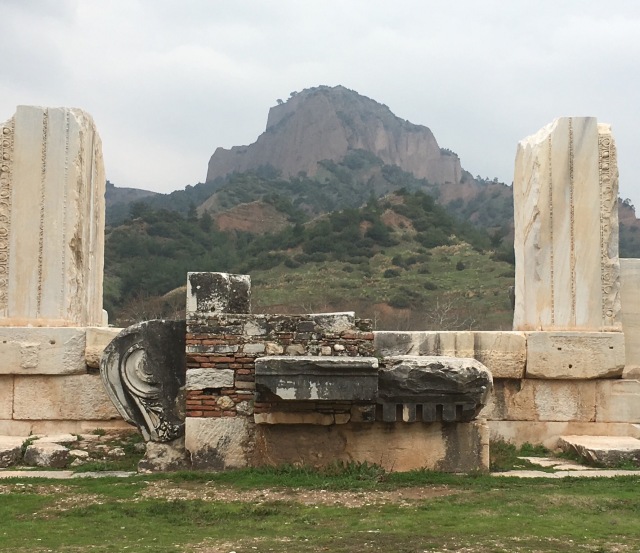 The highlight of the day was Sardis. This is not a large site, but it has three very significant features. First, there is a large synagogue dating to the fourth century A.D. The mosaic floors are partially restored including several mentioning the donors who contributed to the synagogue. There are two niches which could have been used to store a Torah scroll or possibly individual scrolls of the Septuagint.

Although is is surprising to see a synagogue in Turkey, Sardis is probably mentioned in Esther 3:12-14 and Josephus reports Antiochus III moved a large number of Jews to Sardis (Ant 12.148–49). This synagogue dates at least 400 years after that time and there are several odd things about the Synagogue, First, a Lydian stone table with lion motif have been placed near the front of the synagogue, Our guide suggested this table was a sacrificial / cultic table which was reused by the synagogue for Torah readings. This strikes me as odd, especially since it is really too tall for that purpose. It is certainly possible this table was use for Torah readings, but the reader would need a step-stool! Second, there are no benches along the walls as in other early synagogues, but rather a set of seats which looked more like a Greek boule to me. These seats are on the far end of the room, behind the table. I suppose the reader could face this semi-circle and men could sit there and hear the Torah, but there is room for only a small audience and the whole building could accommodate several hundred people.

The second impressive feature of Sardis is the façade of the gymnasium restored by a team from Harvard. Although much is not original, the reconstructed façade give the visitor a sense of the grandeur of the building. The inscriptions on the cornice pieces appear to have been colored in so they are more clearly visible, as they would have been when the building was new.

Temple of Artemis at Sardis

The third important feature of Sardis is a huge unfinished Temple of Artemis. This is a short drive from the main city and could be overlooked by a visitor, but for me this is really a treat. Since there is nothing left of the Temple of Artemis in Ephesus, this temple will give the visitor a taste of the immense size of an Artemis Temple, you can tell it was unfinished because the bases of several of the huge pillars have not been trimmed and several have incomplete or missing decorations. Like the temple of Artemis at Jerash (in Jordan), several massive pillars have stood since construction stopped. A small Byzantine chapel was eventually built on the sight and there are several examples of Christian graffiti on the temple walls.

After an excellent lunch (lamb kabob and a Turkish coffee) we drove all the way to Izmir to visit the Smyrna agora. Like Philadelphia and Thyatira, Smyrna is under the modern city of Izmir, with the exception of a portion of the agora discovered under an Ottoman era cemetery, The graves were relocated and excavations are ongoing. The highlight of the Smyrna agora is the underground vaults, but unfortunately we were not able to visit the closed section where archaeologists have preserved a large number of Greg-Roman graffiti. As odd as that sounds, these scribblings on the wall can tell you a great deal about what average people were like in the second century A.D.

Under the Agora at Smyrna

We are staying at the Mövenpick hotel in Izmir, an excellent hotel right on the bay. Since we arrived at the hotel a bit earlier than other nights on this trip, most of our group headed out to explore the city and seaside promenade (while I dutifully updated this blog!) The wifi is quite fast at this hotel, so I was able to add a few more pictures here and on yesterday’s post, Turkey Day 3 – Colossae, Laodicea, and Hierapolis. Check it out.