The traditional “background” to Philemon posits Philemon as a wealthy man and slave owner (15-16) probably living in Colossae.  He is described as a “partner” in Paul’s ministry and his house appears to have been used for meetings of believers (2).  His wife and son appear to share in the ministry of this house church.  Paul considers Philemon an “old friend.” It is possible he was saved in Ephesus when Paul spent three years earlier in the city. 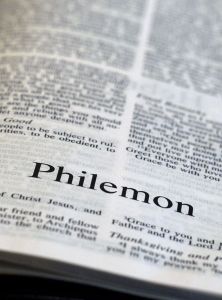 One of Philemon’s slaves, Onesimus has escaped and fled to Rome. It is possible Onesimus stole something from Philemon when he left. Rome is an easy place to “get lost” since it was very large; he could easily find a place to lay-low for the rest of his life.  While in Rome Onesimus meets Paul and accepts Jesus Christ as his Savior.  He apparently is with Paul for a while, since he is described as “useful” in Paul’s ministry.

Onesimus returns to his former master to ask forgiveness and accept his punishment.  The letter to Philemon is something like a “letter of recommendation” from Paul to Philemon vouching for Onesimus’ conversion.  Paul also promises to pay any debt Onesimus has incurred as a result of his escape.

This traditional background makes for a great story but it is hard to make this short letter fit this complex story. The main problem with the traditional view Onesimus’s encounter with Paul. If Rome is such a large city, how does Onesimus just happen to meet Paul there, a good friend of his former master?

One attempt to answer this problem is to assume Onesimus fled to Rome in order to find Paul and ask him to intercede on his behalf. Perhaps Philemon was not treating him fairly “in Christ” and he wanted to Paul to adjudicate their dispute. Paul would function as an amicus domini, a “friend of the master,” who is called upon to mediate a dispute. The situation is not unusual. In fact, Pliny wrote a letter which is similar to the situation in Philemon. In this letter Pliny writes Sabinianus on behalf of a freedman who has “fallen at his feet.”  Pliny asks Sabinianus to forgive a man who has insulted him in a youthful indiscretion.

A second possibility is Onesimus was an unsaved slave sent to help Paul in his imprisonment, perhaps on the analogy of Epaphroditus in Philippians. While working with Paul Onesimus accepts Christ and becomes useful in Paul’s mission in Rome. The letter of Philemon is therefore Paul’s requests to Philemon allow Onesimus to join Paul’s ministry team and perhaps even grant Onesimus his freedom.

A third, less likely possibility is that Onesimus is not a slave, but the wayward brother of Philemon. Verse 16 could be read as saying Onesimus is Philemon’s literal brother. The point of the letter would be the same (reconciliation with Philemon).

Fourth, perhaps Philemon was not the owner at all, but rather Archippus, from Colossians 4:17.  In Col. 4:17 Paul tells this man to “complete the work you have in the Lord.”  John Knox takes this to mean, “Free Onesimus.”  Philemon is the local “partner in ministry” in Colossae who is asked to act as a go-between for Onesimus and Archippus.  While this is an intriguing theory, there are a number of un-provable assumptions standing behind it.

25 thoughts on “Why Did Paul Write to Philemon?”