As most tours of Israel must do, we started with a very long travel day. Very Long. We left Grand Rapids about 3:30. The bus ride was smooth and we had no traffic or weather delays (which is unusual), passed through security quickly and with no hassles (also quite unexpected). Our Lufthansa flight had a layover in Frankfurt and the connection to Tel Aviv was delayed. Bottom line, we ended up and the Leonardo Hotel in Jerusalem after 1AM. The staff at the Leonardo was very accommodating and laid out a nice snack for us even though the kitchen was long closed by the time we arrived.

Fortunately our guide was flexible and we delayed our first day’s activities until 10AM. Most people had a good night’s sleep, some a little two good and we had to pound on a few doors. We did a quick drive around the Old City, visiting the overlook at Mount Scopus. We walked through the Jaffa Gate and made our way through the Armenean Quarter to Zion Gate to visit the Upper Room and the Tomb of David. Neither of these sites are particularly authentic, but the whole area around the Church of the Dormition has been refurbished. Although we did not visit the church, it was until recently known as Abbey of Hagia Maria Sion and commemorates the the location of Mary’s death. Other than several very large groups jockeying for position the students enjoyed the view from the rooftop over the Kidron. The day was clear enough to see the outline of the Herodium, that is not always possible.

We then walked into the Jewish Quarter to see the Byzantine Cardo. This is the Roman street which was discovered after the Six-Day war. Compared to other Roman cities, this main street through the city is on at all well preserved, but they have set up some art to give us an idea of what it might have looked like. From there we walked over to the viewing point for Hezekiah’s wall. Only a small part is exposed, but this is the wall Hezekiah built before the Assyrian invasion (2 Kings 18; Nehemiah 3:8; Isaiah 22:9-10). After lunch (falafel for me) we walked down to the  Western Wall Plaza. For those who have been to Jerusalem, the viewpoint about halfway down the stairs is closed for repair; the large menorah has been moved up into the plaza in the Jewish quarter. Since we were there in the afternoon the crowds at the wall were small and I had several good conversations about the history of the Western Wall with students (and got a blessing from one of those random beggars who was not happy with a non-paper “gift”).

We then did a tour of the Temple Tunnel, something I have not done for several years. Quite a bit has changed, especially in the first part of the tour (including a a new synagogue and several nice stairways. The tunnel follows the Western Wall underground for about 1500 feet. There are a number of places with first century paving stones and at least one spot that dates to the Hasmonean period. 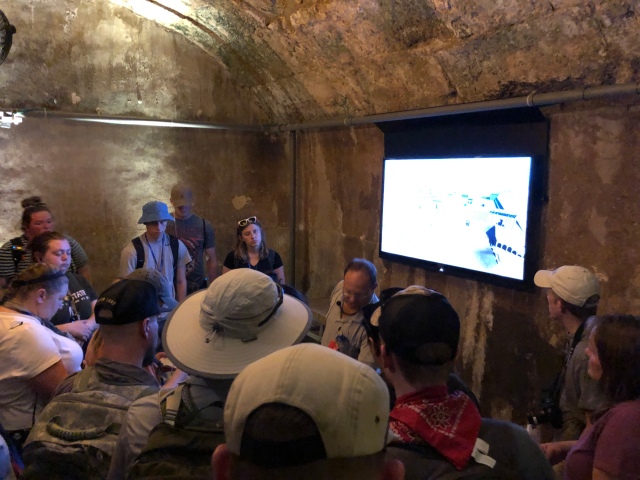 The exit to the tunnels is across from the Church of the Flagellation, the traditional site where Jesus was flogged by the Romans; it is the second station of the cross on the Via Dolorosa. We walked past many of the other stations to the Church of Holy Sepulcher. Our guide took in the “back way” (which sounded sneakier than it really was). We basically avoided the crowd by cutting through the Ethioptic church to enter the plaza in front of the church. The Church of Holy Sepulcher is really a collection of churches and chapels on the traditional site of Golgotha and Jesus’s tomb. I took some of the students to Golgotha and had a good discussion of the value of traditions which support the site (some are very good, others are very weak). The line to enter the actual tomb of Jesus was very long so I took the students into the Syrian Chapel. There are usually very few people in the Syrian chapel, but there are two first century tombs in the back of the chapel which are good illustrations of the tomb people are waiting an hour or more to enter.

Se ended the day by walking through the Muslim Quarter to the Damascus Gate and up to the Garden Tomb. As always, this is simply a lovely spot to read the story of the resurrection and reflect on Jesus’s death and burial. It is irenic, especially when compared to the Holy Sepulcher. All things considered, the Holy Sepulcher has a better claim on being the actual location of the crucifixion and location of Jesus’s tomb, but the Garden Tomb is a much better place to actually worship. After a very nice orientation by the Garden Tomb’s own guide we entered the tomb and then celebrated communion. Since we were the last group of the day, most of the students were able to spend a few minutes privately reading Scripture or praying in the quiet garden.

We have a big day planned tomorrow at the Yad VaShem and the Israel National Museum (the Dead Sea Scrolls, the Jerusalem Model and the archaeological wing of the national museum).

4 thoughts on “The Old City of Jerusalem”