This new addition to IVP Academic’s Little Book series is an encouragement to fall in love with the noble calling of biblical studies. Previous books in the series include Kelly Kapic (for new theologians), Paul Copan (for new philosophers) and Josh Reeves and Steve Donaldson, (for new scientists). E. Randolph Richards is a veteran of biblical studies, having written many articles and books, including Misreading Scripture through Western Eyes and Paul Behaving Badly (both with Brandon J. O’Brien) and contributed to Rediscovering Jesus (with David Capes and Rodney Reeves). Joseph Dodson is a professor of biblical studies at Ouachita Baptist University and has contributed several books including The ‘Powers’ of Personification: Rhetorical Purpose in the ‘Book of Wisdom’ and the Letter to the Romans (DeGruyter, 2008). 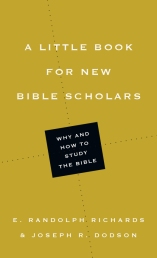 Richards and Dodson believe the church needs quality biblical scholars who work with the biblical text, do quality exegesis, or produce material which illuminates the text of the Bible. In this book they offer advice to students who are working towards a career in academia. They point out bad exegesis dilutes and distorts the gospel and can actually hurt members of the body of Christ (49). A career in biblical studies may take the form of pastoral ministry or teaching in the majority world. The church needs well-trained pastors to provide biblical based answers to the sloppy and dangerous use of the Bible common among many congregations.

Some of the advice in the book is familiar. For example, Richards and Dodson encourage students to work on their own spiritual life, to be involved in church and community (don’t be a hermit), and to be aware scholarship can “puff up.” The call on biblical scholars is to serve in ministry (101) and take care of their heart (105). They warn new biblical scholars to avoid fads, citing the example of the resurgence of Reformed theology among younger Christians. Dodson sheepishly confesses he did devotions using the Westminster Catechism (he now considers himself a “recovering Calvinist”). The trouble is distinguishing between fad and a serious movement within scholarship, but that is for another book.

Perhaps the most important chapter in the book is their admonition to remember biblical studies is an “equal opportunity vocation.” Take a look around most sessions at national scholarly meetings (ETS or SBL); participants are mostly white and mostly male. Richards and Dodson want to encourage people outside western academia to become scholars and contribute to biblical studies. They quote Lynn Cohick at length on her career as a biblical scholar (82-3). But this section of the book wants to avoid putting scholars into pigeon-holes based on ethnicity or gender. A Latino does not only create a “Latino reading” nor should a female scholar’s work be considered “a woman’s view” of the text. If a person is contributing good scholarship then they should not be put into some subcategory (and potentially disregarded as only offering a female perspective).

The book includes a series of quotes from established biblical scholars. Many of these pass along advice the scholar received from an older scholar.

A Little Book for New Bible Scholars is an inexpensive book which would make an excellent gift to a student who is working hard at a biblical studies degree, whether in a Christian undergraduate program, seminary, or at Ph.D level. Older scholars reading this book will recognize some of their own advice to students and perhaps remember their first love for biblical studies.

Here is a short book trailer with Joseph Dodson:

NB: Thanks to IVP Academic for kindly providing me with a review copy of this book. This did not influence my thoughts regarding the work.