There is nothing in Psalms of Solomon 5 to hint at a date or historical circumstance. The psalm begins with praise to God for his gracious provision during a time of affliction (v. 5). Several times the author describes himself as hungry (v. 8, 10, 11) or in need of kindness (v. 13), but there is no specific historical situation in mind. Most Jews living in the Diaspora would hear their own experience in this Psalm. 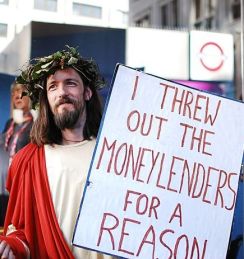 In verse 5, Wright translates θλίβω as “persecution in OTP, but the verb does not necessarily connote a religious or political persecution. For example, Paul used the verb in 2 Corinthians 4:8 to describe his own troubles. Sometimes he was persecuted by the Jews or the Romans, but the verb refers to all sorts of troubles he faced. It is tempting hear an echo of the troubles faced by Pharisees under Alexander Jannaeus. Jannaeus arrested 800 of his enemies, many of whom were Pharisees. He crucified these men while he banqueted with his wife and concubines, viewing the executions (Antiq. 13.410-15). Unfortunately there is nothing in the psalm which clearly echoes this event.

Verse 7 is a possible echo of Daniel 3:16-18. In that passage Shadrach, Meshach, and Abednego were sentenced by Nebuchadnezzar to be thrown into the fiery furnace. When the king offers them one last chance to worship the image of the king, they reply “our God whom we serve is able to deliver us from the burning fiery furnace, and he will deliver us out of your hand, O king. But if not, be it known to you, O king, that we will not serve your gods or worship the golden image that you have set up.” After describing his afflictions, the writer says “Even if you do not restore us, we will not stay away, but will come to you” (5:7). Like the three young men in Daniel, the writer of this Psalm is willing to suffer affliction and hardship. He knows the Lord may save him, but even if he does not, he will persist in his commitment to his God.

Finally, verses 16-19 are a wisdom saying encouraging moderate living and contentment. Verse 16 begins with a makarism, a “blessed are” saying like the Beatitudes in Matthew 5. In this case, the blessed (or “happy”) person is the one God remembers with “moderate sufficiency.” The noun (αὐτάρκεια) refers to contentment with one’s circumstances. BDAG comments the word refers to a “favorite virtue of the Cynics and Stoics.” Paul uses a cognate word (αὐτάρκης) in Philippians 4:11, “I have learned in whatever situation I am to be content.” In 1 Thessalonians 4 Paul calls his readers to live a quiet life, similar to the Jewish philosopher Philo who said the quiet life was the goal of the righteous: “…while those who pay due honor to excellence cultivate a tranquil, and quiet, and stable, and peaceful life” (Philo, On Abraham, 27). The Testament of Issachar 7 also encourages readers to live a simple life, to work hard and mind your own business.

This Psalm does not argue that the righteous person should live in a state of voluntary poverty. Jesus called his disciples to leave everything behind and follow him (Mark 10:17-31 and parallels). After Pentecost, Jesus’s disciples lived in voluntary poverty (Acts 2:42-47) and the Jerusalem community seemed to have continued to be voluntarily poor for some time. Paul is encouraged to “remember the poor” (Gal 2:10), possibly a reference to the Jerusalem community. The letter of James certainly has stern warnings for the rich who overlook the poor.

One final note on this Psalm: the final verse refers to the kingdom of God. The “good things” in the first part of the verse are expanded to all Israel. Wright translates the phrase “in your kingdom your goodness (is) upon Israel,” suggesting the implied verb as present tense. The Lexham LXX takes the implied verb as past tense, “your goodness was upon Israel your kingdom.” This translation also ignores the dative phrase “in your kingdom” (ἐν τῇ βασιλείᾳ σου). Kenneth Atkinson’s translation of the Psalms of Solomon in the NET understands the optative verb (εὐφρανθείησαν) at the beginning of the sentence is linked to this phrase as well, translating “and your kindness be upon Israel in your kingdom.” The NET puts the phrase into the context of a blessing.

This is not technically a reference to a future kingdom, but the writer of the Psalm is looking forward to a time when those who fear the Lord and are celebrate the good gifts of the Lord share in God’s kindness in his kingdom. There is a hint of eschatological hope in Psalms of Solomon 5:19

3 thoughts on “Moderate Wealth with Righteousness – Psalm of Solomon 5”