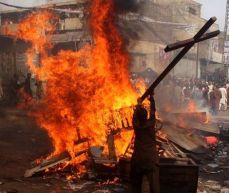 It is possible the original readers of 1 Peter wondered about the status of their salvation. They knew God had promised the Jewish people a return from the exile, a return to the “promised land” and a righteous and just king to rule over them in a time of prosperity. Yet the Jewish people remain in exile, Rome rules over them with an iron fist and the political circumstances of the early 60s would seem to indicate that some sort of war between Rome and Jerusalem was inevitable.

The original readers believed Jesus was in fact the messiah and that his death and resurrection had inaugurated a new age. They were awaiting the return of the Messiah to establish his kingdom in Jerusalem. But instead of a glorious return of the Messiah, the original readers of this letter were suffering oppression and persecution as a result of their faith in Jesus as Messiah. It is unlikely this was the sort of systematic persecution by Rome that would later be the case, but it was no less shocking given the hope they have in Jesus.

Does the persecution mean that they have not inherited salvation? Have they put their faith in Jesus in vain? Peter’s point in these opening verses is that the believer in Jesus has a new status (they are born again into God’s family) and that their inheritance is kept for them by God himself. In fact, by its very nature, their inheritance is unable to fade or become worthless.

In response to these fears, Peter first describes salvation as “an unfading inheritance” (1:3-5).  Peter is writing to Jewish Christians who are in fact suffering for their faith, so in this introductory prayer he introduces the main themes of the letter. The Christian will suffer in this age, but that suffering is not an indication of punishment. In fact, genuine salvation is completely secure because it is kept by God himself.

Second, Peter says we are born again into “a living hope.”  While “born again” is a common way to describe Christians in the contemporary church, Peter is the only writer in the New Testament to use the verb ἀναγεννάω to refer to the spiritual experience of the believer, although the concept appears in 2 Cor 5, for example, and is implied in several adoption passages (we are children of God, etc.).

All of this language refers to the Holy Spirit’s regeneration of the believer. Peter says here that we have “a great salvation” not simply because we get to go to heaven someday, but because we have been fundamentally changed through the power of the Spirit of God and the resurrection of Jesus.  Ernest Best points out that this should not be reduced to a metaphor. It is not the case that believer’s experience is “like being born again.” We are in fact born again (Best, 1 Peter, 75).

Third, this regeneration to new life is through the resurrection of Jesus from the dead. It is somewhat surprising that he does not say through the blood of Jesus, or the Cross. Peter’s focus is on the coming of the new covenant in the resurrection of Jesus from the dead; since he lives, we also can have life.  Peter described the hope we have on the basis of the resurrection of Jesus and the regeneration of the spirit as an inheritance.  This is a very biblical way to describe salvation. In the Hebrew Bible, Israel was redeemed from their slavery in Egypt and brought to the “promised land.” That land was their inheritance, promised to Abraham in Gen 12. In the New Testament Paul describes our salvation as an inheritance (1 Cor 6:9, 15:50, Col 3:24, Titus 3:7; cf., Heb 1:14).

In our increasingly post-Christian America, it is possible some more conservative evangelicals may have the same questions as Peter’s original readers. When is Jesus going to return and judge those people! How should this description of our salvation in 1 Peter change the way we look at the changing role of Christianity in contemporary culture?