In fifty-six page the introduction to the commentary, Dempster covers the usual material expected in an Old Testament commentary. He uses Micah’s name (“Who is like Yahweh?) as an entry point into the book. The book is about the incomparable Yahweh who will remove sin because of his great loving kindness (חֶסֶד). But Dempster suggests the name is not a question but a “cry of desperation” of lament because here are so few in Judah who are “like Yahweh” (3-4). Its leaders are corrupt and do not practice justice or loving kindness. Judah has already become a failed state like modern Somalia, prompting Micah’s lament. 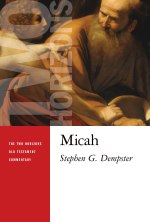 Dempster’s goal in the commentary is to understand the original historical context of the oracles before examining their literary context (17). For this reason the introduction has a solid section placing Micah into the history of Judah in the late eighth century, especially in Assyrian invasion of 701 B.C. Dempster realizes the view that Micah is largely responsible for the original oracles is a minority view in contemporary scholarship (30), but he argues this allows him to view the book as a unified whole rather than a collection a oracles from various, unknown prophets who are dislodged from a real historical context.

This recognizes the individual speeches of the book of Micah were given in a specific historical context, but also that they were placed into a literary context at some point after the events. For example, Micah 1:6 refers to the fall of Samaria as a future event from Micah’s perspective. For the original audience, Samaria still existed, but for the primary audience of the book, Samaria had already fallen. Dempster argues an act of communication requires a recipient of the message. For Micah, the original audience is not always clear. Perhaps Micah 2:1-5 was written before Sennacherib’s invasion of 701 B.C., but it is difficult to know this with certainty (37). Because of this, it is not necessary for Dempster to know the exact historical context to do theological interpretation. As he says, “to know the historical situation behind Micah 2:1-5 coming away with a revulsion of the evil described is to lose one’s exegetical and theological soul” (38).

Following the exegetical comments, Dempster makes two sets of theological comments, “Micah’s Word Then” and “Micah’s Word Now.” In the first set of comments, Dempster tries to tease out how the oracle relates to the original audience who heard Micah’s oracle as well as the primary audience who read the words of Micah prior to the fall of Jerusalem in 586 B.C. For example, commenting on Micah 2:1-11 Dempster argues the lower members of an agrarian society such as ancient Judah did indeed endure the injustice of foreclosure and confiscation of land. The ones committing this injustice thought they were safe from the Lord’s judgment because the prophets spoke well of them. But Micah says they will be stripped and driven from their homes, foreshadowing the fall of Jerusalem. Dempster then turns to “Micah’s Word Now” in order to bridge the gap from the late eighth century B. C. to modern western world. Here Dempster makes his own prophetic speech condemning wealth and consumerism in the west. “The attitude of the Christian church,” Dempster says, should be “to speak the truth in love, presenting Christ as the answer to such covetousness, criticizing injustice and rebuking evil…” (98-99).

The theological conclusion to the book (pp. 194-237) follows the same pattern as the interpretation sections in the commentary. Dempster briefly summarizes a series of theological themes in the book of Micah, including Micah’s vision of God, God and the nations, Justice, Land, Temple, Messiah, Worship and several others. These brief reflections connect the content of Micah to the larger interests of the Hebrew Bible. The second section draws implications from Micah to the “present day issues.” Some of these topics are expected (Justice; Idolatry, Covetousness and Injustice) but others are surprising (“Modern Ministry and the Role of the Spiritual Leader” and ‘Cheap Grace”). In the commentary Dempster pointed out Micah’s struggle against the “cheap grace” of his day, the belief of those who controlled Jerusalem and the Temple that they were somehow exempt from responding to the voice of the prophet and doing justice towards the poor. He draws the uncomfortable analogy to the modern church and its “barcode Christianity” that demands loyalty to a doctrinal statement without any attempt at loving mercy, doing justice, or walking humbly with God (250).

Conclusion. Although Dempster currently teaches at Crandall University in New Brunswick, Canada, he wrote the majority of this commentary in Cameroon. As he says in the introduction, spending time with Micah in Cameroon was “a tonic for my soul but a goad to my conscience” (vii). Anyone who takes the time to carefully read the eighth century Hebrew Prophets will be struck by the obvious parallels between the abuse of the poor in Micah’s day and modern injustice in the affluent west. While Dempster is faithful to the text of the Hebrew Bible, he offers a challenge to readers of Micah who ignore the plight of the poor while perusing wealth and prestige.