Leslie Hardin is a contributor to the Journal of Spiritual Formation and Soul Care and wrote The Spirituality of Jesus for Kregel (2009). Like his previous book Hardin does not write a book on practice spiritual disciplines, but rather a series of short reflections on what Paul thinks is key to spirituality. Although this is not a “how to” guide for spiritual life, readers will be encouraged as they reflect on what Paul says about these topics. For Hardin, Pauline spirituality is a “practical partnership with the Spirit,” an expression of the Spirit of God already at work in the life of the believer (17). 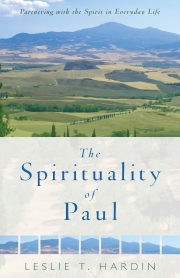 In the introductory chapter, Hardin discusses Paul’s sometimes controversial commands to “imitate me.” Hardin expresses a common frustration with Paul’s somewhat arrogant view that he is worthy of imitation, especially in matters of spiritual discipline. After all, Paul seems opinionated and angry, perhaps even demanding of his congregations. Why imitate Paul, when Peter and John are original disciples of Jesus? In fact, why imitate Paul when we ought to be imitating Jesus? Like Randolph and O’Brien recent Paul Behaving Badly, Hardin wants to read Paul’s letters in order to answer some of these objections while focusing on the “shape” of Paul’s spirituality.

Hardin discusses ten themes in Paul: Scripture, prayer, disciple-making, proclamation, worship, holiness, spiritual gifts, edification and suffering. Some of these are certainly within the sphere of spirituality, but several are in the category of imitation. Disciple-making, for example, is not usually included in a list of spiritual disciplines. However, as Hardin explains, Paul’s missionary method intentionally sought out individuals to develop into disciples who were told to go and find others to disciple. This process of discipleship hands down tradition from Jesus to Paul, to Paul’s disciples and then to their disciples. Hardin’s discussion of spiritual gifts is good and approaches a potentially contentious issue with wisdom, but it does not always speak to the topic of “spirituality in Paul.”

Hardin discusses the shape of Pauline spirituality in his final chapter. First, Paul was faithful to Scripture. According to Hardin, Paul saw Scripture as a tutor leading to godliness through Christ. Second, Paul was an imitator of Jesus (1 Cor 1:11). Although he encouraged his disciples to imitate him, his eyes were fixed on Jesus. This is not a lame “year of living like Jesus,” but rather living out the lifestyle of Jesus in a way which impacts the world. Third, living life as an imitator of Jesus is, for Paul, a life of freedom. Hardin is clear imitating Jesus is not living exactly like Jesus in every single detail, but embracing the freed from guilt one has as a child of God. Fourth, imitating Paul as he imitates Jesus should result in glorifying Jesus. Paul sees glorifying Jesus as the goal of everything Paul says in his letters. Fifth, Paul’s spirituality is committed to unity. It is undeniable Paul desires his churches to be unified both in doctrine and practice. Finally, Hardin points out the basis of any talk of the spiritual of Paul is his emphasis on the activity of the Holy Spirit.

There are a few things missing in the book. For example, Hardin has consciously avoided interacting with any of the classics of spiritual discipline. Although the focus on Paul might have limit the use of some of these classics, I would have expected some interaction with Rodney Reeves’s Spirituality According to Paul (InterVarsity, 2011). It is also remarkable (or refreshing depending on your perspective) that a book on the spiritual of Paul does not use the work cruciform. In fact, there are only one or two citations of Michael Gorman in this book. Gorman’s Becoming the Gospel is likely too recent to have had an influence on Hardin, but certainly his previous books merit more than a brief citation (Cruciformity: Paul’s Narrative Spirituality of the Cross, Eerdmans 2001 and Inhabiting the Cruciform God: Kenosis, Justification, and Theosis in Paul’s Narrative Soteriology, Eerdmans 2009).

Conclusion. Despite this reservations, Spiritual of Paul is a good introduction to the several key areas of discipleship in the Pauline letters. Hardin’s style is inviting and will be appreciated by both layperson and scholar. The book would be ideal for a small group Bible study.

NB: Thanks to Kregel for kindly providing me with a review copy of this book. This did not influence my thoughts regarding the work.