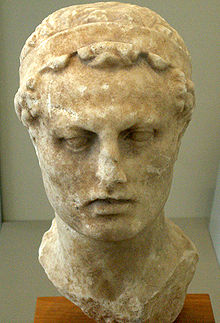 In 168 B.C. Antiochus IV Epiphanes made a second campaign into Egypt with the intention of annexing it to his own kingdom. This time things were not to go as well as he had planned. His army was met by a delegation from the Roman senate led by Popilius Laenas.  Popilius presents Antiochus with a letter from the Senate ordering him out of Egypt or face the wrath of Rome. Antiochus asked for time to consider the letter, so Popilius drew a circle around him on the ground and told him not to leave the circle until he made his decision.  Humiliated, Antiochus was forced out of Egypt. Much of this history is found in Daniel 11:21-35.

On his way back through Palestine to Syria, he learns of the uprising in Jerusalem caused by the competing high priests. Jason had picked this time to make his attempt to regain the office of High Priest based on a rumor which said Antiochus had been killed in battle (1 Macc 1:16-19). Antiochus waited until the Sabbath then sends his general Appolnius and some mercenaries into Jerusalem.  They slaughter men, women and children indiscriminately and burn much of the city.

Antiochus IV Epiphanes fortified the citadel heavily, imposed a heavy tax on the city for the rebellion, and confiscated land.  He occupies the city with foreign troops and Hellenistic sympathizers. 1 Mac 1:35-36 calls these “people of pollution” who defile the sanctuary.  But this text also says these foreigners became a “great menace,” using the noun παγίς, often translated “snare” or “trap.” The word is often used for a trap laid by an enemy, as in LXX Psalm 56:7 (ET 57:6) or Jeremiah 5:26. The Greek invaders are certainly a danger, but the real danger for the writer of 1 Maccabees is the temptation to surrender to the Gentiles and forsake the covenant.

The most shocking example of this is the action of Menelaus the High Priest. As he would have in any other captured city, Antiochus combined the worship of Yahweh with Zeus. Within the temple itself Antiochus sacrificed to Zeus, supported by the high priest and the Hellenistic Jews.

1 Maccabees 1:37-40 On every side of the sanctuary they shed innocent blood; they even defiled the sanctuary. 38 Because of them the residents of Jerusalem fled; she became a dwelling of strangers; she became strange to her offspring, and her children forsook her. 39 Her sanctuary became desolate like a desert; her feasts were turned into mourning, her sabbaths into a reproach, her honor into contempt. 40 Her dishonor now grew as great as her glory; her exaltation was turned into mourning.

There were two “paths of resistance” in the Maccabean revolt. One could take up arms, as Judas and his brothers did, or one could resist passively and be martyred for the faith.

1 Maccabees 1:62-65 But many in Israel stood firm and were resolved in their hearts not to eat unclean food. 63 They chose to die rather than to be defiled by food or to profane the holy covenant; and they did die. 64 Very great wrath came upon Israel.

For the writer of 1 Maccabees, violence was indeed the answer.

20 thoughts on “Factors Leading to the Maccabean Revolt (Part 2)”