At the conclusion of his discussion of the relationship between faith and works, James uses Abraham as an example of a person who obeyed God and was declared righteous. He alludes to Genesis 22 and quotes Genesis 15:16 and concludes that a person is considered righteous because of what they do, not on the basis of faith alone (James 2:24). Usually scholars focus on the glaring clash between this verse and Paul’s argument in Romans 4 that Abraham was justified by believing in God (Gen 15) before he was given the rite of circumcision (Gen 17). For Paul, one is justified “by grace through faith not of works.”

I have written on this aspect of James before, but in preparing for a lecture on the ethics of James I wondered why James uses Rahab as an example in 2:25. Scholars often pass over this verse as if it was an appendix to the argument and not of any real importance. But Rahab is mentioned twice in the Jewish-Christian literature, Hebrews 11:31 and James 2:25-26. 1 Clement 12 refers Rahab as well, observing that her “faith and hospitality” saved her. Clement is not interested in Rahab as a Gentile convert. Rather, Clement connects the “scarlet thread” to the blood of Jesus so that “not only faith but prophecy is found in this woman.”  In all three cases Rahab is a paradigm of faith because she acted on behalf of the spies.

In Joshua 2 Rahab is presented as an example of a “righteous Canaanite.”  This is remarkable since she is introduced as a זֹנָה, a prostitute and she betrays her own city to the enemy by lying to the authorities. After she has protected the spies, she says she has heard of God’s victory in Egypt and understood that Israel’s God is “the LORD your God, he is God in the heavens above and on the earth beneath” (Josh 2:11). Since she has protected Joshua’s two spies and is therefore exempt from the destruction of all the people of Jericho (Josh 6:17). 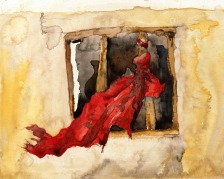 When scholars examine Paul’s argument in Galatians 3 or Romans 4, they often ask why Paul used Abraham as an example of justification by faith. Sometimes they suggest Abraham was used by Paul’s opponents to argue Gentiles (like Abraham) should submit to circumcision as did Abraham. After all, Abraham was also a Gentile who expressed his faith in some concrete action (offering Isaac as a sacrifice). The use of Abraham in James 2:20-24 supports this, since Paul seems to be in conflict with “men from James” in Galatians.

My question in James 2:25 is similar: why does James use Rahab as an example of someone who was “considered righteous”? He uses the same aorist passive of δικαιόω as James 2:21 and Romans 4:2, both referring to Abraham being declared righteous. Perhaps Rahab fits the pattern of a Gentile who has heard the word of God (the Exodus and Israel’s victories in the wilderness), has expressed faith in the God who did these things, and confirmed her faith by some concrete action.

For James, Rahab may be a better example for his point since she demonstrated her faith by hiding the spies before she expressed her faith in the God of Israel. Out of all of the residents of Jericho, only Rahab and her family were saved from destruction and only because she expressed her faith through an action.  As the climax of the faith vs. works discussion, James says faith without works is dead (v. 26), just like the people of Jericho! The warning to the reader is that even for the Gentiles, some real expression of faith is necessary in order to faith to be “saving faith.”

This discussion is always difficult because we have a tendency to read our theological presuppositions into the text (I know I do!). But if we only had James to construct Christian theology, how different from Pauline Theology would our view of salvation be? Or, are Paul and James really not that far apart after all?