Gundry, Robert H. Peter: False Disciple and Apostate according to Saint Matthew. Grand Rapids, Mich.: Eerdmans, 2015. 139 pp. Pb; $20.   Link to Eerdmans   Video of a lecture Gundry gave at Westmont on the topic of this book.

This short study by Robert Gundry makes the somewhat surprising claim that Matthew considered Peter to be a “false disciple and apostate.” In the introduction to the book Gundry makes his motivations clear. This is not an anti-Catholic book and he is not interested in subverting any traditions about Peter. Nor is he interested in the “historical Peter,” assuming a history of Peter’s life could be written. Gundry’s project is strictly limited to the presentation of Peter in Matthew’s gospel only. 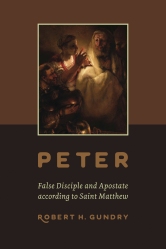 In order to reach this conclusion, Gundry analyzes every appearance of Peter in the Gospel of Matthew. By way of method, Gundry employs redaction criticism in order to show Matthew edited Mark’s narrative to present Peter as an example of a disciple who was very close to Jesus but ultimately failed to follow through on his commitment to Jesus. In the end, Peter is left “outside in the darkness, where there is weeping and gnashing of teeth.” Gundry’s use of redaction criticism is well-known from his commentaries on Matthew and Mark, therefore many will pre-judge some of his comments based on his method alone.

After a short introductory chapter on method, Gundry’s second chapter surveys all of these texts prior to the climactic confession of Peter in Matthew 16. Peter is not presented in these texts as a model of faith, in fact, the famous story in Matt 14:22-33 does not demonstrate Peter’s faith, but his lack of faith. The story of Peter’s request to walk on the water is not found in the other Gospels. Matthew therefore chose to report the words of Peter, “If you are Jesus (14:28) in similar language to the devil in the Temptation (4:3, 6). The other disciples in the boat confess Jesus as God’s son and worship him, but Peter is not included in that group (12).

In Matthew 16:13-32 Jesus seems to call Peter to be the leader of his church. Gundry therefore examines this pericope in detail in chapter 4. By confession Jesus is the Messiah, Peter is “playing catch-up” since the other disciples have already done so in 14:33 (16). The real issue in Matt 16 is Jesus calling Peter “the rock.” Gundry argues the “rock” refer to the words of Jesus, recalling Matt 7:24, the wise man builds his house on the rock.”  The bedrock in Matt 7:24 is clearing the words of Jesus (μου τοὺς λόγους τούτους). Peter himself is cannot be the “foundation of the church” since the church will be built on the teaching of Jesus. He is the one teacher (Matt 23:8) and the disciples will be commissioned to disciples the nations by teaching them everything Jesus has taught (Matt 28:20). The “keys to the kingdom” and “binding and loosing” both refer to teaching Jesus’ words, not the words of Peter as the successor of Jesus. The disciples are to convey Jesus’ words, not interpret them (25).

After Peter’s confession, Jesus reveals he will die in Jerusalem (Matt 16:21). Peter rebukes Jesus for this prediction (16:22). The brazenness of this rebuke is often lost in translation, but disciples do not rebuke their masters in the ancient world. Peter not only rebukes, but Matthew uses a double-negation plus a future indicative, the strongest negation in Greek. Jesus calls Peter Satan and a snare. Again, this stinging counter-rebuke is often translated to put Peter in a good light, but Matthew uses σκάνδαλον, a temptation to sin. In Matthew, Jesus has already said anyone who causes others to sin (πάντα τὰ σκάνδαλα) will be thrown into the fiery furnace where there is “weeping and gnashing of teeth” (13:41-42). For Matthew, all “σκάνδαλα belong in hell” (30). 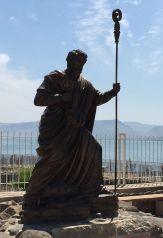 Chapter 4 traces several appearances of Peter in Matt 17-26, from transfiguration to the Garden of Gethsemane. Most of these are examples of “redactionally anti-Petrine moves by Matthew” (40). In Matt 19:27-30, when Peter responds to Jesus’ “camel through the eye of a needle saying, Matthew adds “what therefore will we have?” (τί ἄρα ἔσται ἡμῖν;). This future expectation of reward is not in the parallel in Mark or Luke. For Gundy, this is evidence Matthew is presenting Peter as “angling for present compensation” (39).

Gundry argues Peter’s denial of Christ is a parallel to Judas’s betrayal and suicide (chapter 5). He carefully examines the details of Peter’s denial, demonstrating Matthew’s modifications of Mark show Peter has apostatized. Matthew has redacted Mark in order to demonstrate the gravity of Peter’s denials. Peter swears with an oath (καὶ πάλιν ἠρνήσατο μετὰ ὅρκου, 26:72). In a passage unique to Matthew, Jesus states his disciples should not take oaths. For Gundry, this is flagrant disobedience to the Lord’s commands. By verse 74, Peter begins “to curse and swear,” another redaction by Matthew in order to highlight Peter’s apostasy; Matthew changes Mark’s ἀναθεματίζω to καταθεματίζω and drops “on himself” from Mark 14:71. In Mark, Peter is cursing himself, in Matthew he is cursing others (49-50).

Peter obviously denies his Lord, but most commentators are adamant Peter is restored after the resurrection. His bitter weeping is usually understood as a demonstration of his great remorse in contrast to Judas’s suicide. Gundry lists two dozen statements from various commentaries which try to rehabilitate Peter and offers a short response for each. For Gundry, the “bitter weeping” indicates Peter is an apostate who has in fact move into the darkness, “where there is weeping and gnashing of teeth.”

In to this evidence, addition, there are a number of places in Matthew where Peter’s name is omitted. Chapter 6 examines these “non-appearances” of Peter and argues they represent Matthew dropping Peter because he is an example of a false disciple. For example, in Mark 16:8 the angels tell the women to go and tell the “disciples and Peter.”

Chapters 7-8 develop two threads Gundry has traced in this book as well in his commentary on Matthew. First, Gundry gathers more than twenty texts in Matthew describing false discipleship and concludes both Peter and Judas are quintessential false disciples (88). Just one example: In the Wedding Banquet parable (Matt 22:1-14) scholars are often perplexed by the unprepared man in the second part of the story. For Gundry, this man is a professing disciple who is marked as a false disciples because of his lack of wedding clothes (79). Like Peter, this man is one of the many who were called but not chosen and will remain outside, where there is “weeping and gnashing of teeth.” The second theme Gundry traces is flight from persecution in Matthew. He examines (briefly) eight pericopae in which those who flee persecution are condemned.  A false disciple is exposed when there is persecution. Like Peter’s betrayal, the false disciple will show themselves and deny Jesus publically.

In his final chapter Gundry makes a few suggestions based on the texts surveyed in the book. He speculates a gospel presenting Peter as an apostate could not be written after his martyrdom, so his argument for Peter as a false disciple implies an early date for the writing of Matthew. A corollary he does not mention is dating Matthew to before A.D. 70 pushes the date for Mark/Q perhaps a decade earlier.

A second implication is more speculative. Like many scholars, Gundy associates Matthew with Syrian Antioch. Galatians 2:11-14 describes a face-to-face confrontation between Paul and Peter. Gundry gently suggests Matthew reflects a situation where Paul won his argument with Peter. He recognizes this echoes the old Tübingen school, but it “may call for further investigation” (103).

Conclusion. A book entitled Peter: False Disciple and Apostate will naturally generate a great deal of interest since Peter is beloved as the first leader of the Christian church. This is certainly true in the Catholic tradition, but evangelical pastors love to preach about thick-headed Peter, a simple man used by Jesus to found the Church. Doubtless many will point to John 21 as a “restoration of Peter,” but that is John’s story and not Matthew’s. Gundry has delimited his topic to only Matthew’s Gospel, so the “restoration” of Peter in the other gospels or tradition does not matter to him.

But it is true the Gospel of Mark also fails to mention a restoration of Peter. Although Luke describes Peter as a leader in the Jerusalem church, people are suspicious of his escape from prison in Acts 12. After this event, Peter is hardly mentioned in Acts and seems to have been supplanted by James, the Lord’s brother. It just might be the case Peter is not as important to the foundational level of the Church as tradition has made him out to be.

Peter: False Disciple and Apostate is a brief but extremely well-researched book that argues a single point in a short 100 pages. Gundry makes his case well, although it is a case many will find jarring. Although I imagine the book will cause much “weeping and gnashing of teeth,” the book will set the agenda for Matthean theology for years to come.