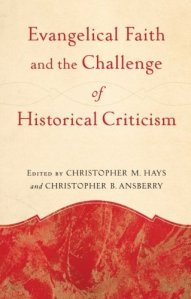 Just yesterday I received a new book edited by Christopher M. Hays and Christopher B. Ansberry, The Evangelical Faith and the Challenge of Historical Criticism (Grand Rapids, Mich.: Baker, 2013). The book is a collection of essays on somewhat controversial topics raised by biblical scholars who attempt to study the Bible as a historical document and covers some of the same ground as my list few posts. This is just a quick overview of the book although I plan a full review soon. I have only read the chapter on Historical Jesus studies since I am covering that topic right now.

The book is concerned with evangelical scholarship and the findings of historical criticism and argues that a conservative interpreter of the Bible can be both “critical” and “evangelical.” Two clarifications are necessary before reading this book, however. By critical (or “historical criticism” in the title), this book means contemporary scholarship rather than nineteenth century Protestant liberalism. Those two are not always the same. The authors of the essays in this collection are discussing the current state of critical scholarship rather than examples of older Historical Criticism. By evangelical, this book means orthodox Protestants who believe the Bible has authority in matters of faith and practice. Evangelicals are those who understand the Gospel as something that reconciles people to God through the atoning death of Jesus. What is missing in the definition as given on pages 17-18 is a direct reference to inerrancy as defined by the Chicago Statement on Inerrancy. Nor does “evangelical” refer to political conservatism. It is unfortunate that the label “evangelical” has been co-opted by the media to describe American political conservatives from Fred Phelps to George W. Bush.

After an introduction by Hays, there are four chapters covering Old Testament issues (historical Adam, The Exodus, Deuteronomic Covenant, and Prophecy). The sixth chapter on pseudepigraphy and canon is mainly concerned with the idea of an author and the problem of some Pauline letters, James, 2 Peter and the traditional authors of the Gospels. Chapter 8 treats the problem of Paul in his letters versus Paul in Acts. Ansberry and Hays offer some concluding comments on doing “faithful criticism.” These are all current issues in conservative scholarship and most have generated a fairly substantial secondary literature. Google “historical Adam” for example, or read some of the reviews of Peter Enns, Inspiration and Incarnation: Evangelicals and the Problem of the Old Testament. I cannot recommend using the word “myth” in some institutions; even talking about Q is enough to cause problems in some academic circles. For the most part, these are not just controversial: they are raging bitter debates among conservatives, the sorts of issues that can get you fired from a conservative church or seminary.

Every chapter in the book is interesting and worthy of in-depth discussion, but I want to focus my attention on the seventh chapter, which is devoted to studying the Historical Jesus. I asked in the previous post whether an evangelical can use the tools of historical criticism without accepting all the philosophical foundations lurking in the background of these methods. Michael J. Daling and Christopher Hays contribute the chapter on Jesus studies in the book and begin with the simple observation that Historical Jesus studies are among the most productive in biblical scholarship. There are dozens of monographs and essay collections published each year making significant contributions to the study of Jesus and the Gospels and many more less significant contributions. Daling and Hays therefore summarize four particular areas that seem to be perennial points of interest for scholars working in and around the Gospels, although three of their points are all related to miracles.

First, what did Jesus claim about himself? For much of the last 100 years, scholars have read Jesus’ self-designation “son of man” either as eschatological (usually citing Dan 7:14) or as meaning “human” (non-eschatological). If it is eschatological, is Jesus claiming to be a messiah, and if he is, what exactly does “messiah” mean to a first century Jewish audience? Since we are reading the words of Jesus as reported by his later followers, some scholars dismiss Jesus as an eschatological teacher. He was not trying to “establish the kingdom of God” nor did he see himself as fulfilling prophecy in any way.  His later followers thought that about him, but Jesus did not think he was a messiah. On the other hand, it is at least possible Jesus had some messianic self-awareness. Even the most skeptical of scholars will accept as fact that Jesus gathered followers, and that he designated twelve of them as his “apostles.” Almost everyone agrees Jesus taught something about the “kingdom of God,” although there is a great deal of ink spilt on defining what the kingdom was. What would a Jewish audience in Galilee think of a Jewish teacher who gathered twelve disciples and taught about the kingdom of God? It is at least possible (if not likely) they would have heard echoes of the Hebrew Bible and the twelve tribes of Israel. I would include Jesus’ description of his ministry in terms of a wedding celebration another echo of messianic ideas from the Hebrew Bible, and there are many others as well.

Second, Daling and Hays list miracles as a major problem for historical studies of Jesus based on the assumption miracles do not occur. I plan on returning to this issue later, but for now let me observe this is a major dividing point between an evangelical biblical scholar and a non-evangelical since most evangelicals do not dismiss the possibility of miracles occurring before reading the text of the Gospels. This is true for the two “big miracles” Daling and Hays discuss, the virgin birth and the resurrection. For many Christians, these are non-negotiable miracles involving Jesus, so to deny the virgin birth is tantamount to denying the faith! Since we are reading reports of miracles by devoted followers of Jesus, many scholars dismiss them as legend-making. However, if we understand miracles in the context of a messianic Jesus, then healing and resurrection are part of the eschatological landscape. A messiah that does not do miracles is more suspicious, at least from a Second Temple Period perspective. Since the virgin birth became a kind of litmus test to detect liberalism in the early twentieth century, few conservative scholars would openly question why Jesus is presented as “born of a virgin” in Matthew and Luke.

I can certainly recommend The Evangelical Faith and the Challenge of Historical Criticism for readers who want to read more deeply on these controversial topics. The essays are excellent examples of faithful Christians interacting with the tools and methods of historical criticism, asking questions of the text and struggling with issues on an academic level. In most cases, they are open to the possibility that a faithful Christian can hold views that are “less than conservative.”